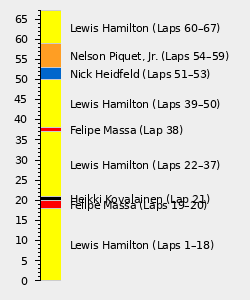 The LXIX Großer Preis Santander von Deutschland, otherwise known as the 2008 German Grand Prix, was the tenth round of the 2008 FIA Formula One World Championship, staged at the Hockenheimring in Baden-Württemberg, Germany, on 20 July 2008.[1][2] The race would see Lewis Hamilton secure an impressive victory for McLaren-Mercedes, after his early domination of the race was ruined by a mid-race Safety Car.[2]

There would be a lot of hype surrounding the race after qualifying, as Hamilton narrowly edged out fellow title rival Felipe Massa in a duel for pole position.[2] Heikki Kovalainen got the sister McLaren into third ahead of Jarno Trulli, while the third man in the title hunt, Kimi Räikkönen, would only manage to claim sixth ahead of Robert Kubica.[2]

However, hopes of Hamilton being challenged were extinguished right at the start, with the #22 McLaren sprinting clear as the lights went out to secure the lead.[2] Massa was duly left to fend off a first corner lunge from Kovalainen for second, as behind Räikkönen was instantly passed by Kubica's BMW Sauber.[2]

Kovalainen had another lunge at Massa into the hairpin on the opening lap, with the subsequent congestion allowing Kubica to shoot past Fernando Alonso and Trulli to claim fourth.[2] The rest of the field would make it through the opening tour without issue, while Hamilton powered away to secure a two second lead.[2]

Hamilton's lead continued to grow during the early stages, as the fight for fourth ebbed and flowed as Räikkönen entered the mix.[2] That quartet would continue to fight through to the first round of stops, with Hamilton having established a twenty second lead by the time he opened the stops on lap eighteen.[2]

However, Hamilton would make his first mistake of the day after his stop, getting caught out on fresh tyres and hence allowing Trulli to pass, before almost colliding with the Toyota at the hairpin.[2] The Brit therefore had to wait for Trulli to stop at the end of the lap to safely make progress, although the sheer size of his lead meant that the #22 McLaren remained well clear of Massa.[2]

The race settled down as the rest of the field made their stops, with the order remaining unchanged through to lap 36.[2] At that point Timo Glock suffered a suspension failure and spun straight into the pitwall, bringing out the Safety Car as debris was strewn across the track.[2]

McLaren surprisingly gambled during the SC, opting not to pit Hamilton as the rest of the field dived in for their second stops.[2] The Brit hence had to escape up the road before making his second stop, with two cars in the form of Nick Heidfeld and Nelson Piquet, Jr. between him and Massa.[2]

Hamilton duly broke away at the restart, and set a succession of quick laps as Massa fought with Piquet and Heidfeld.[2] The McLaren duly stopped on lap 50 and emerged behind Kovalainen in fifth, before being instantly promoted to fourth once Heidfeld stopped.[2]

Piquet was left in the lead, as Hamilton breezed past Kovalainen and then Massa with significantly fresher tyres.[2] The Brit then caught and passed Piquet with a handful of laps to go, ensuring that he was in prime position to secure the race win.[2]

With that the race was over, with Hamilton able to secure victory by six seconds from Piquet, the Brazilian's maiden podium finish.[2] Massa ran out of time to get ahead of his compatriot and hence had to settle for third, while Heidfeld secured fourth ahead of Kovalainen, Räikkönen, Kubica and Sebastian Vettel.[2]

Lewis Hamilton picked up his third win of the campaign on home soil to claim 48 points at the halfway point in the season, as well as the Championship lead. However, both Felipe Massa and Kimi Räikkönen had scored 48 points in the opening three rounds of the Championship, with Hamilton only deemed ahead on countback. Furthermore, Robert Kubica was just two behind in fourth to make it a four-horse race heading into the second half of the season, while Nick Heidfeld was twelve off the lead in fifth.

In the Constructors Championship it was Ferrari who led the charge heading into the second half of the season, leaving the British Grand Prix with 96 points. BMW Sauber would sit in second at the start of the second phase of the campaign, fourteen off the lead, with a ten point gap between themselves and McLaren-Mercedes in third. Toyota were next having overtaken Red Bull-Renault in the UK, with only Force India-Ferrari and the withdrawn Super Aguri-Honda squads having failed to score in the first half of the season.

The full entry list for the 2008 German Grand Prix is outlined below:

The full qualifying results for the 2008 German Grand Prix are outlined below:

The full results for the 2008 German Grand Prix are outlined below:

Lewis Hamilton moved clear atop the Championship with victory in Germany, having eked out a four point lead at the head of the hunt. Felipe Massa had retained his second place status on 54 points, while Kimi Räikkönen had slipped a further three behind, having been tied with Massa and Hamilton at the start of the weekend. Robert Kubica, meanwhile, had slipped ten behind, while Nick Heidfeld was seven off of his Polish teammate.

In the Constructors Championship it was still Ferrari who led the charge, leaving Germany with 105 points and the first team to break into triple figures for the campaign. Behind, BMW Sauber had left their home race still in second place, although the Anglo-German alliance of McLaren-Mercedes had closed to within three points of the Swiss-German team. Toyota were head of the next batch of teams, 61 points behind McLaren, with Red Bull-Renault and Renault just one and two points behind the Japanese manufacturer.