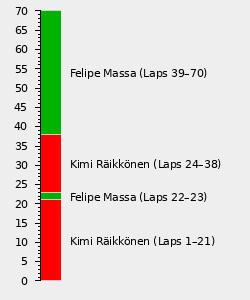 The 2008 French Grand Prix, otherwise known as the XCIV Grand Prix de France, was the eighth round of the 2008 FIA Formula One World Championship, staged at the Circuit de Nevers Magny-Cours in Magny-Cours, France, on 22 June 2008.[1][2] The race would see Felipe Massa claim victory, as race leading teammate Kimi Räikkönen picked up an exhaust issue that caused his pace to collapse mid-race.[2]

It was the Finn who had emerged ahead during qualifying, edging out Ferrari teammate Massa to secure pole position by 0.041s.[2] Lewis Hamilton qualified in third but started from thirteenth after being penalised for hitting Räikkönen in Canada, while Championship leader Robert Kubica would start from fifth.[2]

The start of the race was heralded by news that rain was drifting towards Magny-Cours, and had already washed away some rubber in the morning, although the circuit itself was bone dry for the start.[2] Regardless, Räikkönen would ace his start to claim an early lead from Massa , while Fernando Alonso was passed instantly by Jarno Trulli and Kubica.[2]

Alonso got his revenge on Kubica later during the opening lap, while Hamilton managed to battle his way into tenth.[2] Out front, meanwhile, Räikkönen would set about establishing a lead over Massa, with the two scarlet Ferraris quickly able to drop Trulli's Toyota.[2]

The order at the head of the field soon stabilised, with Räikkönen and Massa running close together, while Alonso could find no way past Trulli, with Kubica chasing him.[2] Hamilton, meanwhile, would move into the points with a dive past teammate Heikki Kovalainen, only to be slapped with a drive-through penalty for cutting turn seven on the opening lap.[2]

Hamilton served the penalty instantly on lap fourteen, and hence dropped back to his starting position of thirteenth.[2] Out front, meanwhile, the two Ferraris suddenly improved their pace and began lapping a second quicker than Trulli, as Alonso became the first of the leaders to make their first stop on lap sixteen.[2]

Trulli and Kubica stopped four laps later, followed on successive laps by Räikkönen and Massa, with the Finn emerging with a healthy lead over Massa.[2] Their strong pace continued after the stop, with Trulli still holding third while Kubica had jumped Alonso.[2]

However, the picture at the head of the field would soon change, for an exhaust failure for Räikkönen on lap thirty saw the Finn's pace waver.[2] Massa began to eat away at his teammate's lead, and would pass the Finn unopposed on lap 39, before establishing a ten second lead before the second round of stops.[2]

Massa held the lead through the stops, and was able to ease his pace in the final stint, just as rain began to fall on the circuit.[2] Räikkönen, meanwhile, saw his right-hand exhaust completely fall apart, although fears of being challenged by Trulli were eliminated when the Italian came under attack from Kovalainen in the closing stages.[2]

Trulli would, however, hold onto third, scoring his first podium finish since the 2005 Spanish Grand Prix, as Massa cruised across the line to secure victory.[2] Räikkönen trailed in a distant second to secure the Scuderia's third one-two of the campaign, as both drivers moved up in the Championship standings.[2] Elsewhere, Kubica would finish in fifth ahead of Mark Webber, Nelson Piquet, Jr. registered his points finish in seventh, while Alonso claimed the final point in eighth.[2]

Victory for Robert Kubica ensured that the Polish driver topped the Drivers' Championship for the first time in his career, leaving Canada with 42 points and a four point lead. Lewis Hamilton had made way for the Pole, with Felipe Massa having moved level with the Brit on 38 points, but behind on countback. Kimi Räikkönen, meanwhile, had slipped to fourth ahead of Nick Heidfeld, with seventeen drivers on the score sheet.

In the Constructors Championship it was Ferrari who continued to lead the charge, although they had seen their advantage all but eliminated. Indeed, BMW Sauber's first one-two meant that the German-Swiss alliance had moved onto 70 points for the season, and shot seventeen clear of McLaren-Mercedes in third. Elsewhere, Red Bull-Renault were in fourth ahead of Toyota, while Honda had moved back ahead of Toro Rosso-Ferrari.

The full entry list for the 2008 French Grand Prix is outlined below:

The full qualifying results for the 2008 French Grand Prix are outlined below:

The full results for the 2008 French Grand Prix are outlined below:

Victory for Felipe Massa carried the Brazilian racer to the top of the Championship hunt again, leaving Magny-Cours with a two point advantage. Robert Kubica had made way for the Brazilian but remained a title contender with 46 points, while Kimi Räikkönen had moved up to third with 43. Lewis Hamilton was next up in fourth, ten points behind Massa, while Nick Heidfeld was a further ten behind in fifth.

In the Constructors Championship Ferrari had picked up their third one-two to enhance their Championship lead, moving onto 91 points for the campaign. BMW Sauber had slipped seventeen points behind in second, while they held a sixteen point margin over McLaren-Mercedes in third. A 34 point gap then split McLaren from Red Bull-Renault in fourth, with Toyota just a point off the Austrian entry in fifth.