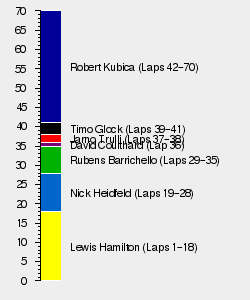 The 2008 Canadian Grand Prix, officially the XLVI Grand Prix du Canada, was the seventh race of the 2008 FIA Formula One World Championship, staged at the Circuit Gilles Villeneuve in Montreal, Canada, on 8 June 2008.[1][2] The race, which was the 30th Canadian Grand Prix to be held at the Circuit Gilles Villeneuve, would see Robert Kubica secure his and BMW Sauber's first and only F1 victory.[2]

Qualifying had seen Championship leader Lewis Hamilton stamp his authority on the rest of the field, securing a dominant pole position for McLaren-Mercedes.[2] Kubica would start from second ahead of Kimi Räikkönen and Fernando Alonso, while Felipe Massa found himself down in sixth alongside Nico Rosberg.[2]

After qualifying the drivers raised their concerns about the track surface, with the apexes of turns two, seven and ten showing evidence of breaking up during Saturday's running.[2] Remedial work was carried out overnight to rectify these issues, although the resurfaced sections were not able to properly set before the race.[2]

The start of the race saw Hamilton ease away from Kubica to claim an early lead, while Räikkönen slotted into third.[2] Behind, Rosberg got the jump on Alonso to secure fourth, while Heikki Kovalainen slipped behind Rubens Barrichello, but muscled his way back ahead of the Honda.[2]

The race soon settled down, with Hamilton escaping from Kubica by half a second a lap to establish a five second lead.[2] The Polish racer himself had a small margin over Räikkönen, while Rosberg had Alonso and Massa for company as the race became something of a procession.[2]

That was not to last, however, for Adrian Sutil was forced to stop at turn three on lap seventeen after a gearbox failure, and pulled his car off to the side.[2] Initially the Force India-Ferrari seemed enough out of harm's way that it could be dragged to safety without issue, only for a sudden fire at the back of the car to cause the marshals to call for the Safety Car.[2]

The appearance of the Safety Car caused chaos in the pits when they were reopened on lap nineteen, with the top seven of the field all stopping.[2] Räikkönen and Kubica both got the jump on Hamilton, with Räikkönen released alongside Kubica's BMW Sauber, only for both to have to stop at the end of the pitlane due to a red light.[2]

Hamilton was behind them and, having not seen the red light, speared straight into the back of Räikkönen, destroying both the Ferrari and his McLaren.[2] Rosberg also got himself tangled in the collision by hitting the back of the McLaren, and had to limp back for a new nose as a result.[2]

Nick Heidfeld duly emerged from the chaos at the head of the field, trailed by Barrichello and Mark Webber, while Kubica was down in ninth.[2] Heidfeld duly aced the restart to sprint clear of Barrichello, with the Brazilian's lack of pace causing a train of cars and limited Kubica's ability to climb back up the order.[2]

As a result of Barrichello's poor pace, Heidfeld established a huge 26 second lead by lap 30, and was able to pit and rejoin ahead of his Polish teammate.[2] Kubica, on a low-fuel two-stop, quickly dived past his teammate to move ahead, before the rest of the Barrichello train was broken apart by pitstops.[2]

Now with clear air ahead Kubica set about escaping from Heidfeld, establishing a thirteen second lead when Timo Glock finally stopped on lap 43.[2] Indeed, Heidfeld would subsequently lose more time as he was attacked by Alonso and later Coulthard, and hence allowed Kubica to pit for a second time and rejoin without losing the lead.[2]

With that the race was run, with Kubica making history as the first Polish driver to secure a race victory in a World Championship Grand Prix.[2] Heidfeld kept Coulthard at bay to make in a BMW Sauber one-two, with the Scot running out of fuel moments after crossing the finish line.[2] Glock, a resurgent Massa, Jarno Trulli, Barrichello and Sebastian Vettel secured the remaining points.[2]

Victory, combined with a non-score for Kimi Räikkönen, meant that Lewis Hamilton left Monte Carlo with the Championship lead, holding 38 points and a three point advantage. Räikkönen slipped to second after finishing ninth in Monaco, while Felipe Massa had moved to within a point of his teammate in third. Robert Kubica was just two further back in fourth, before a twelve point gap split the Pole from his teammate Nick Heidfeld.

In the Constructors Championship Ferrari continued to lead the charge, leaving Monaco with 69 points to their credit. McLaren-Mercedes had moved into second courtesy of Hamilton's second win, moving a point ahead of BMW Sauber as they tried to kick-start their season once again. Williams-Toyota and Red Bull-Renault were next, level on fifteen points, while Force India-Ferrari had once again failed to score.

The full entry list for the 2008 Canadian Grand Prix is outlined below:

The full qualifying results for the 2008 Canadian Grand Prix are outlined below:

The full results for the 2008 Canadian Grand Prix are outlined below:

Victory for Robert Kubica ensured that the Polish driver topped the Drivers' Championship for the first time in his career, leaving Canada with 42 points and a four point lead. Lewis Hamilton had made way for the Pole, with Felipe Massa having moved level with the Brit on 38 points, but behind on countback. Kimi Räikkönen, meanwhile, had slipped to fourth ahead of Nick Heidfeld, with seventeen drivers on the score sheet.

In the Constructors Championship it was Ferrari who continued to lead the charge, although they had seen their advantage all but eliminated. Indeed, BMW Sauber's first one-two meant that the German-Swiss alliance had moved onto 70 points for the season, and shot seventeen clear of McLaren-Mercedes in third. Elsewhere, Red Bull-Renault were in fourth ahead of Toyota, while Honda had moved back ahead of Toro Rosso-Ferrari.