Formula 1 Wiki
Register
Don't have an account?
Sign In
Advertisement
in: 2008 Grands Prix, Formula One races in the United Kingdom, British Grand Prix 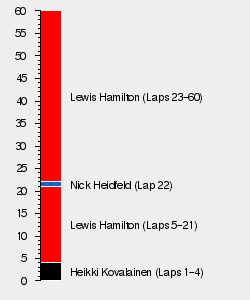 The 2008 British Grand Prix, otherwise known as the LXI Santander British Grand Prix, was the ninth round of the 2008 FIA Formula One World Championship, staged at the Silverstone Circuit in Northamptonshire, UK, on 6 July 2008.[1][2] The race would see Lewis Hamilton claim what has been widely regarded as his greatest F1 victory, dominating the Grand Prix in changeable conditions.[2]

Heavy rain on race morning left the Silverstone Circuit soaked, although as the race start approached the rain cleared and the circuit began to dry.[2] That meant that the entire field started on intermediate tyres, while Nico Rosberg decided to start in the pitlane after making several setup changes to compensate for the conditions.[2]

The top three on the grid all struggled to get off the line, allowing Hamilton to charge past Räikkönen and Webber to challenge Kovalainen for the lead.[2] The two McLarens touched wheels in Copse before Kovalainen emerged with the lead ahead of Hamitlon, while Räikkönen muscled his way past Webber for third.[2]

Indeed, qualifying would be as good as it got for Webber, for the Australian racer would spin at the start of the Hangar Straight, tumbling to the back of the field.[2] Massa also got caught out by the conditions and spun at Bridge, while David Coulthard and Sebastian Vettel collided and hence ended up in the gravel.[2]

The top three pulled clear during the early stages, as Massa spun for a second time while Fernando Alonso moved past Nelson Piquet, Jr. and Nick Heidfeld.[2] Kovalainen would lead through until lap five, when Hamilton dived inside his teammate into Stowe, with the Finn managing to prevent Räikkönen following the Brit through.[2]

With that Hamilton was away, lapping over a second a lap quicker than his teammate to build a six second lead by lap ten.[2] Kovalainen, meanwhile, had only just established himself in second when he spun, allowing Räikkönen through to entertain hopes of challenging Hamilton.[2]

The Ferrari emerged as the stronger car as a dry line began to form, resulting in the #1 car closing in on the #22 McLaren as the first stint came to its conclusion.[2] Räikkönen was the first to stop and stayed on the same set of inters, Ferrari gambling on the track continuing to dry at the same rate, while McLaren swapped Hamilton onto a fresh set of intermediates a lap later.[2]

Moments after Hamilton exited the pits the rain returned, allowing the Brit to instantly establish an eight second lead over the Ferrari.[2] Räikkönen was instead caught by Kovalainen and Heidfeld, with the BMW Sauber passing both Finns as they focused on each other fighting for second.[2]

Räikkönen abandoned the fight with Kovalainen on lap 30 as he stopped for fresh tyres, with the rain continuing to fall.[2] Kovalainen followed him in a few laps later having been passed by Robert Kubica, while the two Hondas became the first drivers to stop for extreme wets, with Jenson Button queuing behind Rubens Barrichello.[2]

Despite the worsening conditions Hamilton would opt to take a fresh set of inters at his second stop, having established a thirty second lead over Heidfeld.[2] That appeared to have been a mistake at the Brit had suffered a spin shortly before his stop, while Barrichello was running nine seconds a lap quicker as he climbed through the midfield.[2]

Indeed, Barrichello would get as high as second with moves on Heidfeld and Jarno Trulli, Kubica having retired after a spin into the gravel, before being forced to make a quick "splash and dash" for fuel late on.[2] That dropped him to third, while a late stop for Trulli left Kovalainen in fourth, only for the #23 McLaren to spin and let Alonso and Räikkönen through.[2]

Out front, meanwhile, Hamilton eased clear in the final stint to claim victory by over a minute, the largest winning margin since the 1995 Australian Grand Prix.[2] Heidfeld was second ahead of Barrichello, claiming his first podium since leaving Ferrari, with Räikkönen and Kovalainen ahead of Alonso.[2] Trulli and Kazuki Nakajima secured the remaining points.[2]

Victory for Felipe Massa carried the Brazilian racer to the top of the Championship hunt again, leaving Magny-Cours with a two point advantage. Robert Kubica had made way for the Brazilian but remained a title contender with 46 points, while Kimi Räikkönen had moved up to third with 43. Lewis Hamilton was next up in fourth, ten points behind Massa, while Nick Heidfeld was a further ten behind in fifth.

In the Constructors Championship Ferrari had picked up their third one-two to enhance their Championship lead, moving onto 91 points for the campaign. BMW Sauber had slipped seventeen points behind in second, while they held a sixteen point margin over McLaren-Mercedes in third. A 34 point gap then split McLaren from Red Bull-Renault in fourth, with Toyota just a point off the Austrian entry in fifth.

The full entry list for the 2008 British Grand Prix is outlined below:

The full qualifying results for the 2008 British Grand Prix are outlined below:

The full results for the 2008 British Grand Prix are outlined below:

Lewis Hamilton picked up his third win of the campaign on home soil to claim 48 points at the halfway point in the season, as well as the Championship lead. However, both Felipe Massa and Kimi Räikkönen had scored 48 points in the opening three rounds of the Championship, with Hamilton only deemed ahead on countback. Furthermore, Robert Kubica was just two behind in fourth to make it a four-horse race heading into the second half of the season, while Nick Heidfeld was twelve off the lead in fifth.

In the Constructors Championship it was Ferrari who led the charge heading into the second half of the season, leaving the British Grand Prix with 96 points. BMW Sauber would sit in second at the start of the second phase of the campaign, fourteen off the lead, with a ten point gap between themselves and McLaren-Mercedes in third. Toyota were next having overtaken Red Bull-Renault in the UK, with only Force India-Ferrari and the withdrawn Super Aguri-Honda squads having failed to score in the first half of the season.