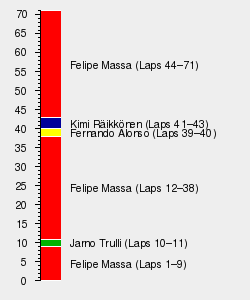 The full entry list for the 2008 Brazilian Grand Prix is shown below:

Räikkönen was just off Hamilton's pace, followed by Kubica, Heikki Kovalainen, and Fernando Alonso. Webber was seventh, still within a second of Massa's time.[1]

Cars which competed in the final session of qualifying were not allowed to refuel before the race, and as such carried more fuel than in the previous sessions.[2]

At the conclusion of the race, a relieved Hamilton exclaimed over the team radio "That was so pretty close, but you guys did a fantastic job this year."[5]

Standings after the race

Retrieved from "https://f1.fandom.com/wiki/2008_Brazilian_Grand_Prix?oldid=80743"
Community content is available under CC-BY-SA unless otherwise noted.