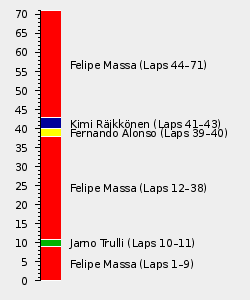 The 2008 Brazilian Grand Prix, officially the XXXVII Grande Prêmio do Brasil was the eighteenth and final round of the 2008 FIA Formula One World Championship, staged at the Autódromo José Carlos Pace in São Paulo, Brazil, on 2 November 2008.[1][2] The race would see Lewis Hamilton and Felipe Massa duel for the 2008 World Championship, which would ultimately be decided by an overtake on the final lap.[2]

Arriving in Brazil it was Hamilton who held the advantage in the Championship, holding a seven point lead over Massa.[2] Likewise, they're teams McLaren-Mercedes and Ferrari would arrive with the Constructors Championship to fight for, with the latter starting the finale on the upper-hand with eleven points in hand.[2]

Qualifying for the finale saw Massa gain an advantage, as he claimed pole position ahead of Jarno Trulli.[2] Hamilton would manage to secure fourth behind Massa's teammate Kimi Räikkönen, with the Brit knowing that fifth place in the race, regardless of Massa's finishing position, would get him the title.[2]

Rain would plague race day, with a late-shower resulting in everyone bar Robert Kubica changing their tyres to intermediates on the grid.[2] The Polish racer instead gambled on slicks, although he would dive into the pits at the end of the formation lap having found the conditions too tricky, meaning he started from the pitlane.[2]

The start saw Massa sprint into an early lead, with the rest of the field getting away in grid order to leave Hamilton in fourth behind Räikkönen.[2] At the back, meanwhile, David Coulthard's final race ended at the second corner when he was tapped into a spin by Nico Rosberg, which pushed him into Kazuki Nakajima and broke his suspension.[2]

Nelson Piquet, Jr. then had an accident all on his own at turn three to bring out the Safety Car, with the circuit already drying enough for some to gamble on slicks even behind the SC.[2] When the race resumed on lap five Massa retained the lead from Trulli, Räikkönen and Hamilton, while Rosberg and Jenson Button made early stops for slicks a lap later.[2]

The latter duo's strong pace soon saw the rest of the field flood into the pits, although there would be some major changes to the order.[2] Indeed, while Massa had retained the lead, Sebastian Vettel had leapt into second, Fernando Alonso had jumped to third, Räikkönen moved ahead of Trulli but dropped to fourth and Giancarlo Fisichella streaked up from last to fifth, and was harassing Räikkönen having been the first to stop.[2]

Massa and Vettel exchanged several fastest laps at the head of the field, as Hamilton found himself stuck in sixth behind Fisichella.[2] Indeed, it was only on lap eighteen that the Brit finally elbowed his way through, before being promoted an additional place when a low-fuelled Vettel stopped on lap 27.[2]

The order settled after that, with the second round of stops seeing Massa retain the lead ahead of Alonso, while Räikkönen remained in third ahead of Hamilton.[2] That order would hence give Hamilton the Championship title, and even a charging Vettel could do little to affect the title picture.[2]

However, the skies over São Paulo were darkening, and on lap 63 the rain returned, prompting Heidfeld to dive in for inters very early.[2] The rain increased and Alonso and Räikkönen dived in on lap 65, with Hamilton and Vettel following in a lap later, while Massa remained out until lap 67.[2]

Timo Glock was the only driver to remain on slicks, and hence jumped to fourth in the field as the rain intensified in the final two laps.[2] Hamilton, meanwhile, had slipped to sixth as Vettel had elbowed his way ahead of him, and hence started the final lap looking as though he would miss-out on the title for a second season.[2]

Massa duly crossed the line to claim the race victory, while Alonso and Räikkönen completed the podium.[2] Hamilton, meanwhile, would remain in sixth, until he and Vettel passed a very slow Glock, whose pace had collapsed on the final lap, at the final corner, promoting the Brit to fifth.[2] That simultaneously made Hamilton the World Champion by a single point, and broke the hearts of Massa, Ferrari and the 80,000 strong home crowd.[2]

The Championship fight was down to just two drivers ahead of the season finale in Brazil, with Lewis Hamilton and Felipe Massa the two pretenders. Hamilton would hold a fair advantage ahead of the finale, arriving in Brazil with a seven point lead, and would therefore win the title if he finished fifth or higher, regardless of what Massa could do. Massa, meanwhile, would have to either win the race with Hamilton lower than fifth, or finish second with Hamilton finishing eighth or out of the points.

The Constructors Championship would also go down to the finale, with just eleven points separating the top two in the field. In a reversal of the Drivers' Championship, however, it was Ferrari would would land in São Paulo with the advantage, and would win the title if they outscored McLaren-Mercedes by seven points. The Anglo-German squad, meanwhile, would likely have to claim second and fifth minimum to beat the Scuderia, although that would not be enough if Ferrari scored more than a point.

The full entry list for the 2008 Brazilian Grand Prix is outlined below:

The full qualifying results for the 2008 Brazilian Grand Prix are outlined below:

The full results for the 2008 Brazilian Grand Prix are outlined below:

Lewis Hamilton was declared the 2008 FIA Formula One World Championship Champion, ending the season with 98 points and five race wins. Felipe Massa hence fell shy of a maiden crown by just a single point with six victories, while Kimi Räikkönen claimed third on the final day with 75 points. Robert Kubica was next, level on 75 with the Finn, while Fernando Alonso secured fifth with 61 points.

In the Constructors Championship it was Ferrari who had emerged as the 2008 Constructors Championship, having scored 172 points across the season. McLaren-Mercedes would end the season as runners-up in second, claiming 151 points, while BMW Sauber may have rued their decision to stop development early on, as they finished third on 135 points. Renault and Toyota would completed the top five, while Force India-Ferrari were the only team not to score having completed the full F1 campaign.

Retrieved from "https://f1.fandom.com/wiki/2008_Brazilian_Grand_Prix?oldid=89061"
Community content is available under CC-BY-SA unless otherwise noted.