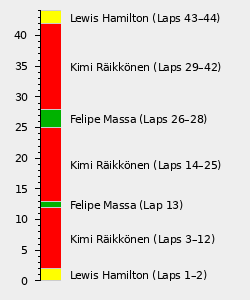 The 2008 Belgian Grand Prix, formally known as the 2008 Formula 1 ING Belgian Grand Prix, was the thirteenth round of the 2008 FIA Formula One World Championship, staged at the Circuit de Spa-Francorchamps in Spa, Belgium, on 7 September 2008.[1][2] The race would see Felipe Massa declared as the victor, after a controversial 25 second time penalty dumped Lewis Hamilton from first to third.[2]

Qualifying had seen the two title protagonists duel for pole position, with Hamilton emerging ahead of Massa by 0.340s.[2] Their teammates Heikki Kovalainen and Kimi Räikkönen would share the second row, while Nick Heidfeld beat Fernando Alonso to fifth.[2]

Race morning would dawn with rain falling on the Spa-Francorchamps circuit, although as the field lined up for the start the circuit was dry enough for the field to start on slicks.[2] Indeed, everyone bar Nelson Piquet, Jr. would start on the softest Bridgestone slicks available, while the Brazilian opted for the harder compound after qualifying in the middle of the pack.[2]

The greasy track surface made the start treacherous, with Kovalainen one of several losers as he slithered away slowly, while Piquet shot up to seventh after acing his getaway.[2] Jarno Trulli also made a strong start but was whacked from behind by Sébastien Bourdais, while Kovalainen made contact with Nick Heidfeld and Giancarlo Fisichella removed himself from contention on the back of Kazuki Nakajima.[2]

Out front, meanwhile, Hamilton had eased into an early lead ahead of Massa, although the Brazilian was powerless to prevent teammate Räikkönen from breezing past down the Kemmel Straight.[2] The Finn then moved into the lead on the second lap as Hamilton suffered a spin at La Source, with Räikkönen duly easing clear over the following laps.[2]

Behind, Kovalainen would collide with Mark Webber shortly before the first round of stops, as Hamilton became the first of the leaders on lap eleven.[2] Räikkönen and Massa stopped on the following laps, with the order remaining stable at the head of the field as a result.[2]

The order remained stable through the second stint too, with Räikkönen and Hamilton both stopping on lap 25 for their second and final stops.[2] Massa stopped three laps later and remained behind Hamilton, with Hamilton himself able to close onto the back of Räikkönen as temperatures began to tumble both in air and on track.[2]

Indeed, the slump in temperatures heralded the arrival of rain, which began thundering down on the circuit on lap 41, with Hamilton eliminating the rest of the gap between himself and Räikkönen.[2] The Brit duly tried a lunge inside the #1 Ferrari into the Bus Stop chicane, only to run wide and cut the corner, and hence emerge ahead of Räikkönen.[2] Hamilton immediately eased off the throttle and let the Finn back through, before instantly chucking his #22 McLaren-Mercedes back down the inside of the Ferrari to claim the lead at La Source.[2]

The duo continued to battle as Hamilton's antics came under investigation, with Räikkönen briefly leading again after Hamilton had to avoid a recovering Nico Rosberg, before spinning himself on lap 42.[2] The Finn's race then came to an end with a half-spin into the wall at Blanchimont, handing Hamilton an unassailable lead over Massa.[2]

Indeed, Hamilton would sweep across the line to claim victory, ahead of Massa and Heidfeld, with the Brit believing that he had acted correctly after cutting the chicane.[2] However, in the hours after the race it was announced that Hamilton had been awarded a 25 second time penalty for cutting the chicane and gaining an advantage, leaving Massa as the race winner.[2]

McLaren's appeal against the decision was taken to the FIA International Court of Appeal, although it was rejected by the Court on 23 September 2008 on the grounds that a 25 second time penalty cannot be challenged.[3]

Victory for Felipe Massa ensured that the Brazilian racer moved back up to second in the Championship hunt, and reduced the gap to title leader Lewis Hamilton to six points. Yet, Hamilton's real-time lead had effectively grown by a point as Massa had to overhaul Kimi Räikkönen to secure second, with the Finn himself having slipped thirteen points off the lead in third. Furthermore, Räikkönen was just two points ahead of Robert Kubica in fourth, while Heikki Kovalainen had moved back into the top five in fifth.

In the Constructors Championship Ferrari had retained their grip on the head of the title charge, although their advantage had been cut to just eight points. Indeed, McLaren-Mercedes were continuing to chip away at the Scuderia's lead, and had established a fair margin of seventeen points over BMW Sauber. Behind Toyota had moved ten clear of Renault to enhance their hold on fourth, while Force India-Ferrari were still the Championship's only non-scorers.

The full entry list for the 2008 Belgian Grand Prix is outlined below:

The full qualifying results for the 2008 Belgian Grand Prix are outlined below:

The full results for the 2008 Belgian Grand Prix are outlined below:

The controversial conclusion to the Belgian Grand Prix saw Felipe Massa move right onto the back of the Championship leader Lewis Hamilton, leaving Spa just two off the lead. Indeed, Hamilton had moved onto 76 points to the Brazilian's 74, with the pair effectively the two main protagonists for the crown. Behind, Robert Kubica had remained mathematically in the hunt as he climbed to third ahead of Kimi Räikkönen, while Nick Heidfeld had moved back ahead of Heikki Kovalainen.

In the Constructors Championship Ferrari had managed to extend their lead as a result of the post-Spa fallout, leaving the Belgian circuit with a twelve point advantage. Indeed, McLaren-Mercedes had lost ground as a result of Hamilton's demotion, leaving Spa on 119 points, and just twelve ahead of BMW Sauber in third. Indeed, those three were the only teams capable of taking the Constructors crown, with Toyota 90 points behind Ferrari with five races to go.