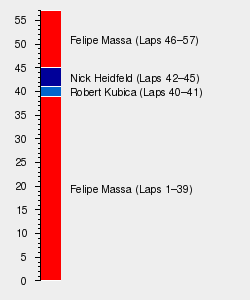 The 2008 Bahrain Grand Prix, officially the V Gulf Air Bahrain Grand Prix, was the third round of the 2008 FIA Formula One World Championship, staged at the Bahrain International Circuit in Sakhir, Bahrain, on 6 April 2008.[1][2] The race would see Felipe Massa beat teammate Kimi Räikkönen to victory, as both Ferraris overcame Robert Kubica.[2]

Qualifying had seen Kubica become the first Polish driver to secure pole position for a Grand Prix, beating Massa in Q3 by 0.027s.[2] Lewis Hamilton and Räikkönen would share the second row, while Heikki Kovalainen and Nick Heidfeld shared the third.[2]

The start of the race would see Massa make the best start, sprinting into the first corner ahead of Kubica to snatch the lead.[2] Behind, Hamilton got a poor launch and hence had to battle his anti-stall system, dumping him back into the pack and allow Räikkönen to move into third unopposed.[2]

Hamilton would run in ninth after the first corner, although that got even worse when he misjusdged a lunge on Fernando Alonso into turn four and removed his front wing on the back of the Renault.[2] The Brit was left to scramble back to the pits for repairs, while Alonso continued with damage to his diffuser.[2]

Unaffected by all of this was Massa, who quickly established a lead over Kubica's BMW Sauber in the early stages, leaving the Pole to defend from Räikkönen.[2] However, Kubica's resistance would be broken before the end of lap three, the #1 Ferrari diving past the #4 BMW Sauber into turn four, with Räikkönen soon escaping from Kubica.[2]

The order stabilised after that, with Massa leading Räikkönen with a comfortable margin, while Kubica secured a safe third ahead of his teammate Heidfeld.[2] Elsewhere, Sebastian Vettel had dropped out after multiple collisions, while Hamilton had made very little ground, having only passed Nelson Piquet, Jr. and Anthony Davidson to run in sixteenth.[2]

Into the first round of stops and Kubica was the first to stop, sweeping in on lap seventeen to confirm that his pole effort had been dictated by fuel load rather than outright pace.[2] Räikkönen and Jarno Trulli were next to come in on lap twenty, Massa pitted on lap 21 without losing the lead, while Heidfeld and Kovalainen completed the rotation on the same lap.[2]

Räikkönen set about making his bid for the lead at the final round of stops, managing to chip a few hundredths out of Massa's lead a lap to close the gap from six seconds to three.[2] Behind, the order was fairly static, with Hamilton unable to move up the field and challenge for points, while Alonso was slowly sliding down the field as damage dictated his pace.[2]

The second round of stops came and went without issue, with Räikkönen stopping a lap earlier than Massa and was hence unable to challenge the Brazilian as he had in Malaysia.[2] Behind, Kubica emerged from his stop still with a safe margin over Heidfeld having briefly led the race, while Hamilton only gained one place in the final pit-phase, moving into thirteenth.[2]

With that the race was run, with Massa leading Räikkönen across the line by three seconds to secure an ominous one-two for Ferrari, and enforce his intentions to make a title bid.[2] Kubica duly completed the podium ahead of Heidfeld, while Kovalainen set fastest lap despite running in a distant fifth.[2] Trulli, Mark Webber and Nico Rosberg completed the points, with Hamilton trailing across the line a lap down in thirteenth.[2]

Lewis Hamilton had maintained his early Championship lead at the Malaysian Grand Prix, fifth place moving him onto fourteen points after the opening two rounds. Kimi Räikkönen, meanwhile, had been the big winner both on and off track, leaping up into second with eleven, albeit level on points with Nick Heidfeld. Heikki Kovalainen was just a point further behind in fourth, with Robert Kubica completing the top five.

In the Constructors Championship McLaren-Mercedes continued to lead the way, leaving Malaysia on 24 points and with the same five point lead that they had started the weekend with. BMW Sauber had retained second, while Ferrari had leapt into third, but had less than half the points of McLaren after the opening two rounds. Williams-Toyota and Renault then completed the top five, with eight constructors on the board.

The full entry list for the 2008 Bahrain Grand Prix is outlined below:

The full qualifying results for the 2008 Bahrain Grand Prix are outlined below:

The full results for the 2008 Bahrain Grand Prix are outlined below:

Kimi Räikkönen had moved to the top of the Championship after his second placed finish in Bahrain, holding nineteen points to his name after three rounds. He hence had a three point lead over second placed Nick Heidfeld, while former leader Lewis Hamilton had slipped five off the lead in third. The Brit was then level on points with both Robert Kubica and Heikki Kovalainen, while Bahrain race winner Felipe Massa saw in sixth.

In the Constructors Championship BMW Sauber had left Bahrain at the head of the hunt, and moved on to 30 points for the season signalling a potential title bid. Ferrari were, however, just a point behind in second, while McLaren-Mercedes had only slipped two behind, having led the Championship before the race. Williams-Toyota and their engine suppliers Toyota then completed the top five, with both Honda powered teams and Force India-Ferrari yet to score.

Retrieved from "https://f1.fandom.com/wiki/2008_Bahrain_Grand_Prix?oldid=88458"
Community content is available under CC-BY-SA unless otherwise noted.