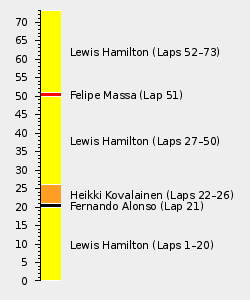 The 2007 United States Grand Prix, otherwise advertised as the XXXVI RBS United States Grand Prix was the seventh round of the 2007 FIA Formula One World Championship, staged at the Indianapolis Motor Speedway in Indiana, USA, on 17 June 2007.[1][2] The race, which would see future World Champion Sebastian Vettel make his Grand Prix debut, was won by rookie racer Lewis Hamilton after a race long duel with his teammate Fernando Alonso.[2]

Vettel got his chance to make his F1 debut with BMW Sauber, for their second driver Robert Kubica was unable to race after his heavy accident in Canada.[2] The German youth, then a member of the Red Bull Junior Team, would partner Nick Heidfeld for the US Grand Prix at the expense of his Formula Renault 3.5 Series title bid.[2]

Vettel would impress during qualifying, claiming seventh just two places behind veteran teammate Heidfeld.[2] Out front, meanwhile, the session would be dominated by the two McLaren-Mercedes, with Hamilton edging out teammate Alonso to claim pole position after exchanging barrages of quick times.[2]

After their intense duel in qualifying all eyes would be on the McLarens at the start of the race, with both making fairly even getaways.[2] As a results, Hamilton would instantly dart to the inside of the circuit to belay any dive from Alonso into the first corner, with the Spaniard hence having to settle for second.[2]

However, there would be drama behind, as Vettel ran wide before Ralf Schumacher misjudged his turn-in point and slammed into the side of David Coulthard.[2] That contact destroyed the Toyota's front-right suspension, with the pair duly sliding into Rubens Barrichello, who was left with damage.[2]

Giancarlo Fisichella would then go to the back of the field with a pirouette of his own making at turn four, as the order began to stabilise.[2] Hamilton would hence maintain a lead over Alonso, which settled at two seconds, with Felipe Massa giving chase in the #5 Ferrari.[2] Heidfeld and Heikki Kovalainen were next ahead of Kimi Räikkönen, whom had been jumped by those two at the start, while Vettel found himself fighting at the back of the top ten with Nico Rosberg.[2]

Hamilton and Alonso would ease clear during the first stint, with the duo trading fastest laps as they sprinted towards their first stops.[2] As expected it was Hamilton who was the first to blink, diving in on lap 20, although Alonso would only manage one lap more and hence rejoin still behind his rookie teammate.[2]

With Massa and Heidfeld also stopping it was Kovalainen who briefly inherited the lead, while Jarno Trulli found himself in third, splitting the two McLarens.[2] An irate Alonso lost a lot of time barging his way past his former teammate, with Kovalainen stopping on lap 28 to hand the lead back to Hamilton and drop himself back to eighth.[2]

The lead battle would ebb and flow throughout the second stint, with Hamilton consistently losing time behind back markers to allow Alonso to gain ground.[2] This came to a head on lap 38 when a rather stubborn Vitantonio Liuzzi held up Hamilton on the run to the back straight, and hence allowed Alonso to draft alongside his rookie teammate.[2] Hamilton, however, would have the inside line for the first corner, and duly held the lead, further fuelling Alonso's frustration.[2]

Their fight rumbled on through the second stops and into the final stint of the race, with Alonso weaving around behind his teammate in a desperate bid to throw him off.[2] Behind, Massa was in a lonely third place, while Räikkönen was steadily reeling in his teammate having jumped Heidfeld during the second pit phase.[2]

Yet, for all his running nose-to-tail behind his teammate at the head of the field, there would be no late move for victory from Alonso, and hence it was Hamilton who claimed victory in the USA.[2] Behind, Massa cruised across the line a distant third ahead of Räikkönen, with Kovalainen, Trulli, Mark Webber and debutante Vettel claiming the remaining points.[2]

A maiden victory for Lewis Hamilton would put the British rookie back on top of the Drivers' Championship leaving Canada, and with 48 points to his name having yet to finish off the podium. His title defending teammate Fernando Alonso was forced to make way for him and dropped eight behind, while Felipe Massa would leave Montreal fifteen points off the lead. Kimi Räikkönen had likewise lost ground in fourth, with Nick Heidfeld having closed right onto the Finn's tail in fifth.

In the Constructors Championship it was McLaren-Mercedes who once again ended the weekend on top, leaving Montreal with 88 points to their name and a 28 point advantage. Ferrari were still their closest challengers, but would need two strong weekends just to get back on terms with the Anglo-German alliance. BMW Sauber, meanwhile, had enhanced their grip on third ahead of Renault, while Williams-Toyota had held on to fifth.

The full entry list for the 2007 United States Grand Prix is outlined below:

The full qualifying results for the 2007 United States Grand Prix are outlined below:

The full results for the 2007 United States Grand Prix are outlined below:

Retrieved from "https://f1.fandom.com/wiki/2007_United_States_Grand_Prix?oldid=88211"
Community content is available under CC-BY-SA unless otherwise noted.