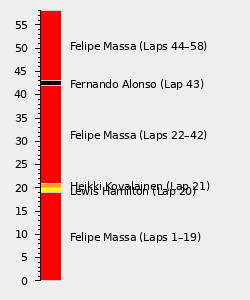 The 2007 Turkish Grand Prix, officially the III Petrol Ofisi Türkiye Grand Prix'si, was the twelfth round of the 2007 FIA Formula One World Championship, staged at the Istanbul Park Racing Circuit near Istanbul, Turkey, on 26 August 2007.[1][2] The race would see Felipe Massa lead Kimi Räikkönen to a Ferrari one-two, as Championship leader Lewis Hamilton hit tyre trouble late on.[2]

Qualifying had seen the two Ferraris go toe-to-toe with the two McLaren-Mercedes of Hamilton and Fernando Alonso, with Massa emerging on pole position ahead of Hamilton.[2] Alonso and Räikkönen shared the second row, while the two BMW Saubers shared the third, Robert Kubica ahead of Nick Heidfeld.[2]

The start of the race saw McLaren make a mess of things, with Räikkönen instantly sprinting past Hamilton, while Alonso was jumped by both BMWs.[2] They, however, were more fortunate than Giancarlo Fisichella, who got a terrible getaway in the Renault, before managing to tip Jarno Trulli into a spin in the middle of the pack.[2] Fortunately neither the #3 Renault nor the #12 Toyota were hit by the rest of the field.[2]

With that the two Ferraris were away, with Massa scampering away with Räikkönen on his tail, while Hamilton lacked the pace to seriously challenge.[2] Alonso, meanwhile, would get increasingly frustrated behind the BMW Saubers during the early laps, unable to force a move on Heidfeld.[2]

The order remained stable, barring an early retirement for Mark Webber, through to the first round of stops, opened by a very early pit visit for Kubica on lap thirteen.[2] Alonso, meanwhile, would have to wait another four laps before Heidfeld finally moved out of his way, before delivering a single flying lap to jump both when he pitted a lap later.[2]

Out front, meanwhile, the two Ferraris would exchange a series of fastest laps before their first stops, with Massa pitting later and emerging ahead.[2] Hamilton, meanwhile, would be the last of the leaders to pit, retaining a lonely third, while Heikki Kovalainen briefly ran in the lead before making his first stop.[2]

The second stint would see Hamilton continue to fade away from the Ferraris, who remained running nose-to-tail at the head of the field.[2] However, Hamilton's longer first stop meant that he was carrying more fuel, and hence increased his hopes of beating the scarlet cars.[2]

Räikkönen was the first of the leaders to pit, but a slow stop ensured that Massa retained the lead, in spite of the fact that the Finn was visibly quicker on-track.[2] Hamilton, meanwhile, would have his bid for victory destroyed by a puncture at turn nine, costing him half a lap and a damaged front wing.[2]

The Brit slumped to fifth behind Heidfeld, with McLaren opting not to replace his damaged front wing.[2] That not only meant that the #2 McLaren failed to challenge the German racer, but would slip back into the clutches of a battling trio of Kovalainen, Nico Rosberg and Kubica.[2]

Out front, meanwhile, Massa would escape from Räikkönen to claim an ominous one-two victory for Ferrari, reigniting their title ambitions in both the Drivers and Constructors Championships. Alonso was a distant third to complete the podium ahead of Heidfeld, while Hamilton just kept Kovalainen, Rosberg and Kubica at bay to secure fifth.[2]

Victory for Lewis Hamilton moved the British rookie seven points clear atop the Championship leaving Hungary, and left him with 80 points to his name. Fernando Alonso had hence lost ground in second, while Kimi Räikkönen had closed the gap to the Spaniard in third, having also overtaken his teammate Felipe Massa. Massa was, however, just a point behind the Finn leaving the Hungaroring, while Nick Heidfeld had maintained his top five status.

In the Constructors Championship Ferrari had been unable to do the damage they needed with McLaren-Mercedes banned from scoring in Hungary, having only closed the gap by eight points. The Anglo-German alliance hence held a twelve point advantage leaving the Hungarian Grand Prix, and had a healthy advantage over third placed BMW Sauber. The German-Swiss alliance was, however, in a very secure third place, with Renault having been unable to close the gap to them once again in Hungary.

The full entry list for the 2007 Turkish Grand Prix is outlined below:

The full qualifying results for the 2007 Turkish Grand Prix are outlined below:

The full results for the 2007 Turkish Grand Prix are outlined below:

Felipe Massa secured his third victory of the campaign, meaning the entire top four in the Championship had three wins apiece with five races to go. However, while the Brazilian had moved back ahead of his teammate Kimi Räikkönen in Turkey, he still trailed Championship leader Lewis Hamilton by fifteen points. Indeed, the Brit had just managed to retain his lead at the head of the pack, with Fernando Alonso closing to within five of the rookie.

In the Constructors Championship it was still McLaren-Mercedes who led the charge, although a maximum score for Ferrari had seriously damaged their advantage. Indeed, the Scuderia would sit just eleven points behind the Anglo-German alliance heading to Italy, with a one-two on home soil potentially enough to put them ahead. Elsewhere, BMW Sauber once again reinforced their third place status ahead of Renault, with no changes to the rest of the contenders.