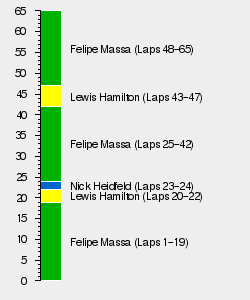 The 2007 Spanish Grand Prix, officially the Formula 1 Gran Premio de España Telefónica 2007, was the fourth race of the 2007 FIA Formula One World Championship, which took place at the Circuit de Catalunya on 13 May 2007.[1][2] The race would see Felipe Massa sweep to victory, fending off race long challenges from the two McLaren-Mercedes of Fernando Alonso and Lewis Hamilton.[2]

Qualifying had seen an upset for the home crowd, as a late lap from Massa saw the #5 Ferrari secure pole position, beating Alonso who had already crossed the line.[2] Their respective teammates Kimi Räikkönen and Lewis Hamilton would share the second row, while Jarno Trulli got his Toyota in between the two BMW Saubers.[2]

Unfortunately for Trulli his race would not go to plan, for the Italian racer would stall his car on the grid and cause the start to be abandoned.[2] He was subsequently dragged off the grid as the field were sent away to complete another formation lap, with the race shortened by a single lap.[2]

At the second attempt the race would get underway, with Alonso drawing alongside Massa into the first corner, only to squeeze the Brazilian and clip the side of the Ferrari.[2] That contact sent the #1 McLaren skating across the gravel, and hence mean he had to scramble back onto the circuit behind Räikkönen, who had been beaten off the line by Hamilton.[2]

Massa was able to use Alonso's off to establish a small lead at the head of the field, with Hamilton having to defend from Räikkönen and Alonso.[2] That was, however, until Räikkönen's Ferrari expired with an engine issue, joining Alexander Wurz, Mark Webber and Trulli on the sidelines.[2]

Scott Speed would have a more spectacular exit as his tyre failed on the start/finish straight, although that would not require a Safety Car despite the fact that bits of Bridgestone were littered across the circuit.[2] As such the race would remain under green flag conditions through to the first round of stops, with Massa still holding a fair lead over Hamilton.[2]

Massa, however, would not have things go entirely his way at the stops, for a few errant drops of fuel would ignite on the back of the Ferrari.[2] Fortunately his mechanics would put out the fire in record time and get the car back out without issue, and with his lead over Hamilton still intact.[2]

The second stint was less eventful, meaning it was down to the second round of stops to cause more excitement.[2] However, the top three would remain stable with Massa still leading comfortably from Hamilton and Alonso, making the midfield the main source of intrigue.[2]

The main battle was between the two Hondas and Giancarlo Fisichella, which came to a conclusion when the two Hondas collided as Jenson Button ventured out of the pits.[2] The result was a broken front wing for the Brit as Rubens Barrichello escaped unharmed, although both would pick up a place as Heidfeld was forced to abandon fourth after a wheel nut had been improperly fastened.[2]

With that the race was over, barring a late relegation down the field for the Renaults duel to a refuelling rig issue.[2] Massa hence won the race at a canter ahead of Hamilton and Alonso, with Robert Kubica, David Coulthard, Nico Rosberg, Heikki Kovalainen and Takuma Sato claiming the remaining points.[2] Sato's score was the first for Super Aguri-Honda since they joined the Championship in 2006.[2]

For the first time since the inaugural season of Formula One World Championship there would be a three-way tie at the head of the field after the opening three rounds, with three drivers on 22 points. Fernando Alonso was technically ahead by virtue of a race win and a second place, while Kimi Räikkönen was second with a win and two thirds. Lewis Hamilton was third man in the trifecta without a win, while Felipe Massa had moved into fourth on seventeen points.

In the Constructors Championship it was McLaren-Mercedes who led the charge, although their lead had been reduced at the head of the hunt. Ferrari were the team to do the damage, moving onto 39 points, while BMW Sauber had lost more ground in third, slipping 21 behind the Scuderia. Renault, Toyota and Williams-Toyota were the only other scorers.

The full entry list for the 2007 Spanish Grand Prix is outlined below:

The full qualifying results for the 2007 Spanish Grand Prix are outlined below:

The full results for the 2007 Spanish Grand Prix are outlined below:

Victory for the second race in succession would move Felipe Massa into third in the Championship leaving Spain, although it was the only driver in the top four who had yet to win who led the charge. Indeed, rookie racer Lewis Hamilton had moved to the top of the Championship with his fourth straight podium finish, registering thirty points and a two point lead. Fernando Alonso had made way for his inexperienced teammate, while Kimi Räikkönen had slipped to fourth ahead of Nick Heidfeld.

McLaren-Mercedes continued to head the charge in the Constructors Championship in Spain, having extended their advantage to nine points over Ferrari in second. The Scuderia were, however, ahead on race wins by three to one, with an already daunting gap back to third placed BMW Sauber. The German-Swiss alliance was, however, in a comfortable third ahead of Renault, as Red Bull-Renault and Super Aguri-Honda added their names to the score sheet.