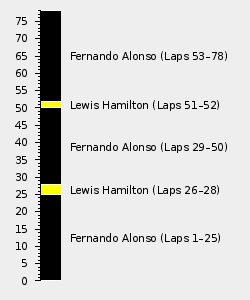 The 2007 Monaco Grand Prix, officially know as the Formula 1 Grand Prix de Monaco 2007, was the fifth round of the 2007 FIA Formula One World Championship staged at Circuit de Monaco in Monte Carlo, Monaco, on 27 May 2007.[1][2] The race would see Fernando Alonso claim the 150th victory for McLaren, albeit after speculation about whether the British squad had used team orders to keep the Spaniard ahead of teammate Lewis Hamilton.[3]

The whole weekend would seemingly go in McLaren-Mercedes favour, with Alonso beating Hamilton to pole position for a front-row lockout.[2] Furthermore, while Felipe Massa would get his Ferrari into third, a heavy accident for Kimi Räikkönen during the second qualifying session left the Finn down in sixteenth, and hence removed one of McLaren's biggest threats.[2]

The start of the race would see Hamilton play the team card almost instantly, sweeping to the inside of the circuit to prevent Massa lunging past.[2] Alonso hence streaked into the lead ahead of the Brit, while Massa kept Giancarlo Fisichella in the Renault at bay to consolidate third.[2]

With that the McLarens were away, easing into a two second lead before the end of a very tame opening lap.[2] Indeed, it would take until the second tour for any real action of note would affect the field, as everyone made it around the opening lap with next to no rubbing, let alone damage.[2]

Vitantonio Liuzzi hence became the source of attention on the second lap, managing to crash his Toro Rosso-Ferrari into the barriers at Massenet while defending from teammate Scott Speed.[2] Remarkably, given the nature of the Monaco circuit, the marshals were able to drag the remains of the Toro Rosso away without the protection of the Safety Car.[2]

As such the race would quickly develop into a procession out front, with Alonso maintaining a one second gap over Hamilton, while both eased away from Massa.[2] Massa himself was able to gap Fisichella, while further down the field the sister Ferrari of Räikkönen found itself stuck behind both Hondas.[2]

With order stabilised it took until the first round of stops for the intrigue in the race to increase, with Alonso losing a lot of time behind backmarkers.[2] Fisichella, meanwhile, would be the first of the leaders to stop, followed in by Massa and Alonso three laps later.[2]

Ferrari used the first stop to gamble, putting Massa onto a fresh set of soft Bridgestones as everyone else opted for hards.[2] This was done in a bid to challenge the McLarens and get him ahead of Hamilton, although the #2 McLaren had enough in hand over the #6 Ferrari to rejoin ahead.[2]

The gamble did not pay off in the slightest, for Massa's pace was no better on the softs and he would drift away from the McLarens.[2] Räikkönen, meanwhile, had fared a little better as running in clear air allowed him to break into the top ten once the shuffle was over, although he had to wait until the second trip to the pits to gain more ground.[2]

Robert Kubica would be the star of the mid-race, the Polish racer running as the fastest man on circuit as one of the few drivers on a one-stop strategy, and even managed to get ahead of fifth placed teammate Nick Heidfeld.[2] Out front, meanwhile, Alonso would make his second and final stop on lap 51, with Hamilton following him in two laps later, as Massa slipped over half a minute behind.[2]

However, any hopes of an inter-McLaren duel for victory would evaporate in the closing stages, as both Alonso and Hamilton backed off as they lapped everyone up to and including fourth placed Fisichella.[2] They duly cruised through to claim one of the most dominant one-twos in recent memory, with Massa over a minute behind in third.[2] Fisichella, Kubica, Heidfeld, Alexander Wurz and Räikkönen were the only other scorers.[2]

After the race McLaren were accused of using team orders to decide the outcome of the race, a charge which carried a penalty of exclusion from the World Championship should they be found guilty.[4] They were, however, cleared of any wrong doing after an FIA investigation and hearing three days later.[4]

Victory for the second race in succession would move Felipe Massa into third in the Championship leaving Spain, although it was the only driver in the top four who had yet to win who led the charge. Indeed, rookie racer Lewis Hamilton had moved to the top of the Championship with his fourth straight podium finish, registering thirty points and a two point lead. Fernando Alonso had made way for his inexperienced teammate, while Kimi Räikkönen had slipped to fourth ahead of Nick Heidfeld.

McLaren-Mercedes continued to head the charge in the Constructors Championship in Spain, having extended their advantage to nine points over Ferrari in second. The Scuderia were, however, ahead on race wins by three to one, with an already daunting gap back to third placed BMW Sauber. The German-Swiss alliance was, however, in a comfortable third ahead of Renault, as Red Bull-Renault and Super Aguri-Honda added their names to the score sheet.

The full entry list for the 2007 Monaco Grand Prix is outlined below:

The full qualifying results for the 2007 Monaco Grand Prix are outlined below:

The full grid for the 2007 Monaco Grand Prix is outlined below:

The full results for the 2007 Monaco Grand Prix are outlined below:

Fernando Alonso moved to the top of the title hunt as a result of the Monaco Grand Prix, moving level with teammate Lewis Hamilton on 38 points. However, while the pair were level on points, it was the Spaniard's two wins to the Brits zero that meant he was ahead, as they estabished a five point margin over third placed Felipe Massa. Kimi Räikkönen and Nick Heidfeld had lost ground in fourth and fifth, while Alexander Wurz had become the season's fourteenth scorer.

In the Constructors Championship McLaren-Mercedes had continued to grow their advantage, their Monaco one-two putting them onto 76 points for the season. Ferrari had therefore lost a fair amount of ground in second, leaving the Principality twenty points behind, while BMW Sauber had slipped 46 points back. Renault and Williams-Toyota completed the top five, with eight teams on the score-sheet.

Retrieved from "https://f1.fandom.com/wiki/2007_Monaco_Grand_Prix?oldid=88153"
Community content is available under CC-BY-SA unless otherwise noted.