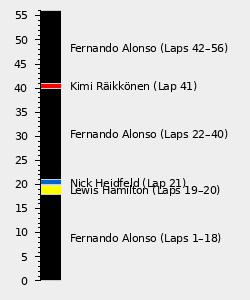 The 2007 Malaysian Grand Prix, otherwise known as the IX Petronas Malaysian Grand Prix, was the second round of the 2007 FIA Formula One World Championship, staged at the Sepang International Circuit in Sepang, Malaysia, on 8 April 2007.[1] The race would see Fernando Alonso lead teammate Lewis Hamilton to a McLaren-Mercedes one-two, defeating the two Ferraris.[1]

Ahead of the race there had been several clarifications by the FIA and race organisers, the most major being a protest by Spyker-Ferrari against Toro Rosso-Ferrari. The former's complaint was that Toro Rosso's 2007 car, the STR2, was essentially the Red Bull RB2 from 2006 with minor upgrades, although this protest was thrown out.

McLaren, meanwhile, would ask for clarification about systems that circumvented flexible floors, after the two Ferraris were noted as showing floor movement at high speed in Australia. This was appeased by the FIA, who mandated several floor mounting designs, which both Ferrari and BMW Sauber complied with before the race.

Into the race weekend and those changes to the floor seemed to have little impact, for Felipe Massa swept to pole position for Ferrari in qualifying, ahead of Alonso's McLaren.[1] Kimi Räikkönen and Hamilton would then share the second row, while Nick Heidfeld and Robert Kubica got their BMW Saubers into fifth and seventh respectively.[1]

The start of the race would see everyone bar Jenson Button, Jarno Trulli and the two Red Bulls start on option tyres, with Massa initially making a good start.[1] However, the Brazilian racer would take a cautious approach into the first corner, and hence allow both Alonso and Hamilton, who had out-dragged Räikkönen, to sweep past.[1]

Later around the lap Adrian Sutil would have a spectacular exit, a suspension failure entering turn four sending the Spyker into the side of Button's Honda.[1] Vitantonio Liuzzi and Takuma Sato came together in the wake of that collision, with everyone bar Button involved in the accidents retiring on the spot.[1]

The early stages saw Alonso establish a small lead, while Massa threw everything he had at Hamilton to try and reclaim second.[1] Hamilton's resistance appeared to have finally broken on lap five, with Massa screaming past the McLaren into the first corner, only to overshoot the corner and slip back down to fifth.[1]

All that fighting allowed Alonso to build a fifteen second lead by the time the first round of stops began, with the Spaniard pitting a lap after Räikkönen.[1] Hamilton made a shorter stop than the rest to get himself back out ahead of Giancarlo Fisichella, who held up Räikkönen, while Massa remained stuck behind Heidfeld's BMW Sauber.[1]

With less fuel than his teammate there was little surprise that Hamilton was able to close the gap to Alonso and drop Räikkönen, recording several fastest laps during the second stint.[1] However the trade off was the fact that he had to stop earlier than the rest, take on more fuel, and use his third set of tyres for longer.[1]

Yet, the order at the head of the field remained the same once the second round of stops was completed, although Alonso had increased his lead and Räikkönen had regained some ground on Hamilton.[1] He duly spent the rest of the race closing in on the rookie's McLaren, moving into striking position with a handful of laps to go.[1]

Hamilton's resistance was not to be broken, however, and so the Brit would hang on to secure second behind teammate Alonso, who held a comfortable lead to the flag.[1] Räikkönen hence had to settle for third, less than a second behind the #2 McLaren, while Heidfeld was a distant fourth ahead of Massa.[1] Fisichella, Trulli and Heikki Kovalainen claimed the remaining points.[1]

It was Kimi Räikkönen who had opened the season with victory and the lead in the Championship, leaving Australia with ten points to his credit. Defending Champion Fernando Alonso began his title defence in second, with new teammate Lewis Hamilton and impressive third after his debut. Nick Heidfeld and Giancarlo Fisichella completed the opening day top five, with Felipe Massa, Nico Rosberg and Ralf Schumacher also on the board.

In the Constructors Championship it was McLaren-Mercedes who led the way, a point ahead of Ferrari in second after the opening race. An eight point gap followed before BMW Sauber appeared in third, with Renault, Williams-Toyota and the factory Toyota completing the scorers.

The full entry list for the 2007 Malaysian Grand Prix is outlined below:

The full qualifying results for the 2007 Malaysian Grand Prix are outlined below:

The full results for the 2007 Malaysian Grand Prix are outlined below:

Victory, combined with second place on the opening day, meant it was reigning Champion Fernando Alonso who led the title hunt after the Malaysian Grand Prix, holding eighteen points to his name. Kimi Räikkönen had been forced to make way for him, a first and a third in the opening races leaving him two behind on sixteen, while Lewis Hamilton had retained third on fourteen. Nick Heidfeld, Giancarlo Fisichella and Felipe Massa had likewise held station behind, as Jarno Trulli and Heikki Kovalainen had added their names to the scoresheet.

In the Constructors Championship it was status quo at the head of the pack, as McLaren-Mercedes had opened out a nine point lead in Malaysia. Ferrari retained their spot in second as the Anglo-German alliance's closest challengers, before a thirteen point gap back to BMW Sauber in third. Renault and Toyota completed the early top five, the latter having overhauled customers Williams-Toyota in Sepang.