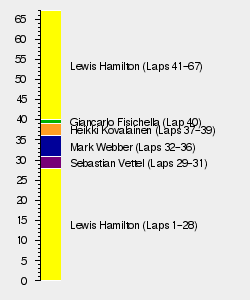 The 2007 Japanese Grand Prix, formally known as the XXXIII Fuji Television Japanese Grand Prix (XXXIII フジテレビ日本グランプリ in Japanese) was the fifteenth round of the 2007 FIA Formula One World Championship, staged at the Fuji Speedway in Shizuoka Prefecture, Japan.[1][2] The race, which was the first Grands Prix to be held at the Toyota owned facility since 1977, would see Lewis Hamilton claim victory for McLaren-Mercedes.[2]

Qualifying had been staged on a soaked but drying circuit, and would see Hamilton edge out teammate and rival Fernando Alonso for pole position by 0.070s.[2] Fellow title protagonists Kimi Räikkönen and Felipe Massa would share the second row for Ferrari, while Nico Rosberg was the best placed Toyota engined driver in sixth.[2]

The rain returned with a vengeance on raceday, with the race having to be started behind the Safety Car if it was going to start at all.[2] Indeed, there was so much water on track that everyone bar the Ferraris would start on extreme wet Bridgestone tyres, the Scuderia having gambled that the rain would ease off early on.[2]

That gamble backfired spectacularly, as both Räikkönen and Massa had to pit for extremes, with Räikkönen even spinning while catching the field, while Massa stopped a second time.[2] Vitantonio Liuzzi, meanwhile, would lose a lap after an issue on the grid put him in the pitlane, resulting in him being given permission to unlap himself by the FIA as a means of testing the conditions.[2]

Ultimately, Bernd Mayländer would remain out on track until the end of lap nineteen, finally releasing the field to finally race in earnest.[2] Hamilton duly eased away from teammate Alonso as the field slithered into the first corner, while Sebastian Vettel danced his way past Nick Heidfeld for third.[2]

Heidfeld was left to collide with a lunging Jenson Button a few moments later, allowing Mark Webber to slot into fourth despite the fact that he was battling food poisoning.[2] Massa, meanwhile, would find himself whacking a spinning Alexander Wurz at the back of the field, although the Brazilian was able to continue.[2]

The race soon settled down with Alonso chasing Hamilton but unable to match the Brit's pace through to the first round of stops.[2] The Spaniard was the first to stop with McLaren switching him to a one-stop strategy, although that would dump him back down to seventh behind a battling quartet of Giancarlo Fisichella, Heikki Kovalainen, Robert Kubica and David Coulthard.[2]

Hamilton pitted on the following tour and managed to get out of the pits ahead of the group, briefly handing the lead to Vettel, who became the youngest ever driver to lead a race aged 20 years, 89 days).[2] Alonso's bid for victory was ended with that one-stopping queue ahead, with the #1 McLaren soon falling behind Heidfeld and Vettel after the German rookie's stop.[2]

Moments later and Alonso's race was over, the McLaren spinning into the barriers to bring out the Safety Car.[2] This allowed those yet to stop to dive into the pits once the pits opened, although not before Kubica had given Hamilton a scare with a penalty earning whack for the lead.[2]

In the midst of the SC Webber, running in second, would be removed from the race by Vettel, who smashed into the back of the Red Bull-Renault having been blinded by the spray.[2] Once their debris was cleared the race resumed, with the race quickly sprinting past the crucial 75% distance mark that meant that those that finished could earn full points.[2]

Late changes to the field saw Räikkönen charge through to third to complete the podium behind Kovalainen, as Hamilton swept across the line to secure victory.[2] Fourth went to Coulthard ahead of Fisichella, Massa rose as high as third before making a fourth trip to the pits late on and hence finished fifth, while Kubica and Adrian Sutil secured the remaining points.[2]

The results of the race meant that Hamilton established a twelve point lead over Alonso with two races to go, while Räikkönen would slip seventeen off the lead. Elsewhere, Sutil secured his and Spyker-Ferrari's maiden points finish, while Kovalainen picked up his maiden podium finish.

Victory for Kimi Räikkönen moved the Finn back into title contention leaving Belgium, although Räikkönen still faced a thirteen point deficit with three races to go. That made him the "dark horse" for the title, as Lewis Hamilton continued to lead the charge ahead of his teammate Fernando Alonso. The Spaniard had, however, managed to close the Brit's advantage to just two points as the European season came to an end, with fourth placed Felipe Massa set to fall out of the fight if he failed to outscore Hamilton in Fuji.

With McLaren-Mercedes having been excluded Ferrari had a clean shot at claiming the Constructors Championship in Spa, and they duly took it, a one-two leaving them on 161 points. BMW Sauber hence had to settle for second in the Championship with three rounds to go, leaving most of the intrigue in the fight for third. That was to be contest by Renault and Williams-Toyota, with Red Bull-Renault and Toyota realistically too far back to challenge.

The full entry list for the 2007 Japanese Grand Prix is outlined below:

The full qualifying results for the 2007 Japanese Grand Prix are outlined below:

The full results for the 2007 Japanese Grand Prix are outlined below:

Victory for Lewis Hamilton moved the Brit a significant twelve points clear in the Championship hunt leaving Japan, meaning he could potentially claim the title in China. Indeed, should the Brit outscore Fernando Alonso and Kimi Räikkönen in Shanghai, then Hamilton would become the first rookie to win the F1 Championship since the inaugural 1950 Championship. However, it was still a three-horse race for the crown, with Alonso having the experience of winning two World Championships, while Räikkönen was the dark horse in third.

In the Constructors Championship Ferrari had enhanced their title winning advantage, leaving Fuji with 78 points in hand over second placed BMW Sauber. The excluded McLaren-Mercedes would have been a clear first on 202 points had they not been thrown out of the Championship, and so could have claimed the crown in China. Elsewhere, Renault had all but secured third ahead of Williams-Toyota, leaving them to fend off Red Bull-Renault and Toyota in a fight for fourth.