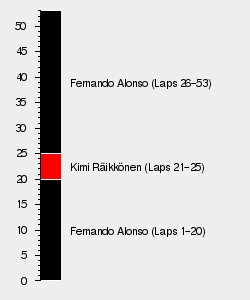 The 2007 Italian Grand Prix, officially the LXXVII Gran Premio Santander d'Italia was the thirteenth race of the 2007 FIA Formula One World Championship, which took place at the Autodromo Nazionale Monza in Monza, Italy, on 9 September 2007.[1][2] The race would see Fernando Alonso claim his final victory for McLaren-Mercedes ahead of teammate and rival Lewis Hamilton, closing the gap between them in the Championship to just three points.[2]

With a recent run of form for Ferrari the loyal tifosi expected to see the Scuderia dominate on home soil, and were therefore left disappointed when Alonso claimed pole position during qualifying.[2] Hamilton made it a McLaren-Mercedes front-row lock out ahead of Ferrari's Felipe Massa, while the Brazilian's teammate Kimi Räikkönen could only muster fifth behind Nick Heidfeld.[2]

The start of the race saw the top three dive into the Rettifilo in grid order, with Alonso fending off the attentions of Hamilton and Massa.[2] Behind, Räikkönen managed to slip past Heidfeld for fourth, while David Coulthard made ground in the midfield congestion, leaping up to fifteenth from twentieth.[2]

The rest of the opening lap passed without issue, and looked set to be a flatout affair until Coulthard flew off the circuit at Curva Grande on lap two, bringing out the Safety Car.[2] The cause of his accident was later attributed to damage sustained at the first chicane, with the Scot climbing out of his ruined Red Bull-Renault unaided.[2]

The race resumed on lap seven, with Alonso easing away from Hamilton to leave the Brit to fend off the two Ferraris.[2] Indeed, Hamilton would have to place his car carefully to keep an aggressive Massa at bay, until the #5 Ferrari suddenly dived into the pits on lap nine, a sign that all was not well with the Brazilian's car.[2]

A lap later and Massa was out for good, suspension damage ending his race and potentially his bid for the Championship.[2] Räikkönen was hence left as the lone Ferrari against the two McLarens, but the Finn could muster no response to either of the silver machines.[2]

Yet, the tifosi's hopes were given a boost on lap nineteen, as Hamilton picked up a puncture towards the end of the lap, and had to make his first stop early.[2] That dumped the Championship leader back down to sixth as the rest of the field made their stops, although with fresh tyres and clear air Hamilton was able to match Räikkönen's times up ahead.[2]

Indeed, despite leading the race for four laps between Alonso's stop and his own, Räikkönen would be pounced upon by Hamilton when he emerged from the pits, the Brit scything past the Ferrari to reclaim second.[2] The only time Räikkönen headed a McLaren again would be during the second round of stops, although that time around Alonso would be able to rejoin without losing the lead, while Räikkönen only ran two laps longer than Hamilton.[2]

With that a rather tame Italian Grand Prix was over, with Alonso leading Hamilton across the line to a dominant one-two for McLaren, with Räikkönen completing the podium in a distant third.[2] Nick Heidfeld and Robert Kubica were next ahead of Nico Rosberg, while Heikki Kovalainen and Jenson Button secured the remaining points.[2]

Once the race was over attention would focus on an FIA Hearing to be held on 13 September, which would make a ruling on the McLaren/Ferrari "Spygate" allegations which had been rumbling in the F1 paddock since the 2007 United States Grand Prix.[3] The FIA had previously dismissed the case after a hearing on 26 July 2007, which found that McLaren had used Ferrari's technical secrets, but lacked the evidence to enact a punishment.[4] The FIA had subsequently obtained new information and recalled the case, after an appeal from Ferrari regarding the original hearing.[3]

Felipe Massa secured his third victory of the campaign, meaning the entire top four in the Championship had three wins apiece with five races to go. However, while the Brazilian had moved back ahead of his teammate Kimi Räikkönen in Turkey, he still trailed Championship leader Lewis Hamilton by fifteen points. Indeed, the Brit had just managed to retain his lead at the head of the pack, with Fernando Alonso closing to within five of the rookie.

In the Constructors Championship it was still McLaren-Mercedes who led the charge, although a maximum score for Ferrari had seriously damaged their advantage. Indeed, the Scuderia would sit just eleven points behind the Anglo-German alliance heading to Italy, with a one-two on home soil potentially enough to put them ahead. Elsewhere, BMW Sauber once again reinforced their third place status ahead of Renault, with no changes to the rest of the contenders.

The full entry list for the 2007 Italian Grand Prix is outlined below:

The full qualifying results for the 2007 Italian Grand Prix are outlined below:

The full results for the 2007 Italian Grand Prix are outlined below:

Fernando Alonso would inch closer to Lewis Hamilton at the top of the Championship hunt with victory in Italy, the Spanish racer closing the gap to just three points with four rounds to go. They had both increased their advantage over third placed Kimi Räikkönen, who had slipped fifteen behind Alonso, while Felipe Massa was on the verge of dropping out of the hunt altogether in fourth, having fallen 23 behind. Elsewhere, Nick Heidfeld was still mathematically in the hunt in fifth, but effectively needed to win all four of the remaining races, and see Hamilton fail to score.

In the Constructors Championship it was McLaren-Mercedes who continued to lead the way, and had extended their advantage to 23 points over Ferrari. Furthermore, with third placed BMW Sauber falling 80 points behind and out of mathematical range, there was a real threat that the FIA Hearing scheduled for 13 September could decide the Constructors Championship if McLaren were thrown out of the Championship. The Swiss-German alliance would therefore remain in the hunt, but would still have to overcome a 57 point deficit.