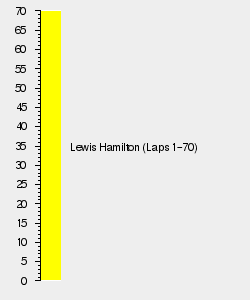 The 2007 Hungarian Grand Prix, formally known as the XXIII Agip Magyar Nagydíj was the eleventh round of the 2007 FIA Formula One World Championship, held at the Hungaroring near Budapest, Hungary, on 5 August 2007.[1][2] The race was won by McLaren-Mercedes' driver Lewis Hamilton, although it was the antics of himself and his teammate Fernando Alonso during qualifying that grabbed the headlines.[2]

Indeed, with the relationship having deteriorated throughout the season the McLaren civil war came to a head in Q3 at Hungary, with Hamilton delivering the first blow, ignoring a team order to let Alonso past.[3] Alonso overtook him on their cool down lap and then ignored a signal to leave the pitbox with Hamilton behind him as they stopped for a new set of tyres, causing Hamilton to missout on a final flying lap.[3]

The ploy appeared to have worked for Alonso, for the Spanish ace secured pole position ahead of Hamilton by a tenth of a second.[2] Nick Heidfeld and Kimi Räikkönen would share the second row, while Felipe Massa was a disappointed with fourteenth.[2]

Nine hours after qualifying, however, the FIA would complete their investigation into Alonso's antics, and duly slapped the Spaniard with a five place grid penalty.[2] Furthermore, McLaren would not be able to score Constructors Championship points as a result of their drive rebellion, and would not receive a winner's trophy.[2]

With Hamilton on pole the race got underway, with the Brit easing off the grid to claim an early lead from Räikkönen, who surged past Heidfeld for second.[2] Alonso, meanwhile, would fail to make progress from sixth, and after a lunge at Nico Rosberg was thwarted the #1 McLaren slipped behind Robert Kubica.[2]

Alonso would also slip behind Mark Webber before the end of the opening lap, before setting about climbing back up the field, with early lunges past the Australian and Kubica left him trailing Ralf Schumacher.[2] Up front, meanwhile, Hamilton was doing his best to escape Räikkönen, with the gap settling down at around four seconds.[2]

Indeed, the race would become a procession from that moment on, with the only major on-track incident coming when Sakon Yamamoto smashed into the barriers in his Spyker-Ferrari.[2] As such it was only when the first round of stops began that the order was shuffled, with Heidfeld, Rosberg and Alonso the first to dive in on lap eighteen.[2]

The majority of the field were running on three-stop schedules, although McLaren opted to put Alonso onto a two-stop with a heavy fuel load.[2] They would also switch Hamilton to a two-stop as a result of the Brit's healthy margin over third placed Heidfeld, with Räikkönen also switched to a two by Ferrari.[2]

The second stint for the leaders would see Räikkönen close the gap to Hamilton, while Alonso was throwing everything he had at Schumacher in a bid to pass the Toyota.[2] Yet, the Spaniard would have to wait until the German veteran made his second stop, allowing the #1 McLaren to finally run in clear air.[2]

Running long in the middle stint would allow Alonso to jump Schumacher, and when Rosberg and Kubica made their third stops the #1 McLaren was up to fourth.[2] He duly began carving into Heidfeld's grip on third, as Hamilton managed to gain time on Räikkönen by running longer in their second stint.[2]

With that the race was run, with Hamilton fending off a late charge from Räikkönen to claim victory, the McLaren having been hampered by a steering issue in the second half of the race.[2] Heidfeld duly completed the podium as Alonso ran out of time to catch the BMW Sauber, with Kubica trailing him in the sister car.[2] Schumacher, Rosberg and Heikki Kovalainen secured the remaining points.[2]

Victory for Fernando Alonso had sent the Spanish ace streaking to the top of the Championship hunt in Germany, demolishing Lewis Hamilton's lead to just two points. Indeed, the Brit's first failure to score looked to have been a costly one, with Felipe Massa having also closed to within eleven of the rookie. Kimi Räikkönen, meanwhile, had effectively lost ground having also failed to score, with Nick Heidfeld a distant fifth.

In the Constructors Championship it had been a marginally better afternoon for McLaren-Mercedes, as they extended their lead by two points as they moved onto 138 for the campaign. Ferrari retained their spot in second, moving onto 111, and hence opened out a 50 point gap to third placed BMW Sauber. Elsewhere, Red Bull-Renault had been the biggest winners at the Nürburgring, moving up to fifth ahead of Toyota.

The full entry list for the 2007 Hungarian Grand Prix is outlined below:

The full qualifying results for the 2007 Hungarian Grand Prix are outlined below:

The full results for the 2007 Hungarian Grand Prix are outlined below:

Victory for Lewis Hamilton moved the British rookie seven points clear atop the Championship leaving Hungary, and left him with 80 points to his name. Fernando Alonso had hence lost ground in second, while Kimi Räikkönen had closed the gap to the Spaniard in third, having also overtaken his teammate Felipe Massa. Massa was, however, just a point behind the Finn leaving the Hungaroring, while Nick Heidfeld had maintained his top five status.

In the Constructors Championship Ferrari had been unable to do the damage they needed with McLaren-Mercedes banned from scoring in Hungary, having only closed the gap by eight points. The Anglo-German alliance hence held a twelve point advantage leaving the Hungarian Grand Prix, and had a healthy advantage over third placed BMW Sauber. The German-Swiss alliance was, however, in a very secure third place, with Renault having been unable to close the gap to them once again in Hungary.