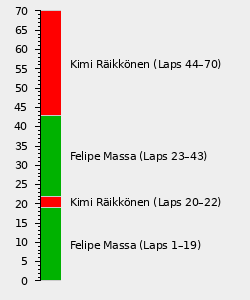 The 2007 French Grand Prix, otherwise known as the XCIII Grand Prix de France, was the eighth round of the 2007 FIA Formula One World Championship, staged at the Circuit de Nevers Magny-Cours in Magny-Cours, France, on 1 July 2007.[1][2] The race would see Kimi Räikkönen secure his second victory of the season for Ferrari, having jumped teammate Felipe Massa late on.[2]

After being trounced by the two McLaren-Mercedes in the two North American races, Ferrari put on a strong show in qualifying, with Massa claiming pole position while Räikkönen secured third.[2] They were, however, split by Lewis Hamilton in the #2 McLaren, while Fernando Alonso had been unable to compete in Q3 after a gearbox failure.[2]

Race morning would arrive with some tragic news, as a helicopter crash at the Magny-Cours circuit had seen three people die, including PR man Emmanuel Longobardi, pilot Pierre Bennehard and a New Zealander named Simon McGill.[3] A Bridgestone worker and his niece escaped with injuries, although there were no plans to postpone or cancel the race.[2]

After a minute's silence on the grid the field were released for the start, with Massa acing his getaway to claim an early lead.[2] Behind, Räikkönen would get the jump on Hamilton to secure second, while Anthony Davidson hit a cautious Vitantonio Liuzzi, in a collision that saw the Toro Rosso-Ferrari swing back into the side of the Super Aguri-Honda.[2]

Further incidents on the opening lap saw Jarno Trulli take himself out by slamming into the back of Heikki Kovalainen at Adelaide, gifting Alonso two places.[2] Out front, meanwhile, Massa would eek out a lead ahead of Räikkönen, while Hamilton quickly pulled clear of a returning Robert Kubica in the #10 BMW Sauber.[2]

Indeed, Kubica would form something of a bottle neck during the opening stages of the race, with the top three all escaping up the road.[2] That hence allowed Alonso to pick his way past Nico Rosberg in Kubica's drawn out train, although the Spaniard would find Nick Heidfeld putting up a very stubborn defence.[2]

Heidfeld's resistance would last through to the pit window, with Hamilton the first of the leaders to stop on lap sixteen.[2] Worryingly for McLaren's hopes the two Ferraris would continue to circulate for several laps, with Massa coming in on lap nineteen, and Räikkönen lasting until lap 21.[2]

That effectively ended Hamilton's bid for victory, for the two Ferraris were able to ease clear during the second stint, with Räikkönen also drawing in Massa.[2] Their fight would, however, be decided in the pitlane, as Alonso provided most of the on-track action by passing Heidfeld and Giancarlo Fisichella, only to slip back behind them after making an early second stop.[2]

Massa was the first of the leaders to pit on lap 43, joined in the pitlane by Hamilton, with Räikkönen inheriting the lead.[2] Two quick laps later and the Finn was in, and would subsequently sprint out of the pits ahead of Massa to secure the race lead.[2]

With the race was over, with Räikkönen eking out a two second lead during the closing stages to claim his second win of the season.[2] Hamilton finished a distant third to complete the podium, while Kubica claimed a lonely fourth.[2] Heidfeld and Fisichella were next ahead of Alonso, while Jenson Button claimed a rare point for the desperately poor Honda squad in eighth.[2]

The full entry list for the 2007 French Grand Prix is outlined below:

The full qualifying results for the 2007 French Grand Prix are outlined below:

The full results for the 2007 French Grand Prix are outlined below:

Victory for Kimi Räikkönen moved the Finn closer to the fight for second, with both himself and teammate Felipe Massa closing in on Fernando Alonso. Out front, meanwhile, an eighth consecutive podium finish had allowed rookie racer Lewis Hamilton to extend his Championship lead, the Brit leaving France on 64 points, and with fourteen points in hand over his teammate. Elsewhere, Nick Heidfeld had consolidated fifth ahead of Robert Kubica, as Jenson Button added his name to the score sheet.