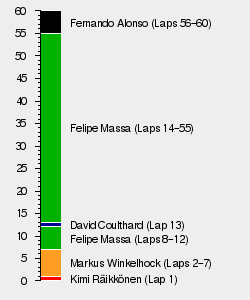 The 2007 European Grand Prix, formally known as the 2007 Formula 1 Grand Prix of Europe, was the tenth race of the 2007 FIA Formula One World Championship, held on 22 July 2007 at the Nürburgring in Nürburg, Germany.[1][2] The race would be won by Fernando Alonso amid changing conditions, although it was more notable for the exploits of one-time starter Markus Winkelhock.[2]

Winkelhock, the son of former F1 racer Manfred Winkelhock, got his F1 debut after being called up by Spyker-Ferrari, who had decided to drop Christijan Albers.[3] The cause of Albers' absence was due to a lack of payment from his sponsors, with his future in F1 in serious doubt as Spyker were actively seeking a replacement driver.[3]

Qualifying would see Winkelhock lap a second and a half off his teammate Adrian Sutil at the back of the field, a fact which proved significant on race day.[2] At the head of the field, meanwhile, the familiar Ferrari/McLaren-Mercedes duel for pole position was concluded in the Scuderia's favour, as Kimi Räikkönen beat Alonso to the top spot on the grid.[2]

Heavy rain greeted the field as they were released to start the formation lap, with everyone starting on slick Bridgestone tyres.[2] Seeing this, Spyker decided to call Winkelhock in at the end of the formation lap to stick him on wet tyres, a worthwhile gamble given that he was starting at the back regardless.[2]

The start itself was fairly even at the front, with Räikkönen easing ahead while Felipe Massa beat Alonso into the first corner.[2] Behind, Championship leader Lewis Hamilton charged up to sixth off the grid, having qualified in tenth after a heavy accident in qualifying, but would get caught in a collision with the two BMW Saubers and picked up a puncture.[2]

The opening lap proved chaotic, with many drivers slithering off circuit and hence prompted most of the field to dive in for intermediate tyres.[2] The rest, bar Räikkönen who had slid wide trying to enter the pits on lap one, would stay out in hopes that the rain would clear, leaving Winkelhock with a fair lead in the #21 Spyker.[2]

The German debutante's lead would only grow, however, for the rain continued to pound the circuit and make it necessary for everyone bar Winkelhock to stop for full wets.[2] However, an en-masse slide into the gravel at turn one would bring the race to a halt on lap four with a red flag, although only Hamilton was put back on track, a controversial decision.[2]

The race restarted once the rain had cleared behind the Safety Car, with the order restored to how it had stood at the end of lap three.[2] It was further agreed that those who were a lap down would be allowed to overtake the SC train, a major benefit to Hamilton who had lost a lap while beached at turn one.[2]

The Brit duly unlapped himself and then stopped for slicks, although this gamble backfired when he slid off the circuit while trying the catch the SC train.[2] Winkelhock, meanwhile, would do his best to hold the lead, but the Spyker simply lacked the pace to keep the rest of the field at bay, being the only car still on full wets.[2]

With that the race became a duel between Massa and Alonso, with Räikkönen out of serious contention after his pit-in issues.[2] Their fight would continue through to the point when the circuit finally dried out, with the field switching to drys with twenty laps to go.[2]

It would take a robust move from Alonso to settle the fight, with the Spaniard barging his way around the outside of Massa through turn five to claim the lead, before escaping up the road to claim victory.[2] Massa was irate at the Spaniard's move but settled for second, while Mark Webber completed the podium for Red Bull-Renault.[2] Alexander Wurz, David Coulthard, Nick Heidfeld, Robert Kubica and Heikki Kovalainen completed the scorers.[2]

Star of the European Grand Prix Winkelhock retired with a hydraulics failure on lap thirteen, while Hamilton failed to score points, or a podium finish, for the first time in his F1 career. The race was also set to be named the 2007 German Grand Prix, but a naming rights dispute with the Hockenheimring resulted in the race being labelled as the European Grand Prix.[2]

The full entry list for the 2007 European Grand Prix is outlined below:

The full qualifying results for the 2007 European Grand Prix are outlined below:

The full results for the 2007 European Grand Prix are outlined below:

Victory for Fernando Alonso had sent the Spanish ace streaking to the top of the Championship hunt in Germany, demolishing Lewis Hamilton's lead to just two points. Indeed, the Brit's first failure to score looked to have been a costly one, with Felipe Massa having also closed to within eleven of the rookie. Kimi Räikkönen, meanwhile, had effectively lost ground having also failed to score, with Nick Heidfeld a distant fifth.

In the Constructors Championship it had been a marginally better afternoon for McLaren-Mercedes, as they extended their lead by two points as they moved onto 138 for the campaign. Ferrari retained their spot in second, moving onto 111, and hence opened out a 50 point gap to third placed BMW Sauber. Elsewhere, Red Bull-Renault had been the biggest winners at the Nürburgring, moving up to fifth ahead of Toyota.