Formula 1 Wiki
Register
Don't have an account?
Sign In
Advertisement
in: 2007 Grands Prix, British Grand Prix, Formula One races in the United Kingdom 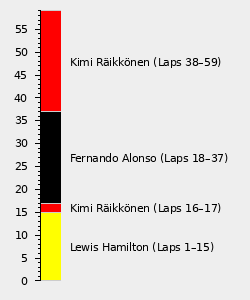 The 2007 British Grand Prix, otherwise known as the 2007 Formula 1 Santander British Grand Prix, was the ninth round of the 2007 FIA Formula One World Championship, staged at the Silverstone Circuit in Northamptonshire, UK, on 8 July 2007.[1][2] The race would see Kimi Räikkönen defeat the two McLaren-Mercedes, as events off circuit overshadowed the weekend.[2]

Ahead of the race it had emerged that Ferrari had opened legal proceedings against Nigel Stepney, an engineer working for the Scuderia, and a then-unidentified McLaren employee.[3] The Italian team had already gained a search warrant amid allegations of theft of technical secrets, with McLaren having held an internal investigation that found no use of Ferrari technical secrets.[3] Regardless, the FIA would launch their own investigation, which would look specifically at F1 related technical data from both teams.[4]

Fortunately there would be no impact on the race weekend itself, as Lewis Hamilton swept to pole position during qualifying for McLaren.[2] Räikkönen was the Brit's closest challenger in second for Ferrari, while their teammates Fernando Alonso and Felipe Massa shared the second row.[2]

The start of the race saw Hamilton defend his hard fought pole aggressively into Copse, sweeping to the inside of the circuit to block the oncoming Räikkönen.[2] The Finn therefore had to settle for second with Alonso moving into third, as Massa had stalled on the grid and caused the first attempted start to be abandoned.[2]

Indeed, Massa would be the centre of attention during the early stages as Hamilton, Räikkönen and Alonso broke clear at the head of the field.[2] The Brazilian racer duly charged through the field, overtaking three cars a lap to move into the top ten by the start of lap five.[2]

With that the race settled down, with Hamilton initially able to build a two second lead, only for Räikkönen to reel him in again as the first round of pitstops approached.[2] The Finn's pace advantage towards the end of the stint was such that he even attacked the Brit into Brooklands, although Hamilton managed to place his McLaren perfectly to block the Ferrari.[2]

Hamilton swept into the pits a couple of laps later, only to make arguably his first mistake of the season, jumping the lollipop while his car was being refuelled.[2] While the #2 McLaren had only moved a couple of feet the damage to his lead was done, for Räikkönen delivered a fastest lap and then made a perfect stop to jump the McLaren.[2]

Alonso inherited the lead until lap twenty, and with a short-fuel stop was able to jump both Räikkönen and Hamilton to claim the lead.[2] The Spaniard quickly set about building a lead over the Finn and his teammate, but a constant stream of traffic meant that he was unable to escape too far up ahead.[2]

Indeed, Alonso was lucky to avoid a more serious incident during the lappery, as moments after he lapped Scott Speed the American racer was taken out of the race by a lunging Alexander Wurz at Vale.[2] Alonso would stay out for a handful more laps before he dived in for his early second stop, handing the lead back to Räikkönen.[2]

When the Finn stopped six laps later the race was over, for the Finn swept out of the pits with a healthy lead over the Spaniard, while Hamilton had slumped to a lonely third.[2] That left the remaining interest in the race on Massa, who had fought his way past the Renaults and Nick Heidfeld, and hence was left to hunt Robert Kubica in the closing stages for fourth.[2]

Yet, there were no late changes to the order, as Räikkönen cruised through the final laps to secure his third win of the campaign ahead of Alonso.[2] Hamilton was a frustrated third ahead of Kubica and Massa, with Heidfeld trailing those two, while Heikki Kovalainen beat teammate Giancarlo Fisichella to seventh.[2]

Victory for Kimi Räikkönen had moved the Finn closer to the fight for second in France, with both himself and teammate Felipe Massa having closed in on Fernando Alonso. Out front, meanwhile, an eighth consecutive podium finish had allowed rookie racer Lewis Hamilton to extend his Championship lead, the Brit leaving France on 64 points, and with fourteen points in hand over his teammate. Elsewhere, Nick Heidfeld had consolidated fifth ahead of Robert Kubica, as Jenson Button added his name to the score sheet.

The full entry list for the 2007 British Grand Prix is outlined below:

The full qualifying results for the 2007 British Grand Prix are outlined below:

The full results for the 2007 British Grand Prix are outlined below: