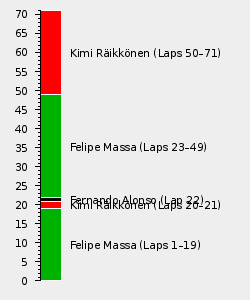 The 2007 Brazilian Grand Prix, officially the XXXVI Grande Prêmio do Brasil was the seventeenth and final race of the 2007 FIA Formula One World Championship, which took place at the Autódromo José Carlos Pace in São Paulo, Brazil, on 21 October 2007.[1][2] The race would see Lewis Hamilton, Fernando Alonso and Kimi Räikkönen fight for the title at the final race of the season, with just a point separating at the end of the race.[2]

Hamilton had led the Championship battle arriving in São Paulo, the Brit leading McLaren-Mercedes teammate and defending Champion Alonso by four points.[2] The third man in the hunt, Ferrari's Räikkönen, would have to overcome a seven point deficit to claim a maiden crown, and was viewed by many as the dark horse for the title.[2]

However, all of the title protagonists would be beaten to pole position in qualifying, as Felipe Massa secure the top slot on the grid in front of his home fans.[2] Hamilton duly claimed second ahead of Räikkönen with Alonso in fourth, while Mark Webber shared the third row with Nick Heidfeld.[2]

The start of the race would see Räikkönen strike the first blow, the #6 Ferrari sprinting ahead of Hamilton to slot into second behind the sister car of Massa.[2] Alonso then slithered inside the #2 McLaren to secure third, through Curve del Sol, before defending heavily into Reta Oposta from his teammate.[2]

Hamilton took the bait and attacked, only to lock-up having moved to the outside of the circuit and ran wide.[2] He subsequently dropped to eighth behind Webber, Heidfeld, Robert Kubica and Jarno Trulli, while Vitantonio Liuzzi lost his front wing as the midfield made room for the returning McLaren.[2]

With Hamilton already having to make a comeback the two Ferraris broke away from Alonso, with Massa leading Räikkönen much to the delight of the home fans.[2] Hamilton, meanwhile, would make early moves on Trulli and Heidfeld to move into sixth, before his first ever mechanical gremlin struck, leaving the Brit stuck in neutral and sliding down the order.[2]

Thirty tense seconds later and Hamilton finally got going again, although he had slumped to the back of the field in eighteenth.[2] Yet, the Brit quickly managed to get back up to speed, and by lap fifteen the #2 McLaren was up to eleventh with a move on Rubens Barrichello.[2]

The first rounds of stops opened on lap twenty, with Massa leading the charge into the pits for those on two-stops.[2] Räikkönen was in two laps later along with Alonso, Trulli, Sebastian Vettel and Hamilton, with Hamilton short-fuelling to try an ambitious three-stop, knowing that, as things stood, he would need fifth place to secure the title.[2]

Hamilton again had to battle back into the top ten, only to be dumped back out again when he made his early second stop on lap 37.[2] Up front, meanwhile, Massa would make an error at Descida do Lago prior to his stop, opening the door for Räikkönen to challenge for the lead, having trailed the Brazilian by three seconds throughout the second stint.[2]

Ultimately the pass for the lead was made in the pitlane, with Räikkönen staying out three laps longer than the Brazilian and setting a succession of fastest laps to jump ahead.[2] By this stage Kubica was in third ahead of Alonso, but yet to stop, while Hamilton was up to eighth, although that became ninth after he completed his third and final stop on lap 57.[2]

The final stages of the race were tense, with Hamilton first moving past David Coulthard and then Trulli, although he trailed the three-way battle for fourth by some margin.[2] Indeed, his only hope of getting into fifth would require Rosberg, Heidfeld and Kubica to trip over one-another, although when Rosberg's lunge carried himself and Heidfeld off a turn one, only Kubica was able to benefit.[2]

With that the race was over, with Räikkönen and Massa lapping Hamilton en-route to securing a dominant one-two for Ferrari.[2] Alonso completed the podium a distant third and hence slipped behind Räikkönen by a point, while Kubica, Rosberg and Heidfeld crossed the line a few moments later.[2] Hamilton hence came across the line in seventh and lost the Championship by a point, and ergo left Räikkönen as Champion on 110 points to Alonso and Hamilton's 109.[2]

One potential twist was investigated after the race however, after the scrutineers initially questioned the fuel used in the BMW Sauber and Williams-Toyota cars.[3] This was ultimately thrown out by the officials after an investigation, although McLaren appealed, gaining a hearing on 16 November 2007.[3] However, the FIA rejected their appeal and reaffirmed the provisional results.[3]

With Lewis Hamilton failing to finish for the first time in his fledgling career the title fight would go down to the season finale in Brazil, with three main protagonists in contention. Hamilton continued to lead the charge, with a four point advantage over Fernando Alonso, with the Spaniard needing to finish fourth or higher with Hamilton failing to score. The third man, and dark horse in the fight, was China racer winner Kimi Räikkönen, who would have to finish second or first in China, and see Hamilton finish sixth or lower.

In the Constructors Championship Ferrari had added to their title winning tally once again, leaving China on 186 points at the head of the field. BMW Sauber headed to the finale having already secured second, and were just six shy of the 100 point mark, while Renault had claimed third with a round to spare on 51. Elsewhere, Toro Rosso-Ferrari had picked up their first points of the campaign, moving them up to seventh from the foot of the table.

The full entry list for the 2007 Brazilian Grand Prix is outlined below:

The full qualifying results for the 2007 Brazilian Grand Prix are outlined below:

The full results for the 2007 Brazilian Grand Prix are outlined below:

A sixth win of the campaign left Kimi Räikkönen atop the 2007 FIA Formula One World Championship standings at the final round, the Finn claiming his maiden World Championship with 110 points. Lewis Hamilton hence slipped to second having headed the Championship since the Spanish Grand Prix, missing out on a rookie Championship title by a single point. Fernando Alonso then completed the top three, level on points with Hamilton but behind on countback, while Felipe Massa and Nick Heidfeld completing the top five.

In the Constructors Championship it appeared, on the surface, to have been another crushing year for Ferrari, as they ended the campaign on 204 points and 103 ahead of second placed BMW Sauber. In truth the exclusion of McLaren-Mercedes head really settled the Championship, for the British squad would have taken the crown had they been allowed to score points after the "Spygate Scandal" ruled then out. Third would go to Renault, concluding their title defence with a miserable tally of 51, with all eleven constructors having registered points across the campaign.

Only points scoring drivers are shown.

Retrieved from "https://f1.fandom.com/wiki/2007_Brazilian_Grand_Prix?oldid=89584"
Community content is available under CC-BY-SA unless otherwise noted.