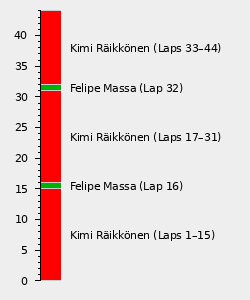 The LXIII ING Grand Prix de Belgique, otherwise known as the 2007 Belgian Grand Prix, was the fourteenth round of the 2007 FIA Formula One World Championship, staged at the Circuit de Spa-Francorchamps near Spa, Belgium, on 16 September 2007.[1][2] The race, which marked the return of Spa and the Belgian Grand Prix to the F1 calendar, would see Kimi Räikkönen claim a dominant victory, as events off circuit overshadowed the weekend.[2]

In the build-up to the Grand Prix the FIA had held a hearing on 13 September, which investigated new evidence in the "Spygate Scandal" between McLaren-Mercedes and Ferrari.[3] The investigation concluded that Ferrari technical secrets had been in McLaren's possession and that discussions about its use had been held between team personnel.[3]

McLaren were slapped with a record $100 million fine, excluded from the 2007 Championship, and would have to submit all of their technical documents to the FIA when they homologated their 2008 car.[3] However, having given information to the FIA tribunal in return for immunity from punishment, McLaren's drivers Lewis Hamilton and Fernando Alonso, first and second in the Championship, would be allowed to keep their points, and could continue to compete for the Drivers' Championship.[2]

With McLaren excluded from the Constructors' Championship Ferrari could wrap-up the title in Spa, and duly claimed a front-row lock out in qualifying as Räikkönen claimed pole ahead of Felipe Massa.[2] Alonso and Hamilton would share the second row in the two McLarens, while the BMW Saubers of Robert Kubica and Nick Heidfeld were split by Nico Rosberg, before Kubica was slapped with a grid penalty.[2]

During qualifying news emerged of the death of World Rally Champion Colin McRae in a helicopter crash, a man known to many in the paddock, and a personal friend of David Coulthard.[4]

The start of the race saw the two Ferraris pull away cleanly, formation flying into La Source with Räikkönen ahead of Massa.[2] Behind, Hamilton challenged Alonso for third but was shoved wide, with the rest of the field squeezing into the hairpin with a fair amount of rubbing.[2]

With that the Ferraris were away, with the McLarens simply unable to match the pace of the scarlet cars during the first stint of the race.[2] Elsewhere, Giancarlo Fisichella became the race's first retirement with a suspension failure on lap two, while Sebastian Vettel was forced to stop early with a handling issue which stemmed from a collision early on.[2]

The first round of stops saw little change to the order, with Massa briefly inheriting the lead when Räikkönen stopped on lap fifteen.[2] However, a battle for the lead would never emerge, with Räikkönen having enough in hand to keep Massa at bay as they exchanged a series of fastest laps.[2]

The order stabilised once again, with the only changes coming as retirements removed Coulthard and Jenson Button from contention.[2] The second round of stops played out much as the first, with Massa getting one lap in the lead before pitting, while Alonso and Hamilton could make no progress against the Ferraris.[2]

With that the race was run, with Räikkönen cruising through ahead of Massa to secure a dominant one-two and the Constructors Championship for Ferrari.[2] Alonso finished third to complete the podium and move just two points behind teammate Hamilton in the Drivers' Championship, with the Brit himself having finished a lonely fourth.[2] Heidfeld, Rosberg, Mark Webber and Heikki Kovalainen claimed the remaining points.[2]

Fernando Alonso would inch closer to Lewis Hamilton at the top of the Championship hunt with victory in Italy, the Spanish racer closing the gap to just three points with four rounds to go. They had both increased their advantage over third placed Kimi Räikkönen, who had slipped fifteen behind Alonso, while Felipe Massa was on the verge of dropping out of the hunt altogether in fourth, having fallen 23 behind. Elsewhere, Nick Heidfeld was still mathematically in the hunt in fifth, but effectively needed to win all four of the remaining races, and see Hamilton fail to score.

In the Constructors Championship it was McLaren-Mercedes who continued to lead the way, and had extended their advantage to 23 points over Ferrari. Furthermore, with third placed BMW Sauber falling 80 points behind and out of mathematical range, there was a real threat that the FIA Hearing scheduled for 13 September could decide the Constructors Championship if McLaren were thrown out of the Championship. The Swiss-German alliance would therefore remain in the hunt, but would still have to overcome a 57 point deficit.

The full entry list for the 2007 Belgian Grand Prix is outlined below:

The full qualifying results for the 2007 Belgian Grand Prix are outlined below:

The full results for the 2007 Belgian Grand Prix are outlined below:

Victory for Kimi Räikkönen moved the Finn back into title contention leaving Belgium, although Räikkönen still faced a thirteen point deficit with three races to go. That made him the "dark horse" for the title, as Lewis Hamilton continued to lead the charge ahead of his teammate Fernando Alonso. The Spaniard had, however, managed to close the Brit's advantage to just two points as the European season came to an end, with fourth placed Felipe Massa set to fall out of the fight if he failed to outscore Hamilton in Fuji.

With McLaren-Mercedes having been excluded Ferrari had a clean shot at claiming the Constructors Championship in Spa, and they duly took it, a one-two leaving them on 161 points. BMW Sauber hence had to settle for second in the Championship with three rounds to go, leaving most of the intrigue in the fight for third. That was to be contest by Renault and Williams-Toyota, with Red Bull-Renault and Toyota realistically too far back to challenge.