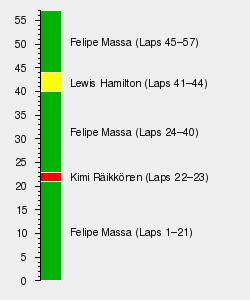 The 2007 Bahrain Grand Prix, officially the 2007 Formula 1 Gulf Air Bahrain Grand Prix was the third race of the 2007 FIA Formula One World Championship, which took place at the Bahrain International Circuit in Sakhir, Bahrain, on 15 April 2007.[1][2] The race was won by Ferrari driver Felipe Massa, as Lewis Hamilton became the first driver to finish on the podium in each of his first three races.[2]

Qualifying had seen Massa secure an impressive pole position, topping all three sessions en-route to beating Hamilton by three tenths of a second.[2] Kimi Räikkönen and Fernando Alonso would share the second row, while the two BMW Saubers secured a third row lockout, Nick Heidfeld ahead of Robert Kubica.[2]

The start of the race would see Massa ease ahead of Hamilton to claim an early lead, while Räikkönen and Alonso squabbled for third.[2] Alonso would emerge ahead as the field filtered through the second and third corners, before an accident at turn four brought out the Safety Car for the first time in 2007.[2]

The cause of the SC's appearance would be a what appeared to be a three-way collision, as Jenson Button, Adrian Sutil and Scott Speed came together at the back of the field.[2] However, replays showed that Sutil had smacked into Speed as the field braked for the right-hander, while Button had tipped himself into a spin touching David Coulthard.[2]

The restart came at the start of lap four, with Massa attempting to escape from Hamilton and Alonso, as Räikkönen misread the happenings ahead and dropped back.[2] He hence lost a handful of time and had to push to catch back up, with the two BMW Saubers initially able to harass him.[2]

Räikkönen would quickly get on terms with Alonso as the leaders broke away from the pack, while Massa remained under constant pressure from Hamilton for the lead.[2] Indeed, the British rookie was pushing the Brazilian so hard that they established a gap of their own over Alonso and Räikkönen within ten laps.[2]

Hamilton was the first of the leaders to make a scheduled stop on lap twenty, diving in to replace his soft Bridgestone tyres with the harder prime compound.[2] Massa ventured in a lap later and rejoined ahead, handing the lead to Alonso who seemed to be struggling the most with his tyres.[2] He would, however, suffer the consequences for being the last of the leaders to stop, as Räikkönen swept past him to secure third when the Spaniard pitted.[2]

Alonso's pace would not improve on fresh rubber, with the Spaniard soon slipping out of contention and behind the #9 BMW Sauber of Heidfeld without too much resistance.[2] The rest of the second stint, however, would be focused on the fight between Renault and customers Red Bull-Renault, which saw David Coulthard and Mark Webber pass Giancarlo Fisichella for seventh and eighth, only to retire within five laps of each other.[2]

The second round of stops would have no impact on the leaders, with Massa retaining the lead ahead of Hamilton, while Räikkönen made no ground on the lead duo.[2] Heidfeld would likewise retain fourth ahead of Alonso, having built a ten second lead over the Spaniard, while Kubica had dropped into a world of his own in sixth.[2]

The final stint of the race would see little action of note, with Massa able to maintain a two second lead over Hamilton to secure the race victory, also setting fastest lap to secure a maiden Hattrick.[2] Hamilton set a record of his own by finishing second, beating Peter Arundell's 1964 record for most consecutive podiums at the start of a rookie season, while Räikkönen was a lonely third.[2]

Behind the Finn, Heidfeld resisted a late recovery charge from Alonso to secure fourth, while Kubica, Jarno Trulli and Fisichella collected the remaining points.[2] Furthermore, the results of the race meant that there were three drivers tied for the lead of the Championship, with Alonso, Räikkönen and Hamilton all level on 22 points, the first time that this had happened in the World Championship since the 1950 Indianapolis 500.[2]

Victory, combined with second place on the opening day, meant it was reigning Champion Fernando Alonso who led the title hunt after the Malaysian Grand Prix, holding eighteen points to his name. Kimi Räikkönen had been forced to make way for him, a first and a third in the opening races leaving him two behind on sixteen, while Lewis Hamilton had retained third on fourteen. Nick Heidfeld, Giancarlo Fisichella and Felipe Massa had likewise held station behind, as Jarno Trulli and Heikki Kovalainen had added their names to the scoresheet.

In the Constructors Championship it was status quo at the head of the pack, as McLaren-Mercedes had opened out a nine point lead in Malaysia. Ferrari retained their spot in second as the Anglo-German alliance's closest challengers, before a thirteen point gap back to BMW Sauber in third. Renault and Toyota completed the early top five, the latter having overhauled customers Williams-Toyota in Sepang.

The full entry list for the 2007 Bahrain Grand Prix is outlined below:

The full qualifying results for the 2007 Bahrain Grand Prix are outlined below:

The full results for the 2007 Bahrain Grand Prix are outlined below:

For the first time since the inaugural season of Formula One World Championship there would be a three-way tie at the head of the field after the opening three rounds, with three drivers on 22 points. Fernando Alonso was technically ahead by virtue of a race win and a second place, while Kimi Räikkönen was second with a win and two thirds. Lewis Hamilton was third man in the trifecta without a win, while Felipe Massa had moved into fourth on seventeen points.

In the Constructors Championship it was McLaren-Mercedes who led the charge, although their lead had been reduced at the head of the hunt. Ferrari were the team to do the damage, moving onto 39 points, while BMW Sauber had lost more ground in third, slipping 21 behind the Scuderia. Renault, Toyota and Williams-Toyota were the only other scorers.