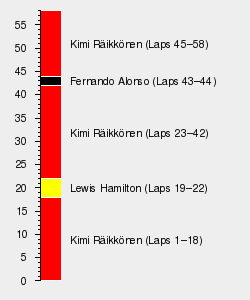 The 2007 Australian Grand Prix, alternately known as the 2007 Formula 1 ING Australian Grand Prix, was the opening round of the 2007 FIA Formula One World Championship, staged at the Albert Park Circuit in Melbourne, Australia, on 18 March 2007.[1] The race would be notable as the debut for future World Champion Lewis Hamilton, as Kimi Räikkönen swept to victory on his debut for Ferrari.[1]

The winter of 2006 had been dominated by big name moves at the head of the field, which had been sparked by the retirement of Michael Schumacher at the end of the previous season.[2] Räikkönen hence moved to the Scuderia to take the German's seat, opening the door for defending Champion Fernando Alonso to move to McLaren-Mercedes to partner GP2 Series Champion Hamilton.[2] Alonso's seat at Renault was taken by another GP2 graduate in Heikki Kovalainen, with Giancarlo Fisichella taking over as their lead driver.[2]

Away from the driver front and there had been some significant changes to the cars, with Michelin having pulled out of the series to leave Bridgestone as the sole tyre supplier.[2] Furthermore, teams would have to use both a "hard" (prime) and a "soft" (option) tyre during the race, while there would also be severe testing limitations implemented for the season.[2]

Into the opening weekend itself and it was Ferrari's new signing who streaked to pole position in qualifying, Räikkönen beating Alonso by 0.421s.[1] Nick Heidfeld was third for BMW Sauber ahead of debutante Hamilton, while Takuma Sato caused a stir by getting into Q3 with Super Aguri-Honda, beating the factory Honda squad in the process.[1]

Räikkönen made a clean getaway to claim an early lead at the start of the race, while Alonso was immediately passed by Heidfeld, only to try and rally back and hence allow teammate Hamilton to sweep past for third.[1] At the back, meanwhile, Anthony Davidson stalled but managed to fire his car back up, only to be clipped by Adrian Sutil in the Spyker-Ferrari.[1]

The race would quickly settle into a sedate rhythm, with Räikkönen easing away from Heidfeld, while Hamilton and Alonso tried in vain to find a way past the BMW Sauber.[1] Elsewhere, Christijan Albers had become the first retirement of the season by getting stuck in the gravel at the Sports Centre, Felipe Massa was struggling to climb up the order, while Jenson Button and Rubens Barrichello were having a poor day in strikingly liveried Hondas.[1]

McLaren's race would, however, come alive as the first round of stops began, with Heidfeld diving in on lap fifteen to release the two silver cars.[1] Räikkönen was the next driver to pit, four laps after the German racer, with Alonso stopping a lap later.[1] Hamilton hence led on his debut for two laps before making his stop, with both himself and Alonso jumping Heidfeld.[1]

Yet, there would be no catching Räikkönen at the head of the field, the #6 Ferrari continuing to build a lead over the two McLarens.[1] Attention hence focused on the midfield, with Kovalainen enduring a miserable debut by spinning at the Jones chicane, Nico Rosberg fighting with the two factory Toyotas, and David Coulthard making a spectacular exit by crashing over the top of Alexander Wurz.[1]

Back with the leaders and the second round of stops were sparked by Räikkönen, who duly rejoined in third behind the two McLarens.[1] Hamilton was next to venture into the pitlane and rejoined behind the Finn, only for Alonso to charge in a lap later and claim second from the Brit.[1]

With that the fight for victory was over, with Räikkönen nursing his car through the final laps to secure victory, becoming the first Ferrari debutante to do so since Nigel Mansell won the 1989 Brazilian Grand Prix.[1] Alonso and Hamilton completed the podium, the latter becoming the first rookie to do so since Jacques Villeneuve in 1996, while it was also the first podium in which all drivers had been making their debuts for their teams.[1]

Heidfeld was best of the rest in fourth, twenty seconds behind Hamilton, with Fisichella and Massa the last of those on the lead lap.[1] Rosberg and Ralf Schumacher completed the points scorers, with seventeen drivers completing the opening round.[1]

The full entry list for the 2007 Australian Grand Prix is outlined below:

The full qualifying results for the 2007 Australian Grand Prix are outlined below:

The full results for the 2007 Australian Grand Prix are outlined below:

It was Kimi Räikkönen who had opened the season with victory and the lead in the Championship, leaving Australia with ten points to his credit. Defending Champion Fernando Alonso began his title defence in second, with new teammate Lewis Hamilton and impressive third after his debut. Nick Heidfeld and Giancarlo Fisichella completed the opening day top five, with Felipe Massa, Nico Rosberg and Ralf Schumacher also on the board.

In the Constructors Championship it was McLaren-Mercedes who led the way, a point ahead of Ferrari in second after the opening race. An eight point gap followed before BMW Sauber appeared in third, with Renault, Williams-Toyota and the factory Toyota completing the scorers.