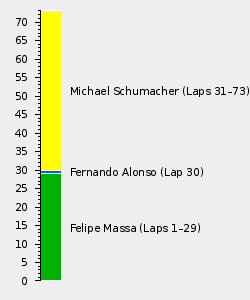 The 2006 United States Grand Prix, advertised as the XXXV Vodafone United States Grand Prix, was the tenth round of the 2006 FIA Formula One World Championship, staged at the Indianapolis Motor Speedway in Indiana, USA, on 2 July 2006.[1] The race, which was the first US Grand Prix to be held after the controversial events of the 2005 race, would be dominated by Ferrari duo Michael Schumacher and Felipe Massa.[1]

Unlike the race twelve months before there were no tyre issues for the Michelin shod section of the field, with no failures during practice. This was largely attributed to the fact that the French manufacturer had brought harder tyres, as well as the decision to allow tyre changes during the Grand Prix itself.

Those changes to the Michelin tyre may have proved vital in qualifying, for Michael Schumacher led teammate Felipe Massa to a front-row lock-out for the Bridgestone shod Ferraris.[1] Giancarlo Fisichella was best of the rest ahead of Rubens Barrichello, while Championship leader Fernando Alonso would start from fifth.[1]

Unfortunately memories of the disasterous 2005 would re-emerge at the start of the race, for two accidents would drastically thin the field.[1] Indeed, after Massa had out-dragged Schumacher to claim the lead at the head of the pack, a badly misjudged lunge from Christian Klien triggered a colossal accident.[1]

The Austrian racer had decided to try the dusty inside line into turn one to dive past the two Midland-Toyotas, only to get caught out on the dust and slam into Mark Webber, before collecting Christijan Albers and being rammed by an unsighted Franck Montagny.[1] That sent several cars scattering across the circuit and the grass at turn two, where Juan Pablo Montoya smashed into the back of teammate Kimi Räikkönen, prior to sliding into Jenson Button's Honda which was sent into the side of Nick Heidfeld.[1]

Heidfeld's exit was the most spectacular of all, for the BMW Sauber was sent into a triple barrel roll before crashing back down in the grass right-side-up.[1] The Safety Car was instantly called to clear up the mess, as Montoya, Räikkönen, Klien, Montagny, Heidfeld, Webber and Scott Speed walked back to the pits.[1]

The restart came a few laps later, just in time to see Takuma Sato take Monteiro out of the equation, followed by an engine failure for Jacques Villeneuve.[1] That incident, combined with collision damage curtailing the race of Button, meant that half the field were out with 50 laps still to run.[1]

Ignorant of all of this, however, were the two Ferraris, which eased away from the two Renaults at the restart to secure a dominant lead.[1] Alonso briefly led the chase but lacked the pace to challenge, and would be ultimately instructed to allow teammate Fisichella through before the first stops.[1] Indeed, so poor was the Spaniard's pace that he also slipped behind Barrichello and the two Toyotas.[1]

With Massa leading Schumacher the question was whether the German's protege would be allowed to win, and given Ferrari's reputation that seemed to be an unlikely conclusion.[1] Somewhat unsurprisingly the move would come during the first round of stops, with Schumacher stopping first on lap 29, before delivering an excellent out-lap to jump his teammate when the Brazilian stopped a lap alter.[1]

That proved to be that for the race, barring a late retirement for Ralf Schumacher that brought the field down to just nine finishers.[1] There would also be a late fight between David Coulthard, Vitantonio Liuzzi and Nico Rosberg, although that battle saw little physical battling.[1]

Michael Schumacher hence claimed a dominant victory ahead of teammate Massa, the first Ferrari one-two since the 2005 US GP.[1] Fisichella completed the podium ahead of Trulli and Alonso, with the rest of the points going to Barrichello, Coulthard and Liuzzi.[1]

The race would prove to be the last Grand Prix start for Montoya, as the Colombian racer quit McLaren-Mercedes to prepare for NASCAR in 2007.

At the halfway point in the 2006 FIA Formula One World Championship it was clear that Fernando Alonso was the overwhelming favourite to retain his title, having dropped just six points across the opening nine rounds. He left Canada with a huge 25 point lead over Michael Schumacher in second, and a 45 point advantage over Kimi Räikkönen in third. The half-term top five was then completed by Giancarlo Fisichella and Felipe Massa, with sixteen drivers having scored.

In the Constructors Championship it was Renault who had command at the halfway mark, leaving Canada with 121 points and seven wins to their credit. Ferrari were their closest challengers and the only other team to have claimed a race win, but faced a 34 point gap between themselves and the French squad. McLaren-Mercedes were likewise a distant third, well clear of fourth placed Honda, with BMW Sauber rounding out the mid-season top five.

The full entry list for the 2006 United States Grand Prix is outlined below:

The full qualifying results for the 2006 United States Grand Prix are outlined below:

The full results for the 2006 United States Grand Prix are outlined below:

For the first time in 2006 Fernando Alonso had failed to finish in the top two in the Championship, and hence had seen his title lead reduced. However, the Spaniard had still scored points, and so the damage done to his lead by race winner Michael Schumacher had been minimal, the German ace only closing the gap to nineteen points. Behind, Giancarlo Fisichella had moved ahead of Kimi Räikkönen after the Finn's retirement, while Felipe Massa had gained ground on both in fifth.

In the Constructors Championship the US Grand Prix had been a hugely beneficial day for Ferrari, who closed the gap to the leaders and broke through the 100 point barrier. However, the Scuderia would remain 26 points behind Renault at the end of the weekend, and had therefore only really enhanced their grip on second. Indeed, a double non-score for McLaren-Mercedes had left them in a now distant third, while Toro Rosso-Cosworth were on the board for the first time in ninth.

Retrieved from "https://f1.fandom.com/wiki/2006_United_States_Grand_Prix?oldid=87891"
Community content is available under CC-BY-SA unless otherwise noted.