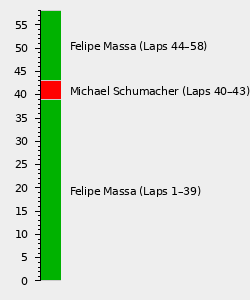 The 2006 Turkish Grand Prix, alternately known as the II Petrol Ofisi Türkiye Grand Prix'si, was the fourteenth round of the 2006 FIA Formula One World Championship, staged at Istanbul Park near Istanbul, Turkey, on 27 August 2006.[1] The race would see Felipe Massa sweep to a maiden victory for Ferrari, leaving the Scuderia just two points behind Renault atop the Constructors Championship.[1]

Qualifying would be dominated by the young Brazilian driver, who topped two of the sessions en-route to his maiden pole position.[1] Veteran teammate Michael Schumacher would line-up in second, one place ahead of main title rival Fernando Alonso, who had his teammate Giancarlo Fisichella in fourth.[1]

A Ferrari/Renault duel for victory was expected ahead of the race, and so it proved at the start, with all four drivers entering the first corner jostling for position.[1] Ultimately it was Massa who emerged ahead of Schumacher and Alonso, while Fisichella was sent into a spin that caused chaos behind.[1]

Presented with pirouetting Renault Kimi Räikkönen would take avoiding action, only to receive a blow into the side from a spinning Scott Speed which punctured his right-rear tyre.[1] Fisichella, meanwhile, would receive a whack from Nick Heidfeld, Ralf Schumacher smacked teammate Jarno Trulli, while Tiago Monteiro had a terminal collision with Takuma Sato, who had been broadsided by Trulli's Toyota.[1]

Fortunately there would be no need for the Safety Car, with everyone bar Monteiro limping back to the pits, and very little carbon fibre landing on the circuit.[1] That hence allowed Massa to build a lead at the head of the field ahead of Schumacher, although with Alonso in third there remained the ever present question of whether Ferrari would swap their two drivers.[1]

Yet, no call was immediately made, and so Massa would escape up the road by five seconds by lap thirteen, only for the safety car to finally make an appearance.[1] The cause was a spin and a stall for Vitantonio Liuzzi at turn one while running in seventh, which prompted an en-masse sweep into the pits.[1]

Massa would take the restart still at the head of the field, although his main opponent was now Alonso, who had jumped Schumacher after the German ace had to wait for Massa's stop to be completed.[1] However, despite the fact that the Michelin tyres were quicker to reach temperature than the Bridgestones on the Ferraris, Alonso could do nothing to prevent Massa escaping up the road.[1]

With the battle for the lead already over attention focused lower down the field during the second stint, with Robert Kubica putting up a ferocious defence to keep Fisichella at bay.[1] Elsewhere, Pedro de la Rosa and Rubens Barrichello would creep up the order, while Sakon Yamamoto had another embarrassing exit as he spun into the gravel.[1]

The second round of stops passed without issue, meaning Massa still held a healthy lead over Alonso.[1] However, all was not well with the #1 Renault, and as the race entered its final phase Alonso would find his mirrors full of Schumacher's #5 Ferrari.[1]

Their fight would rage through to the final lap of the race, with Schumacher trying, and failing to setup a lunge into the final chicane to claim second.[1] Out front, meanwhile, a jubilant Massa swept across the line to claim his maiden victory, five seconds clear of Alonso and Schumacher.[1] Jenson Button was best of the rest in fourth ahead of de la Rosa, with Fisichella, Ralf Schumacher and Rubens Barrichello claiming the remaining points.[1]

There would be some controversy on the podium, after Mehmet Ali Talat, who presented Massa with the winner's trophy, was announced as the "President of the Turkish Republic of Northern Cyprus".[2] The Republic of Cyprus filed a complaint to the FIA about the ceremony which, after an investigation, fined the Turkish GP organisers $5,000,000 on 19 September 2006.[2]

Heading into the Summer break it was Fernando Alonso who led the title hunt, holding a ten point lead at the head of the field. Michael Schumacher had closed to within a race's worth of points as a result of the Hungarian Grand Prix, as those two set about duelling for the title for the rest of the season. Behind, a three-way fight for third was likewise set to rumble for the rest of the season, with Felipe Massa, Giancarlo Fisichella and Kimi Räikkönen separated by just a single point.

Renault led the charge in the Constructors Championship as the field took three weeks off, heading Ferrari by seven points. Indeed, a strong run since the North American tour had allowed the Scuderia to all but eliminate the French manufacturer's lead, and hence meant they had momentum heading into the final phase of the season. Behind, McLaren-Mercedes were set to finish a distant third, albeit facing a potential, if remote, challenge from Honda after Jenson Button's breakthrough win.

The full entry list for the 2006 Turkish Grand Prix is outlined below:

The full qualifying results for the 2006 Turkish Grand Prix are outlined below:

The full results for the 2006 Turkish Grand Prix are outlined below:

Fernando Alonso had managed to extend his lead in the Championship as a result of the Turkish Grand Prix, leaving as the winner of another straight duel with main title rival Michael Schumacher. Indeed, the Spaniard headed to Italy with a twelve point margin over the German ace, with those two over thirty points clear of Felipe Massa in third. The Brazilian himself had opened a ten point gap over Giancarlo Fisichella in the fight for third, with Kimi Räikkönen a further three behind.

In the Constructors Championship Ferrari had done a lot of damage to Renaults lead, leaving Turkey just two points behind heading to their home race. Momentum suggested that the Scuderia would overhaul the French manufacturer in front of the loyal tifosi, and had looked stronger on power based circuits throughout the campaign. Elsewhere, McLaren-Mercedes were still mathematically in the title battle by a single point, but would require four straight one-two finishes, and see neither Renault nor Ferrari score for the rest of the season.