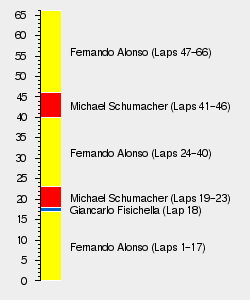 The 2006 Spanish Grand Prix, officially known as the XLVIII Gran Premio Telefonica de España, was race number six of the of the 2006 FIA Formula One World Championship, which took place at the Circuit de Catalunya in Barcelona, Spain, on 14 May 2006.[1] The race would see Fernando Alonso claim victory on home soil to extend his Championship lead, running unopposed throughout at the head of the field.[1]

Alonso had started his home race weekend in perfect fashion, claiming pole position ahead of Renault teammate Giancarlo Fisichella.[1] Title rival Michael Schumacher would line up in third alongside his Ferrari partner Felipe Massa, with Rubens Barrichello lining up in fifth for Honda.[1]

Furthermore, it would be formation flying for Renault at the start of the race, with Alonso sprinting off the line ahead of teammate Fisichella to claim the lead.[1] It was a similar picture behind as Schumacher and Massa got away well in the Ferraris, although Massa almost managed to draft alongside his teammate before deciding against a move.[1]

A surprisingly clean start saw Kimi Räikkönen make the most ground of any driver, leaping from ninth to fifth, while teammate Juan Pablo Montoya also moved up the order.[1] The two Toyotas were the biggest losers as they slipped down to the back of the top ten, while Scott Speed also made notable progress in the Toro Rosso-Cosworth.[1]

The early stages saw Alonso stamp his authority on the race, blasting away to build a four second lead within four laps.[1] Fisichella dutifully dropped back to keep Schumacher and Massa in check, with Räikkönen looming behind, as the rest of the field ran together in pairs.[1]

Indeed, with the majority of the field running with teammates nose-to-tail there was little action of note, until Ralf Schumacher made a mess of a lunge on Toyota teammate Jarno Trulli to rip the front wing from his car.[1] Jenson Button, meanwhile, was getting frustrated behind teammate Barrichello, and would repeatedly ask to be let past the Brazilian racer as he could not force a move.[1]

As had become increasingly familiar in 2006 it was only when the first pitstop window opened that the order was changed, with Alonso dropping to fourth after stopping on lap seventeen.[1] Fisichella inherited the lead but would only stay out for a single lap, before Schumacher made his bid for victory, completing four quick laps in clear air before diving in for his stop.[1]

Ultimately Schumacher would only just manage to jump Fisichella with his longer first stint, out-braking the #2 Renault into the first corner as he exited the pitlane.[1] He would instantly break away to chase Alonso having claimed second, while Fisichella went for a bounce across the gravel at turn three and hence dropped back into the clutches of Massa, Räikkönen and Button.[1]

Once again the race would settle into a procession, with Alonso able to again inch away from Schumacher, while Fisichella, Massa, Räikkönen and Button remained in a tense stalemate.[1] Behind, there was little action of note, although Barrichello and Nick Heidfeld would find themselves battling at the bottom end of the points.[1]

With that the race was effectively over, with Alonso easing away in the final laps to claim victory over Schumacher by almost twenty seconds.[1] Fisichella would then complete the podium ahead of Massa, with Räikkönen and Button having fallen away from the battle for third after the second round of stops.[1] Barrichello and Heidfeld completed the points, a lap behind the leaders.[1]

Fernando Alonso had seen his early Championship lead chipped away at as a result of the European Grand Prix, leaving the Nürburgring with a thirteen point advantage. Michael Schumacher had been the man to do the damage, his second win of the season leaving him on 31 points and in a clear second place. Kimi Räikkönen had hence lost ground in third but remained five ahead of Giancarlo Fisichella, while Felipe Massa moved into the top five, level on points with Juan Pablo Montoya.

In the Constructors Championship Ferrari had managed to take another point out of Renault's early lead, although the French squad still held a decent margin. Indeed, Renault left Germany with a fourteen point lead over the Scuderia, while third placed McLaren-Mercedes were a further six behind. Honda, meanwhile, had enhanced their grip on fourth ahead of BMW Sauber, with Williams-Cosworth, Toyota and Red Bull-Ferrari the only other scorers.

The full entry list for the 2006 Spanish Grand Prix is outlined below:

The full qualifying results for the 2006 Spanish Grand Prix are outlined below:

The full results for the 2006 Spanish Grand Prix are outlined below:

Fernando Alonso used his third victory of the campaign to move fifteen points clear at the head of the Championship hunt, moving onto 54 points. Michael Schumacher remained his closest challenger in second, with a twelve point margin of his own over third placed Kimi Räikkönen. Giancarlo Fisichella and Felipe Massa then completed the top five, with no drivers having added their names to the score sheet in Spain.

In the Constructors Championship Renault had managed to increase their lead at the head of the field, restoring their one-race advantage after their double podium. Indeed, they left Spain with a nineteen point lead over Ferrari in second, while McLaren-Mercedes in third sat 36 behind the French manufacturer. Honda were next on 24 points, double the tally of BMW Sauber, with three constructors still yet to threaten the points in 2006.