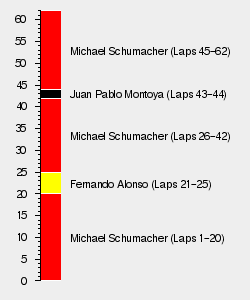 The 2006 San Marino Grand Prix, officially the XXVI Gran Premio Foster's di San Marino, was race number four of the 2006 FIA Formula One World Championship, which took place at the Autodromo Enzo e Dino Ferrari in Imola, Italy, on 23 April 2006.[1] The race, which proved to be the last Grand Prix to be staged at Imola until 2020, would see Michael Schumacher claim a popular victory for Ferrari on home turf.[1]

Indeed, it would be a record breaking weekend for the German ace, with Schumacher securing his 66th pole position in qualifying, beating Ayrton Senna's old mark of 65.[1] The Hondas of Jenson Button and Rubens Barrichello would split Schumacher from teammate Felipe Massa, while Championship leader Fernando Alonso started from fifth.[1]

The start of the race saw the #5 Ferrari instantly sprint away into an early lead, with Button leading the chase from second.[1] Behind, Alonso would follow Massa past Barrichello as the field thundered into Tamburello, before an accident behind would end the career of one of the back markers.[1]

That driver was Yuji Ide, who smashed into the back of Christijan Albers on the brakes for Villeneuve with enough force to send the Midland-Toyota into a series of barrel rolls.[1] While Albers escaped his ruined car unharmed, Ide would continue with a smashed front wing, and stopped for repairs as the Safety Car emerged from the pits.[1] He would go on to retire on lap 23, before an FIA tribunal held on 10 May 2006 decided to revoke Ide's FIA Super Licence due to his erratic driving.[2]

On track, meanwhile, the race would resume at the start of lap four, with Schumacher again easing away from Button at the restart.[1] The Brit was left to fend off the attentions of Massa and Alonso for second, with the top four all breaking clear from a struggling Barrichello.[1]

Barrichello duly became the first of the leaders to stop on lap eight, only for an issue with the fuel rig to dump him to the back of the field.[1] Button, meanwhile, would also miss out after making his early stop, with a similar issue, combined with a sticking wheel nut, ending his hopes of victory.[1]

That left Schumacher ahead of Massa and Alonso, and would hence allow the Scuderia to play a tactical game with Renault, with Massa easing his pace.[1] That hence allowed Schumacher to sprint clear as their pitstops loomed, with Alonso only released from Massa's hold when the Brazilian made his first stop.[1]

By that stage Schumacher had made his first stop and rejoined without losing the lead, although now released Alonso was able to close the gap.[1] However, before he could catch the #5 Ferrari the Spaniard had to make his stop, and duly rejoined in second on lap 25 just ahead of Button and Juan Pablo Montoya who were fighting for third with Massa.[1]

With that Alonso was away, demolishing Schumacher's advantage in ten laps to harass the Ferrari at every opportunity to try and claim the lead.[1] Yet, despite the obvious issues that Schumacher's car was having, the #1 Renault could not force a move, even with a series of lunges at Tosa to try and force the German ace into a mistake.[1]

The leaders made their second and final stops in tandem, with Schumacher managing to gain some time with a swifter stop.[1] Their battle hence continued in the same vain as before for the final phase of the race, as behind Button's battle for the podium was ended by another pitlane mistake, this time caused by the lollipop man telling him to go even though his Honda was still attached to the refuelling rig.[1]

With two laps to go the fight for victory would also be over, with Alonso making a mistake at Villeneuve to leave him too far back to challenge Schumacher.[1]< The #5 Ferrari duly swept across the line to claim victory ahead of Spaniard, while Montoya fended off Massa's attentions to complete the podium.[1] Kimi Räikkönen would close on the pair but ran out of time to challenge in fifth ahead of Mark Webber, Button scrambled through to seventh, while Giancarlo Fisichella rounded out the scorers in eighth.[1]

A second victory in the opening three rounds left Fernando Alonso in early command of the Championship, having left Australia with 28 points to his name. That translated into a fourteen point lead over teammate Giancarlo Fisichella in second, with the Italian racer level on points with third placed Kimi Räikkönen. Behind, Michael Schumacher and Jenson Button remained tied on eleven points, with fifteen drivers on the score sheet.

In the Constructors Championship Renault had already built a comfortable lead at the head of the pack, leaving Australia with more than a race's worth of points in hand. Indeed, McLaren-Mercedes had slipped nineteen behind the French squad as a result of the battle of Australia, but had moved eight clear of Ferrari in third. Honda, meanwhile, had retained fourth ahead of BMW Sauber, with eight constructors having scored across the opening three rounds.

The full entry list for the 2006 San Marino Grand Prix is outlined below:

The full qualifying results for the 2006 San Marino Grand Prix are outlined below:

The full results for the 2006 San Marino Grand Prix are outlined below:

Fernando Alonso had seen his lead at the top of the Championship once again grow as a result of the San Marino Grand Prix, leaving Imola with a fifteen point advantage. Race winner Michael Schumacher had, however, moved into second courtesy of his victory, three ahead of third placed Kimi Räikkönen. Giancarlo Fisichella and Juan Pablo Montoya were a further three behind the Finn, while Jenson Button had slipped to sixth, two points off.

In the Constructors Championship Renault had seen their lead slightly reduced, although they still held a very healthy eighteen point margin. McLaren-Mercedes had hence inched closer to their opponents in second, although a strong weekend for Ferrari had seen the Scuderia double their tally, and move to within three points of the Anglo-German alliance. Honda were next, with half the points of Ferrari, while BMW Sauber rounded out the top five.