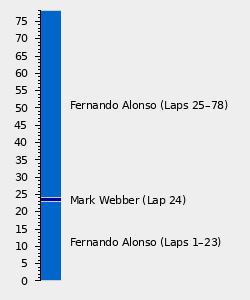 The LXIV Grand Prix de Monaco, alternately known as the 2006 Monaco Grand Prix, was the seventh round of the 2006 FIA Formula One World Championship, staged at the Circuit de Monaco in Monte Carlo, Monaco, on 28 May 2006.[1] The race would see Fernando Alonso claim victory, although that was overshadowed by the antics of his major title rival Michael Schumacher in qualifying.[1]

In one of Schumacher's more infamous moments, the German ace would stop his car and block the track at Rascasse after missing the apex, an action that ultimately resulted in him being sent to the back of the grid.[1] That left Alonso on pole position ahead of Mark Webber, with Kimi Räikkönen and Juan Pablo Montoya sharing the second row for McLaren-Mercedes.[1]

The start of the race proved unusually tame for the Monaco Grand Prix, with the only incident of note coming at the back of the field, Tiago Monteiro managing to remove his front wing on the side of teammate Christijan Albers.[1] Out front, meanwhile, Alonso would scramble clear of Webber to claim the lead, with the Williams-Cosworth having to defend heavily from the marauding McLarens instead.[1]

The early stages saw Webber's resistance get broken by Räikkönen, with the Australian ace running wide at Sainte Devote and hence allow the #3 McLaren to dive past into Casino Square.[1] The Finn would quickly sprint away to chase Alonso, leaving Webber to fend off Montoya, while at the back of the field Schumacher was making impressive progress.[1]

Yet, having made six positions in the opening three laps, Schumacher progress would be halted by Jenson Button, who was running at a similar pace to the #5 Ferrari.[1] They remained nose-to-tail until the German ace threw a successful lunge past the Honda into the Nouvelle Chicane on lap 21, by which stage the leaders were beginning to make their first stops.[1]

Räikkönen was the first of the leaders to pit, sweeping in on lap 22 followed by Alonso two laps later.[1] The Spaniard duly emerged ahead of the McLaren as Webber inherited the lead, who delivered two stunning laps before making his stop, although it was not enough for the Australian racer to jump Räikkönen's McLaren.[1]

That, however, would be as good as it got for Webber, for the Williams would pick up an exhaust issue that hampered his pace throughout his second stint, and ultimately led to his retirement on lap 46.[1] Alonso and Räikkönen were hence left in a duel for the lead, although when Webber's car ignited as he pulled into the pit exit the Safety Car was called.[1]

Unsurprisingly the appearance of the SC resulted in the majority of the field diving into the pits for their second stops, leaving only the one-stoppers on track.[1] In the resulting shuffle Alonso would retain the lead over Räikkönen, Montoya was promoted to third ahead of one-stopper Rubens Barrichello, while David Coulthard and Michael Schumacher filtered through to complete the top eight.[1]

However, after two laps behind the SC the order would be shuffled again, this time as a result of Räikkönen suffering an electrical failure as a heat shield failed and allowed his wiring loom to melt.[1] That left the McLaren on the sidelines at Portier, with an irate Finn opting to head to his yacht rather than walk back to the McLaren garage.[1]

With Räikkönen watching on from the harbour the race resumed, with Alonso sprinting clear of Montoya to establish an early lead.[1] The order would remain stable until Christian Klien retired on lap 56, followed by a drive through penalty for third placed Barrichello for speeding in the pitlane.[1]

Their removal put Jarno Trulli up into third, where he was set to finish until a hydraulic failure left him on the sidelines with just five laps to go.[1] Coulthard was hence promoted into third, who had been split from Schumacher by Barrichello after the Brazilian had served his stop.[1]

Out front, meanwhile, Alonso would cruise through the closing laps to claim victory, fifteen seconds clear of Montoya in second.[1] Coulthard, meanwhile, would claim a jubilant maiden podium finish for Red Bull, and would ascend the podium draped in a Superman cape.[1] Behind, Barrichello fended off Schumacher to the flag, Giancarlo Fisichella claimed a lonely sixth, while Nick Heidfeld and Ralf Schumacher completed the scorers.[1]

Significantly this was the first, and only, time in F1 history that both factory Ferrari cars had qualified on the final row of the grid.

Fernando Alonso used his third victory of the campaign to move fifteen points clear at the head of the Championship hunt, moving onto 54 points. Michael Schumacher remained his closest challenger in second, with a twelve point margin of his own over third placed Kimi Räikkönen. Giancarlo Fisichella and Felipe Massa then completed the top five, with no drivers having added their names to the score sheet in Spain.

In the Constructors Championship Renault had managed to increase their lead at the head of the field, restoring their one-race advantage after their double podium. Indeed, they left Spain with a nineteen point lead over Ferrari in second, while McLaren-Mercedes in third sat 36 behind the French manufacturer. Honda were next on 24 points, double the tally of BMW Sauber, with three constructors still yet to threaten the points in 2006.

The full entry list for the 2006 Monaco Grand Prix is outlined below:

The full qualifying results for the 2006 Monaco Grand Prix are outlined below:

The full results for the 2006 Monaco Grand Prix are outlined below: