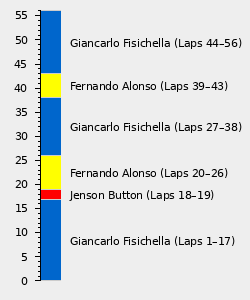 The VIII Petronas Malaysian Grand Prix, otherwise known as the 2006 Malaysian Grand Prix, was the second round of the 2006 FIA Formula One World Championship, staged at the Sepang International Circuit in Sepang, Malaysia, on 19 March 2006.[1] The race would see Giancarlo Fisichella secure victory from pole position, beating teammate Fernando Alonso after a race long game of leap-frog.[1]

Indeed, the difference between the two Renaults had been decided in qualifying, with Fisichella on pole while Alonso could only muster eighth.[1] That allowed Jenson Button to grab second for Honda, Nico Rosberg to secure third in only his second race, and Michael Schumacher to secure fourth for Ferrari before being slapped with a penalty for changing his engine.[1]

The start of the race saw Fisichella instantly sprint into an early lead, leaving Button to consolidate second for Honda.[1] His run was aided by the two Williams-Cosworths, with Rosberg and Mark Webber so focused on one-another as the moved towards the inside wall that they allowed Alonso to sweep straight past them.[1]

Webber eventually managed to scramble into fourth, while Rosberg was jumped by both McLaren-Mercedes and Nick Heidfeld.[1] However, he quickly got back one of those positions as Kimi Räikkönen exited the race in spectacular fashion, a suspension failure resulting from contact at turn four.[1]

Out front, meanwhile, Fisichella stamped his authority on the race, establishing a fair lead over Button as the Brit kept Alonso at bay.[1] Behind, the race would likewise develop into a stalemate behind Webber, with the only source of entertainment coming in the form of Schumacher as he battled his way into the points.[1]

Early retirements would further thin the field, with Rosberg and Webber both retiring with quickfire engine failures while fighting with Juan Pablo Montoya.[1] The put Schumacher into sixth as the first round of stops began, with Fisichella opening the pit-window on lap seventeen.[1]

Button would lead for two laps before making his first stop, handing the lead to Alonso, who was intending to complete the race on one-stop.[1] However, Renault had a change of heart and instead short-fuelled the Spanish ace, believing that keeping out of traffic would be more beneficial than missing out on a second stop.[1]

The ploy worked, for when Fisichella and Button darted into the pits on lap 38, Alonso would have a five lap run in clear air, and hence jumped the #12 Honda as a result.[1] He subsequently went charging off after teammate Fisichella, leaving Button to drift back towards Montoya until his pace returned in the closing stages.[1]

Indeed, the race would rather peeter out, with Fisichella able to win at a canter ahead of teammate Alonso.[1] Button was also allowed to close but had to settle for completing the podium, while Montoya kept out of reach of the battling Ferraris, Felipe Massa emerging ahead of teammate Schumacher.[1] Jacques Villeneuve and Ralf Schumacher secured the remaining points for BMW Sauber and Toyota respectively.[1]

Victory at the opening round of the season meant Fernando Alonso opened his maiden title defence in perfect form, scoring a maximum ten points. Michael Schumacher, meanwhile, had started his campaign in second, two behind, while Kimi Räikkönen completed the opening day top three. The rest of the scorers in Bahrain were Jenson Button, Juan Pablo Montoya, Mark Webber, debutante Nico Rosberg and Christian Klien.

In the Constructors Championship it was Renault who led the way after the opening round, all because of Alonso's win. Indeed, McLaren-Mercedes had matched the French squad's ten point haul at the opening round, but because Alonso had won the race, it was Renault who headed the field on countback. Behind, Ferrari started the season in third ahead of Honda, with Williams-Cosworth and Red Bull-Ferrari having also scored points.

The full entry list for the 2006 Malaysian Grand Prix is outlined below:

The full qualifying results for the 2006 Malaysian Grand Prix are outlined below:

The full results for the 2006 Malaysian Grand Prix are outlined below:

Victory for Giancarlo Fisichella would catapult the Italian racer up the early Championship table, leaving Malaysia in fourth with ten points. However, it was his teammate Fernando Alonso who left Sepang at the head of the pack, and with a fairly ominous seven point lead after just two races. Michael Schumacher had remained as the Spaniard's closest challenger in second, ahead of third placed Jenson Button on countback.

In the Constructors Championship Renault were attempting to make an early break away at the head of the field, and left Malaysia with 28 points to their credit. That left the French manufacturer thirteen clear of Ferrari in second, who were level on points with third placed McLaren-Mercedes. Honda and Williams-Cosworth then completed the top five, with BMW Sauber and Toyota having picked up their first points of the campaign.