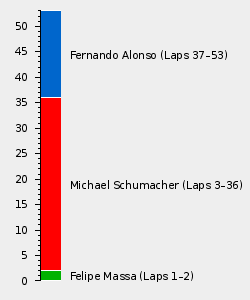 The 2006 Japanese Grand Prix, formally the XXXII Fuji Television Japanese Grand Prix (XXXII フジテレビ日本グランプリ in Japanese) was the seventeenth and penultimate round of the 2006 FIA Formula One World Championship, staged at the Suzuka Circuit in Mie Prefecture, Japan, on 8 October 2006.[1] The race would see Fernando Alonso claim victory and the Championship lead with a race to go, as his main title rival Michael Schumacher suffered a fateful engine failure.[1]

Qualifying had been in Schumacher's favour, although the German ace was beaten to pole position by his Ferrari teammate Felipe Massa.[1] Alonso, meanwhile, would line-up in fifth alongside his teammate Giancarlo Fisichella, with the two Toyotas of Ralf Schumacher and Jarno Trulli separating the title protagonists.[1]

It would be formation flying at the front of the field at the start of the race, with Massa leading Michael Schumacher, while the two Toyotas fended off the Renaults.[1] However, Trulli would soon be overcome by Alonso through the opening lap, putting the Spaniard into fourth, while an identical move would put Jenson Button ahead of Fisichella.[1]

With Alonso hounding Ralf Schumacher Ferrari played their joker early, with Massa moving aside to let teammate Michael Schumacher into the lead at the beginning of lap three.[1] The German ace duly blasted away from the Brazilian to build a five second lead, while Alonso remained stuck behind the #7 Toyota until lap thirteen.[1]

However, despite clearing the troublesome Toyota, Alonso would make very little progress against the Ferraris, with the gap between himself and Schumacher remaining fairly stable.[1] Indeed, Massa had already bailed for his first stop on lap thirteen, with Alonso lasting until lap fifteen, while Schumacher continued for two more laps.[1]

Massa's early stop may have proved crucial, for it allowed Alonso to jump the #6 Ferrari and hence sit in the wake of Schumacher's Ferrari.[1] The lead battle would, however, never fully develop, for the pair seemed to be mired in a constant stream of traffic prior to their second stops.[1]

Yet, just two laps later and the whole race and Championship picture would change, for Schumacher's Ferrari would crawl to a stop at the back of the circuit.[1] A rather nonplussed Schumacher would make a slow walk back to the pits, waving to the crowd as Alonso took over the lead of the race.[1]

With Massa too far back to challenge and third placed Kimi Räikkönen, the only man on Alonso's pace, yet to make his second stop, the race seemed to be over.[1] Indeed, once Räikkönen stopped it was Fisichella who moved into third ahead of Button, with the only fighting on-track during the final stint being found in a duel for the final point between the BMW Saubers.[1]

As such, Alonso cruised through the closing stages to take a comfortable victory, and a ten point lead in the Championship ahead of the season finale in Brazil.[1] Massa and Fisichella completed the podium, with the one-three result for Renault handing them a nine point advantage in the Constructors Championship with a race to go.[1] Button, Räikkönen, Trulli, Ralf Schumacher and Nick Heidfeld secured the remaining points.[1]

A second victory in succession for Michael Schumacher had moved the German ace level on points with long-standing leader Fernando Alonso atop the Championship, both ending the weekend on 116 points. However, courtesy of having seven wins to the Spaniard's six, it was the German ace who headed to Japan at the head of the title hunt. Behind, the battle for third had also intensified, with Giancarlo Fisichella having moved a point ahead of Felipe Massa.

In the Constructors Championship Renault had moved back to the head of the pack, albeit by just a point after their double podium in China. Ferrari had been forced to make way for them, and could potentially concede the title fight in Japan, if Renault claimed a one-two and the Scuderia failed to score. Behind, McLaren-Mercedes would claim third in the Championship if Honda failed to outscore them by ten points in Suzuka, while BMW Sauber had eased away from Toyota in fifth.

The full entry list for the 2006 Japanese Grand Prix is outlined below:

The full qualifying results for the 2006 Japanese Grand Prix are outlined below:

The full results for the 2006 Japanese Grand Prix are outlined below:

Victory for Fernando Alonso, combined with Michael Schumacher's engine failure had resulted in the Spaniard holding a commanding lead in the Drivers' Championship ahead of the season finale. Indeed, the Spaniard would claim the title if he scored just a single point in Brazil, or if Schumacher failed to win. In contrast, Schumacher would have to win the race and see Alonso fail to score, and then would only take the title by virtue of having one more race win than the Spaniard.

In the Constructors Championship it was Renault who held the advantage heading into the season finale, having left Japan on 195 points. That meant that they were nine clear of Ferrari in second, and hence only had to pick-up ten points in Brazil to successfully defend their title. Elsewhere, McLaren-Mercedes were confirmed in third ahead of Honda, with the fight to complete the top five between BMW Sauber and Toyota the only other area of interest.

Retrieved from "https://f1.fandom.com/wiki/2006_Japanese_Grand_Prix?oldid=87971"
Community content is available under CC-BY-SA unless otherwise noted.