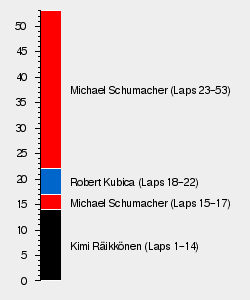 The 2006 Italian Grand Prix, officially the LXXVII Gran Premio Vodafone d'Italia, was race number fifteen of the 2006 FIA Formula One World Championship, which took place at the Autodromo Nazionale Monza in Monza, Italy, on 10 September 2006.[1] The race would see Michael Schumacher claim an emotional 90th race victory for Ferrari on home soil, on the day that he announced his retirement from F1.[1]

The German ace would not have it all his own way, however, for Kimi Räikkönen would beat him to pole position during qualifying, albeit by just 0.002s.[1] Nick Heidfeld was a surprise third for BMW Sauber ahead of Felipe Massa, as Championship leader Fernando Alonso could only muster tenth after being penalised for impeding Massa.[1]

Räikkönen made the best getaway at the start of the race, easing clear as Schumacher came under attack from Heidfeld.[1] The #5 Ferrari ultimately emerged ahead, while Heidfeld, who had to back off in the middle of the Rettifilo chicane, would slip down the field during the opening lap.[1]

Instead, it was his rookie teammate Robert Kubica who emerged in third, having rocketed up from sixth on the grid.[1] He led Massa, Heidfeld and Jenson Button, while Alonso made some minor progress to climb to seventh.[1]

The race soon developed into a procession, with Schumacher unable to challenge Räikkönen due to the McLaren-Mercedes' superior top speed.[1] Kubica would run in an increasingly lonely third, just ahead of Massa, while Button and Alonso both passed Heidfeld, but the Spaniard could not find a way past the #12 Honda.[1]

The order remained stable until the first round of stops, where Schumacher stayed out an additional lap on low fuel and jumped Räikkönen after delivering two fastest sectors.[1] Kubica remained a lonely third, while Rubens Barrichello and Giancarlo Fisichella moved into the lead group by virtue of conducting one-stop, rather that two-stop strategies.[1] Heidfeld would also make ground by jumping back ahead of Massa and Button, Alonso having jumped both as well, but was quickly slapped with a drive through penalty for speeding in the pitlane.[1]

Due to the variety of strategies and similar top speeds there would be little change to the order until the final (or in some cases only) round of stops were concluded.[1] This time Alonso would jump into third ahead of Kubica, and set about destroying the gap to Schumacher and Räikkönen ahead, with the Finn staying a couple of seconds behind the Ferrari.[1]

Yet, Alonso would push too hard, resulting in his Renault engine blowing itself apart with ten laps to go.[1] That effectively removed the last outlier in the race, for the rest of the field was too far spread apart to produce any late battles.[1]

As a result, Schumacher was left to claim an emotional victory, and move to within two points of Alonso in what was to be his last title battle.[1] Räikkönen claimed second ahead of Kubica, who claimed his and Poland's maiden podium finish, while Fisichella fended off Button to secure fourth.[1] Barrichello, Jarno Trulli and Heidfeld secured the remaining points, the latter duo running nose-to-tail with Massa on the final tour.[1]

The race was also notable as the first trial for the FIA's new High Speed Barrier system, which was designed to absorb higher energy impacts, without deflecting cars back onto the circuit.[2] The race would also be the last for Christian Klien until the 2010 Singapore Grand Prix.

Fernando Alonso had managed to extend his lead in the Championship as a result of the Turkish Grand Prix, leaving as the winner of another straight duel with main title rival Michael Schumacher. Indeed, the Spaniard headed to Italy with a twelve point margin over the German ace, with those two over thirty points clear of Felipe Massa in third. The Brazilian himself had opened a ten point gap over Giancarlo Fisichella in the fight for third, with Kimi Räikkönen a further three behind.

In the Constructors Championship Ferrari had done a lot of damage to Renaults lead, leaving Turkey just two points behind heading to their home race. Momentum suggested that the Scuderia would overhaul the French manufacturer in front of the loyal tifosi, and had looked stronger on power based circuits throughout the campaign. Elsewhere, McLaren-Mercedes were still mathematically in the title battle by a single point, but would require four straight one-two finishes, and see neither Renault nor Ferrari score for the rest of the season.

The full entry list for the 2006 Italian Grand Prix is outlined below:

The full qualifying results for the 2006 Italian Grand Prix are outlined below:

The full results for the 2006 Italian Grand Prix are outlined below:

Victory for Michael Schumacher in front of the tifosi had completely changed the Championship picture, for the German ace had eliminated Fernando Alonso's lead. Indeed, the Spaniard had seen his twelve point advantage demolished to just two after Schumacher's win and his engine failure, with those two now the only title contenders. Behind, Felipe Massa had retained third, although both Kimi Räikkönen and Giancarlo Fisichella had closed to within five points of the Brazilian.

In the Constructors Championship it had been a very good home race for Ferrari, as they moved ahead of Renault for the first time all season. The Scuderia established a three point lead over the French manufacturer, with those two officially in a duel for the title much like their lead drivers. Behind, McLaren-Mercedes had almost secured third ahead of Honda, who likewise had a healthy lead over fifth placed BMW Sauber.