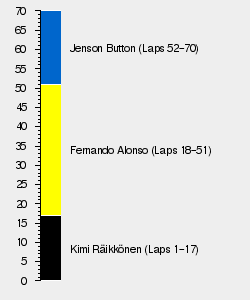 The 2006 Hungarian Grand Prix, otherwise advertised as the XXII Shell Magyar Nagydíj, was the thirteenth round of the 2006 FIA Formula One World Championship, held at the Hungaroring near Budapest, Hungary, on 6 August 2006.[1] Run in changeable conditions, the race would see Jenson Button secure his maiden F1 victory for Honda, which was also their first win as a constructor since John Surtees won the 1967 Italian Grand Prix.[1]

Qualifying had seen Kimi Räikkönen sweep to pole position ahead of Felipe Massa, while Button would share the second row with teammate Rubens Barrichello, only to be dumped down to fourteenth by an engine penalty.[1] Elsewhere, Championship leader Fernando Alonso would only muster fifteenth after getting slapped with a time penalty, while his main rival Michael Schumacher would start from twelfth.[1]

Ahead of the race there would be a series of heavy downpours, one of which came in the midst of the GP2 Series support race.[1] As such, the circuit would be soaked as the F1 field lined up on the grid, although most teams believed that the Hungaroring would dry up fairly quickly.[1]

The start saw Räikkönen slither away cleanly to claim an early lead, while Massa was instantly jumped by Pedro de la Rosa in the second McLaren-Mercedes.[1] His Ferrari predecessor Barrichello would also sweep past the #6 Ferrari, before slithering around the outside of de la Rosa to secure second.[1]

At the back, meanwhile, Schumacher, Alonso and Button would all make excellent progress, with Schumacher and Alonso both sprinting into the top ten.[1] Schumacher duly eased past Giancarlo Fisichella and then Massa to secure fourth before the end of the opening tour, while Alonso moved into sixth behind Fisichella.[1]

A move on Fisichella a lap later left Alonso on Schumacher's tail, resulting in an enticing duel for fourth during the early stages, until Alonso danced his car around the outside of the Ferrari at turn seven.[1] Out front, Räikkönen would break clear from Barrichello and de la Rosa, while Button picked his way through to run behind the Renault/Ferrari fight.[1]

The rain returned with a vengeance on lap five, just as de la Rosa swept past Barrichello for second, resulting in those drivers who had started on intermediate tyres to dive into the pits.[1] However, the rain would quickly ease again and the circuit begin to dry once more, prompting McLaren to put de la Rosa onto inters when he stopped on lap sixteen.[1]

Räikkönen stopped for inters a lap later, relinquishing the lead to Alonso, while Schumacher had slipped behind Button in the midst of the downpour.[1] However, it was a misjudged move to defend from Fisichella that would end the German veteran's bid for victory, sliding into the back of the #2 Renault to remove his own front wing.[1]

Six laps later and the fate of the race changed again, for second placed Räikkönen would misjudge a move on a lapped Vitantonio Liuzzi and hence write his McLaren off on the side of the Toro Rosso-Cosworth.[1] That brought out the Safety Car and hence saw the majority of the field dive into the pits, resulting in Alonso retaining the lead ahead of non-stopper Button.[1]

The restart saw the #1 Renault ease clear of the #12 Honda, aided by the fact that Button would get caught out by former teammate Takuma Sato.[1] However, with the circuit beginning to dry the Honda's Bridgestone tyres began to come into play, result in the Honda demolishing Alonso's eight second advantage.[1]

Slicks came into play on lap 51 as Barrichello became the first of the leaders to swap to them, prompting Alonso to pit for them a lap later.[1] However, a failure on his way out of the pits would end the Spaniard's race, and hence hand the advantage to Button, albeit with Schumacher closing in.[1]

Yet, Schumacher's sprint would come too soon, and hence resulted in his pace collapsing in the closing stages having remained on inters.[1] Button would therefore be left on his own at the head of the field, and eased away to claim victory by half a minute from de la Rosa.[1]

Nick Heidfeld would complete the podium after surviving a clash of wheels with Schumacher, and incident that resulted in the #5 Ferrari retiring.[1] Barrichello hence inherited fourth ahead of David Coulthard, with Ralf Schumacher, Felipe Massa and Schumacher claiming the remaining points.[1] Debutante Robert Kubica had initially been classified in seventh, but was disqualified from the race after his car was found to be 2kg underweight.[1]

Victory for Michael Schumacher, combined with a lowly fifth place finish for Fernando Alonso, had drastically changed the Championship picture with six rounds to go. Indeed, the German veteran had cut the gap to just eleven points between himself and the Spaniard out-front, and had momentum behind him. Alonso did, however, still have enough of a margin that he would lead the Championship heading into the summer-break after the Hungarian Grand Prix, but needed a drastic reversal in form.

In the Constructors Championship Ferrari had moved to within striking distance of Renault for the first time all season, leaving Germany just ten behind the leaders. Indeed, two one-twos in three races had done the damage for the Scuderia, and had moved them 62 points clear of third placed McLaren-Mercedes. The rest of the season would therefore likely be a duel between Renault and Ferrari for the crown, while McLaren were set to consolidate third, 40 clear of Honda in fourth.

The full entry list for the 2006 Hungarian Grand Prix is outlined below:

The full qualifying results for the 2006 Hungarian Grand Prix are outlined below:

The full results for the 2006 Hungarian Grand Prix are outlined below:

Heading into the Summer break it was Fernando Alonso who led the title hunt, holding a ten point lead at the head of the field. Michael Schumacher had closed to within a race's worth of points as a result of the Hungarian Grand Prix, as those two set about duelling for the title for the rest of the season. Behind, a three-way fight for third was likewise set to rumble for the rest of the season, with Felipe Massa, Giancarlo Fisichella and Kimi Räikkönen separated by just a single point.

Renault led the charge in the Constructors Championship as the field took three weeks off, heading Ferrari by seven points. Indeed, a strong run since the North American tour had allowed the Scuderia to all but eliminate the French manufacturer's lead, and hence meant they had momentum heading into the final phase of the season. Behind, McLaren-Mercedes were set to finish a distant third, albeit facing a potential, if remote, challenge from Honda after Jenson Button's breakthrough win.