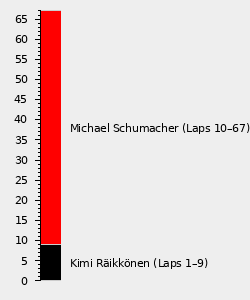 The 2006 German Grand Prix, formally known as the Formula 1 Grosser Mobil 1 Preis von Deutschland 2006, was the twelfth round of the 2006 FIA Formula One World Championship, staged on 30 July 2006 at the Hockenheimring in Baden-Württemberg, Germany.[1] The race would see Michael Schumacher secure his third straight victory to close the gap to Championship leader Fernando Alonso.[1]

There had been some controversy prior to the race weekend, with the damper suspension system on the Renaults deemed legal by the scrutineers and stewards, despite an official ban on the design by the FIA.[1] The FIA, who had appointed the stewards, appealed against the decision, prompting Renault to withdraw the design at the end of Friday's running to avoid a ban.[1]

The impact of that change in design seemed to tell in qualifying, for Giancarlo Fisichella and Alonso could only muster fifth and seventh on the grid respectively.[1] That hence allowed Kimi Räikkönen to storm to pole position ahead of Michael Schumacher, while Felipe Massa and Jenson Button secured the second row.[1]

The start of the race would see Räikkönen ace his start, giving McLaren-Mercedes hope of a first win of the season.[1] Schumacher and Massa duly gave chase in the two scarlet Ferraris, while behind the two Renaults surged ahead of the two Hondas of Button and Rubens Barrichello.[1]

Lap one would prove more eventful beyond the start, however, for Button would dive back past Alonso at the hairpin, before Ralf Schumacher smacked David Coulthard in the middle of the pack.[1] The impact launched the Scot's Red Bull-Ferrari, and hence distracted the two BMW Saubers and resulted in them hitting each other, while Nico Rosberg would have an accident of his own entering the stadium section a few moments later.[1]

The early stages saw Räikkönen and the two Ferraris escape up the road, leaving Fisichella to unsuccessfully defend fourth from a resurgent Button.[1] However, after just ten laps the entire perception of the race would change, as Räikkönen swept into the pits for his first stop.[1]

Indeed, Räikkönen's victory bid ended there, for not only had he made an early stop, a sticking wheel nut would mean his stop lasted over fifteen seconds.[1] That dumped the Finn back to eighth, and as the only member of the lead group to be on a three-stop strategy.[1]

The rest of the field began making their stops a few laps later, with Button the first of the Honda/Renault quartet to stop, while Massa pitted before Schumacher.[1] The two Ferraris duly rejoined in first and second, Schumacher remaining ahead, while Mark Webber suddenly found himself in the middle of the fight for the podium with Räikkönen, Button and Fisichella.[1]

Through to the second round of stops and Webber was still in the hunt, and had enhanced his hopes by overtaking Fisichella.[1] Unfortunately for the Australian racer his challenge was ended by water leak in the closing stages, leaving Button to fend off Räikkönen for the final spot on the podium.[1] Fisichella, meanwhile, would slip out of the fight, and be passed by teammate Alonso during their final stops.[1]

Out front, meanwhile, Schumacher and Massa ran nose-to-tail and unopposed at the head of the field, and duly crossed the line to claim a dominant one-two for Ferrari.[1] Räikkönen would join them on the podium after an excellent dive past Button at the Mercedes grandstand in the closing stages, while Alonso secured fifth ahead of Fisichella.[1] Jarno Trulli and Christian Klien completed the scorers, with ten drivers having retired.[1]

Significantly the race proved to be the last for 1997 Champion Jacques Villeneuve, who quit BMW Sauber after the race having not been given a contract for 2007.[2] Elsewhere, Midland-Toyota saw both their cars disqualified for using illegally flexing rear wings.[1]

Victory for Michael Schumacher meant that the German veteran had managed to close the gap to Championship leader Fernando Alonso, leaving France with a seventeen point deficit. Alonso's second place finish had reduced the damage, however, and meant that the Spaniard could afford to finish second to Schumacher through the remaining seven races and still claim the crown. Behind, Giancarlo Fisichella and Kimi Räikkönen were in a fight with Felipe Massa to secure third, while Pedro de la Rosa had become the season's eighteenth different scorer.

In the Constructors Championship Renault had left their home race still at the head of the hunt, but had seen their advantage somewhat reduced. Indeed, Ferrari's double podium ensured the Scuderia closed to within 21 points of the French manufacturer, and hence were a significant threat for the crown. McLaren-Mercedes, meanwhile, were set to claim third having dropped 50 points behind Ferrari, with Honda and Toyota completing the top five.

The full entry list for the 2006 German Grand Prix is outlined below:

The full qualifying results for the 2006 German Grand Prix are outlined below:

The full results for the 2006 German Grand Prix are outlined below:

Victory for Michael Schumacher, combined with a lowly fifth place finish for Fernando Alonso, had drastically changed the Championship picture with six rounds to go. Indeed, the German veteran had cut the gap to just eleven points between himself and the Spaniard out-front, and had momentum behind him. Alonso did, however, still have enough of a margin that he would lead the Championship heading into the summer-break after the Hungarian Grand Prix, but needed a drastic reversal in form.

In the Constructors Championship Ferrari had moved to within striking distance of Renault for the first time all season, leaving Germany just ten behind the leaders. Indeed, two one-twos in three races had done the damage for the Scuderia, and had moved them 62 points clear of third placed McLaren-Mercedes. The rest of the season would therefore likely be a duel between Renault and Ferrari for the crown, while McLaren were set to consolidate third, 40 clear of Honda in fourth.