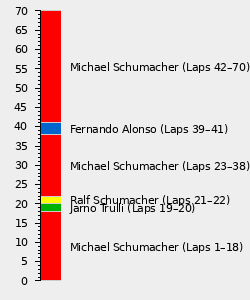 The 2006 French Grand Prix, otherwise known as the Formula 1 Grand Prix de France 2006, was the eleventh round of the 2006 FIA Formula One World Championship, staged at the Circuit de Nevers Magny-Cours in Magny-Cours, France, on 16 July 2006.[1] The race would see Michael Schumacher claim a record breaking eighth victory at the French Grand Prix, and secure his 22nd career Hattrick.[1]

Qualifying had seen Schumacher continue his dominant form from the US Grand Prix, sweeping to his 68th career pole position.[1] Teammate Felipe Massa joined him on the front row, while Championship leader Fernando Alonso would start from third for Renault.[1]

Schumacher duly aced his start to claim an early lead, while Massa moved across the prevent Alonso from diving through to claim second.[1] Behind it was a similarly tame start, with Takuma Sato the only casualty as his Super Aguri-Honda broke its gearbox shortly after the start.[1]

With Massa in second and defending heavily from Alonso, Schumacher was able to escape up the road in the early stages, setting a succession of fastest laps.[1] Behind, the two Toyotas found themselves defending from Kimi Räikkönen, while Pedro de la Rosa and Mark Webber were in an intense duel for eighth.[1] At the back, meanwhile, Tiago Monteiro would exit the race in somewhat spectacular fashion, smashing into a kerb at the chicane with enough force to pitch the Midland-Toyota into the air.[1]

Unfortunately after those early exchanges the race would soon develop into a procession, largely due to a combination of the 2006 spec-cars and the Magny-Cours circuit.[1] Indeed, it was only when the first round of stops began that the order was significantly changed, albeit briefly as Jarno Trulli inherited the lead before making his first stop.[1]

However, once the stops were completed the race would settle down again, resulting in another tepid spell.[1] In the midst of that Renault would issue a press release regarding the political state of F1, which drew more attention than the on-track action.[1]

It was at this point that strategy came into play, however, as several drivers made their second stops early, the signal that they were on a three-stop plan.[1] The most significant of these was Massa, who relinquished second to Alonso as a result of making an additional stop.[1]

Massa's only hope of getting back ahead of Alonso was that he would be on low fuel for the foreseeable future, with the Spaniard would take on more fuel when he made his second and final stop.[1] Yet, without Massa in front of him the Spaniard was able to build a fair gap either side of his stop, and so would reclaim a safe second when Massa completed his second stop.[1]

Untroubled by all of this, however, was race leader Schumacher, who cruised through the second half of the race to secure his 88th career victory, ten seconds clear of Alonso.[1] Massa finished a distant third ahead of Ralf Schumacher, with Räikkönen, Giancarlo Fisichella, de la Rosa and Nick Heidfeld.[1]

Notably the 2006 French Grand Prix would see Schumacher claim his 68th and final pole position, a record tally that would stand until Lewis Hamilton claimed his 69th pole at the 2017 Italian Grand Prix.

For the first time in 2006 Fernando Alonso had failed to finish in the top two in the Championship, and hence had seen his title lead reduced. However, the Spaniard had still scored points, and so the damage done to his lead by race winner Michael Schumacher had been minimal, the German ace only closing the gap to nineteen points. Behind, Giancarlo Fisichella had moved ahead of Kimi Räikkönen after the Finn's retirement, while Felipe Massa had gained ground on both in fifth.

In the Constructors Championship the US Grand Prix had been a hugely beneficial day for Ferrari, who closed the gap to the leaders and broke through the 100 point barrier. However, the Scuderia would remain 26 points behind Renault at the end of the weekend, and had therefore only really enhanced their grip on second. Indeed, a double non-score for McLaren-Mercedes had left them in a now distant third, while Toro Rosso-Cosworth were on the board for the first time in ninth.

The full entry list for the 2006 French Grand Prix is outlined below:

The full qualifying results for the 2006 French Grand Prix are outlined below:

The full results for the 2006 French Grand Prix are outlined below:

Victory for Michael Schumacher meant that the German veteran had managed to close the gap to Championship leader Fernando Alonso, leaving France with a seventeen point deficit. Alonso's second place finish had reduced the damage, however, and meant that the Spaniard could afford to finish second to Schumacher through the remaining seven races and still claim the crown. Behind, Giancarlo Fisichella and Kimi Räikkönen were in a fight with Felipe Massa to secure third, while Pedro de la Rosa had become the season's eighteenth different scorer.

In the Constructors Championship Renault had left their home race still at the head of the hunt, but had seen their advantage somewhat reduced. Indeed, Ferrari's double podium ensured the Scuderia closed to within 21 points of the French manufacturer, and hence were a significant threat for the crown. McLaren-Mercedes, meanwhile, were set to claim third having dropped 50 points behind Ferrari, with Honda and Toyota completing the top five.