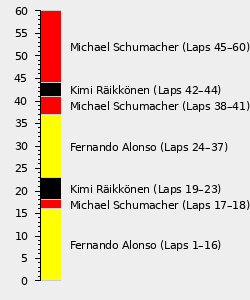 The 2006 European Grand Prix, otherwise known as the L Grand Prix of Europe was the fifth round of the 2006 FIA Formula One World Championship, staged at the Nürburgring in Nürburg, Germany, on 7 May 2006.[1] The race would see Michael Schumacher claim his second victory in a row, beating Championship leader Fernando Alonso.[1]

Qualifying would see a red flag glitch cause some confusion, and resulted in Christian Klien dropping out on Q1, much to the Austrian racer's ire.[1] However, it would not affect those fighting for pole position, a battle which was won by Alonso in Q3 by 0.097s over Schumacher.[1]

It was status quo at the start of the race, with Alonso easing clear of Schumacher into the first corner, who instead had to keep an eye on his young Ferrari teammate Felipe Massa.[1] The Brazilian racer ultimately opted against making a lunge at his teammate, and instead fended off a move from a fast starting Jenson Button, who had leapt ahead of Rubens Barrichello and Kimi Räikkönen off the grid.[1]

Behind, however, there would be yet another first corner crash, as David Coulthard and Vitantonio Liuzzi collided in the sister Red Bull-Ferrari and Toro Rosso-Cosworth cars.[1] Replays subsequently showed that Liuzzi had been spun into the side of Coulthard's Red Bull by Ralf Schumacher in the Toyota, although regardless both Red Bull liveried cars would suffer terminal damage.[1]

Liuzzi's spin into the gravel at the chicane with a smashed rear wing while limping back to the pits brought out the Safety Car, which stayed out for two laps.[1] The restart saw Alonso blast away at the start of lap four to claim an early lead ahead of the scarlet Ferraris, while Räikkönen eased past Button for fourth.[1]

The race quickly settled down, with Alonso, Schumacher, Massa and Räikkönen entering a stalemate a few seconds apart, while Button dropped back towards Juan Pablo Montoya.[1] Indeed, the monotony was only broken up when Alonso triggered the first round of stops on lap sixteen, followed on successive laps by Massa and Schumacher.[1]

Räikkönen ran on in the lead until lap 23, while Nico Rosberg ran longest out of everyone, going on past half-distance.[1] Yet, the German rookie would not affect the order out front, with Alonso continuing to lead ahead of Schumacher, who were exchanging barrages of fastest laps as they eased away from Massa and Räikkönen throughout the second stint.[1]

Their fight came to its apex when Alonso dived in for his second stop, releasing Schumacher for a three-lap burst in clear air.[1] That, ultimately, proved to be the difference, for two fastest laps and a seven second stop ensured that the #5 Ferrari shot out of the pitlane just ahead of the #1 Renault.[1]

With that the battle for the lead was over, for Alonso's attempt to get back on terms with the scarlet Ferrari would collapse along with his pace.[1] Schumacher was hence left to win at a canter, while the Spaniard had to keep an eye on his mirrors for the ongoing battle between Massa and Räikkönen that was steadily catching him.[1]

Fortunately for Alonso those two would run out of time to catch the Renault, as Schumacher collected a deceptively simple victory three seconds clear of Alonso.[1] Massa duly completed the podium as Räikkönen could not force a move, while Barrichello recovered to fifth after his dismal start.[1] Fisichella was next ahead of Rosberg on his ambitious strategy, the German youth having started from last place on the grid, while Jacques Villeneuve completed the scorers.[1]

Fernando Alonso had seen his lead at the top of the Championship once again grow as a result of the San Marino Grand Prix, leaving Imola with a fifteen point advantage. Race winner Michael Schumacher had, however, moved into second courtesy of his victory, three ahead of third placed Kimi Räikkönen. Giancarlo Fisichella and Juan Pablo Montoya were a further three behind the Finn, while Jenson Button had slipped to sixth, two points off.

In the Constructors Championship Renault had seen their lead slightly reduced, although they still held a very healthy eighteen point margin. McLaren-Mercedes had hence inched closer to their opponents in second, although a strong weekend for Ferrari had seen the Scuderia double their tally, and move to within three points of the Anglo-German alliance. Honda were next, with half the points of Ferrari, while BMW Sauber rounded out the top five.

The full entry list for the 2006 European Grand Prix is outlined below:

The full qualifying results for the 2006 European Grand Prix are outlined below:

The full results for the 2006 European Grand Prix are outlined below:

Fernando Alonso had seen his early Championship lead chipped away at as a result of the European Grand Prix, leaving the Nürburgring with a thirteen point advantage. Michael Schumacher had been the man to do the damage, his second win of the season leaving him on 31 points and in a clear second place. Kimi Räikkönen had hence lost ground in third but remained five ahead of Giancarlo Fisichella, while Felipe Massa moved into the top five, level on points with Juan Pablo Montoya.

In the Constructors Championship Ferrari had managed to take another point out of Renault's early lead, although the French squad still held a decent margin. Indeed, Renault left Germany with a fourteen point lead over the Scuderia, while third placed McLaren-Mercedes were a further six behind. Honda, meanwhile, had enhanced their grip on fourth ahead of BMW Sauber, with Williams-Cosworth, Toyota and Red Bull-Ferrari the only other scorers.