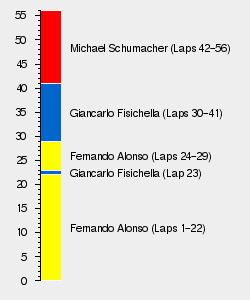 The 2006 Chinese Grand Prix, formally the 2006 Formula 1 Sinopec Chinese Grand Prix (2006中石化中国大奖赛 or alternately 2006 Zhōngshíhuà zhōngguó dàjiǎng sài in Chinese) was the sixteenth round of the 2006 FIA Formula One World Championship, staged at the Shanghai International Circuit in Shanghai, China, on 1 October 2006.[1] The race would be notable as the 91st and final victory for Michael Schumacher, and would move the German ace to the top of the 2006 Drivers' Championship.[1]

Qualifying had not suggested it would be a good race for Schumacher, however, for the German ace could only muster sixth on the grid for Ferrari.[1] Instead, it was Championship leader Fernando Alonso who emerged on pole position, setting the fastest time in all three qualifying sessions ahead of teammate Giancarlo Fisichella.[1]

Heavy rain on race morning meant that the circuit was very damp ahead of the start and hence meant that the field started on intermediates.[1] This favoured the Michelin shod drivers in the field, and hence would put those on Bridgestones on the back foot.[1]

Alonso duly aced the start to claim an early lead, sprinting ahead of Renault teammate Fisichella who eased into the first corner to allow Alonso to escape.[1] Behind, Jenson Button initially managed to fend off the attentions of Kimi Räikkönen, while Robert Kubica was barged off the track by Robert Doornbos in the #15 Red Bull-Ferrari.[1]

The race quickly settled down, with Schumacher the main source of entertainment as he battled his way pas the two Hondas of Rubens Barrichello and Button.[1] Räikkönen would also make progress by diving past Fisichella, who had been defending heavily from the Finn since the opening lap, and duly went about demolishing Alonso's fifteen second lead.[1]

After fifteen laps the circuit was showing signs of having a dry line, a fact which enabled those on Bridgestone tyres to come to the fore.[1] As such there was little surprise when Schumacher closed right onto Fisichella's tail, while Räikkönen was on the verge of catching Alonso, until a throttle failure ended his challenge.[1]

The top three made their first pitstops on consecutive laps, beginning with Schumacher and ending with Fisichella on lap 23.[1] Interestingly both Fisichella and Schumacher would stick with the same set of intermediate tyres, while Alonso opted to have just his front tyres changed for a new set of inters.[1]

That, however, would unbalance the #1 Renault, which was steadily reeled in by both Fisichella and Schumacher during the second stint.[1] By lap 29 Fisichella was on the attack and after a failed attempt into the hairpin claimed the lead, with Schumacher following the Italian racer through.[1]

Alonso opted to switch to slicks a few laps later, although lost even more time courtesy of a sticking wheel nut.[1] Fisichella and Schumacher, meanwhile, would be among the last to switch to slicks, with Fisichella paying the price for cold tyres by sliding wide at the first corner and handing the lead to the German ace.[1]

With that Schumacher was away, with Fisichella dutifully allowing a recovering Alonso to pass for second without issue.[1] The Spaniard quickly blasted away to hunt down Schumacher, although time was fast running out as the race entered its final throes.[1]

Ultimately, time would run out for Alonso, who succession of fastest laps was not enough to catch Schumacher, who claimed his 91st victory and the Championship lead.[1] Fisichella was a distant third to complete the podium, with Button, Pedro de la Rosa, Barrichello, Nick Heidfeld and Mark Webber claimed the remaining points.[1]

Victory for Michael Schumacher in front of the tifosi had completely changed the Championship picture, for the German ace had eliminated Fernando Alonso's lead. Indeed, the Spaniard had seen his twelve point advantage demolished to just two after Schumacher's win and his engine failure, with those two now the only title contenders. Behind, Felipe Massa had retained third, although both Kimi Räikkönen and Giancarlo Fisichella had closed to within five points of the Brazilian.

In the Constructors Championship it had been a very good home race for Ferrari, as they moved ahead of Renault for the first time all season. The Scuderia established a three point lead over the French manufacturer, with those two officially in a duel for the title much like their lead drivers. Behind, McLaren-Mercedes had almost secured third ahead of Honda, who likewise had a healthy lead over fifth placed BMW Sauber.

The full entry list for the 2006 Chinese Grand Prix is outlined below:

The full qualifying results for the 2006 Chinese Grand Prix are outlined below:

The full results for the 2006 Chinese Grand Prix are outlined below:

A second victory in succession for Michael Schumacher had moved the German ace level on points with long-standing leader Fernando Alonso atop the Championship, both ending the weekend on 116 points. However, courtesy of having seven wins to the Spaniard's six, it was the German ace who headed to Japan at the head of the title hunt. Behind, the battle for third had also intensified, with Giancarlo Fisichella having moved a point ahead of Felipe Massa.

In the Constructors Championship Renault had moved back to the head of the pack, albeit by just a point after their double podium in China. Ferrari had been forced to make way for them, and could potentially concede the title fight in Japan, if Renault claimed a one-two and the Scuderia failed to score. Behind, McLaren-Mercedes would claim third in the Championship if Honda failed to outscore them by ten points in Suzuka, while BMW Sauber had eased away from Toyota in fifth.