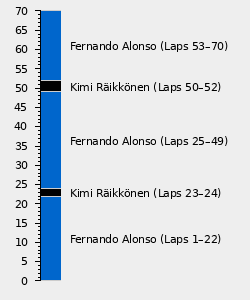 The 2006 Canadian Grand Prix, otherwise known as the XLIV Grand Prix du Canada, was the ninth round of the 2006 FIA Formula One World Championship, held at the Circuit Gilles Villeneuve in Montreal, Canada, on 25 June 2006.[1] The race, which marked the halfway point in the 2006 season, would see Fernando Alonso sweep to his sixth victory of the campaign.[1]

For the second race in succession the Spanish ace had dominated qualifying, topping all three sessions en-route to his fifth straight pole position.[1] His teammate Giancarlo Fisichella would complete the front row ahead of Kimi Räikkönen, while rookie racer Nico Rosberg was a standout name, claiming sixth for Williams-Cosworth.[1]

The start of the race was expected to see some formation flying from the two Renaults, only for Fisichella to slightly creep forward before the lights went out.[1] That hence allowed Räikkönen to immediately charge past him as the Italian hit the brakes as the lights went out, and would result in a drive-through penalty later in the race.[1]

Otherwise it would be a clean start to the race, with Alonso establishing an early lead, while Michael Schumacher slipped behind Rosberg and Juan Pablo Montoya.[1] However, by the end of lap two the German ace would be back ahead of both the Williams and the McLaren-Mercedes, as a clash between the pair in turn three would result in the Safety Car making its way onto the circuit.[1]

Montoya had moved to dive past the Williams into the right-left chicane, and hence had his nose alongside the rear of Rosberg's Williams as they braked for the chicane.[1] Rosberg did not sense this and so steered across Montoya's path, with the resulting contact sending the Williams sliding straight into the outside wall, while Montoya limped to the pits for a new front wing.[1]

The restart saw Alonso try and sprint away from Räikkönen, while Fisichella quickly abandoned third after being slapped with a penalty for jumping the start.[1] Without Fisichella to challenge him the Finn was soon free to harass Alonso, with the #3 McLaren remaining tucked under the #1 Renault's rear wing throughout the early stages.[1]

Their fight, which saw Räikkönen almost snatch the lead with a lunge at the final chicane on lap twelve, would continue through to the first round of stops, with Alonso stopping first.[1] Räikkönen hence made his bid for victory by completing two hot laps in clear air, only for an issue on the right-rear wheel during his stop to undo his hard work and drop him back behind the Renault.[1]

That appeared to be that for Räikkönen's victory bid, for the Finn would continue to drift away from the back of Alonso throughout the second stint.[1] Indeed, the second round of stops would prove even more disastrous for Räikkönen, as he not only spun on his in-lap, but had an anti-stall when trying to leave his pitbox.[1]

With ten laps to go the race looked to be sown up in Alonso's favour, until the safety car made its second appearance of the race.[1] The cause this time was Jacques Villeneuve, who had got caught out by a limping Ralf Schumacher and ended up smashing his BMW Sauber into the wall.[1]

However, Alonso was not to be beaten, and duly aced the restart to claim an early lead aided by the fact that the lapped Jarno Trulli and Nick Heidfeld between himself and Räikkönen.[1] The Finn would hence lose valuable time lapping the errant duo, before a mistake at the final chicane allowed Michael Schumacher to sweep past.[1]

With that the race was over, with Alonso easing away to claim victory and enhance his already substantial Championship lead.[1] Schumacher and Räikkönen completed the podium as they limited the damage to their title bids, while Fisichella recovered to fourth ahead of Felipe Massa, Trulli, Heidfeld and David Coulthard.[1]

The full entry list for the 2006 Canadian Grand Prix is outlined below:

The full qualifying results for the 2006 Canadian Grand Prix are outlined below:

The full results for the 2006 Canadian Grand Prix are outlined below:

At the halfway point in the 2006 FIA Formula One World Championship it was clear that Fernando Alonso was the overwhelming favourite to retain his title, having dropped just six points across the opening nine rounds. He left Canada with a huge 25 point lead over Michael Schumacher in second, and a 45 point advantage over Kimi Räikkönen in third. The half-term top five was then completed by Giancarlo Fisichella and Felipe Massa, with sixteen drivers having scored.

In the Constructors Championship it was Renault who had command at the halfway mark, leaving Canada with 121 points and seven wins to their credit. Ferrari were their closest challengers and the only other team to have claimed a race win, but faced a 34 point gap between themselves and the French squad. McLaren-Mercedes were likewise a distant third, well clear of fourth placed Honda, with BMW Sauber rounding out the mid-season top five.