Formula 1 Wiki
Register
Don't have an account?
Sign In
Advertisement
in: 2006 Grands Prix, British Grand Prix, Formula One races in the United Kingdom 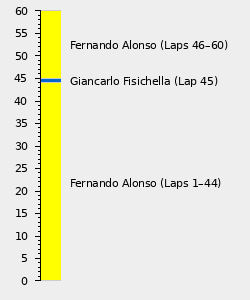 The 2006 British Grand Prix, otherwise advertised as the LIX Foster's British Grand Prix, was the eighth round of the 2006 FIA Formula One World Championship, staged at the Silverstone Circuit in Northamptonshire, UK, on 11 June 2006.[1] The race would see Fernando Alonso narrowly miss-out on a maiden Grand Chelem, having claimed pole position, fastest lap and victory, and led all bar one lap.[1]

It would prove to be Alonso's weekend right from the start, with the Spaniard becoming the first driver to top all three qualifying sessions on Saturday.[1] He duly claimed pole by 0.630s, with title rivals Kimi Räikkönen and Michael Schumacher lining up in second and third respectively.[1]

The start of the race would give Alonso's challengers hope, however, for the #1 Renault was surprisingly sluggish off the line.[1] Yet, neither Räikkönen nor Schumacher could force a move into Copse, meaning Alonso was able to retain his spot at the head of the field.[1] Behind, Juan Pablo Montoya received a whack from Jacques Villeneuve as the only incident of note in the first corner.[1]

However, a few moments later and a more costly accident would thin the field, caused by Scott Speed misjudging his speed through Becketts.[1] The American rookie smacked into the back of Ralf Schumacher's Toyota with enough force to send the German racer sliding off the circuit, only for Schumacher to rejoin and collect an innocent Mark Webber.[1]

The Safety Car was required to clean up the mess, with Schumacher and Webber out, while Speed pitted for repairs but was forced to retire.[1] At the start of the race the race would resume, with Alonso slowing dramatically towards the end of the SC period before catapulting away from Räikkönen to build an early lead.[1]

With Alonso breaking away attention briefly focused on Jenson Button, who was battling his way up the field at an impressive rate having crashed out in qualifying.[1] Indeed, a series of moves in the early laps carried the Brit from nineteenth to the back of eleventh placed David Coulthard, only for his Honda engine to coat his rear-tyres in oil and set fire to the car as he spun into the gravel at Brooklands.[1]

With that the race settled into a stalemate, with Alonso continuing to eek out a lead, while Räikkönen had Schumacher glued to his tail through to the first round of stops.[1] Schumacher was a surprise first stopper from the lead group, followed by Räikkönen a lap later, while Alonso ran on until lap 22 and managed to rejoin without losing the lead.[1]

The second stint of the race provided little action of note, with the gaps at the head of the field only growing as the summer heat kept any weather intervention at bay.[1] As such, it was only when the second round of stops began on lap 41 that the picture of the race changed, with Schumacher triggering the pit-phase.[1]

Indeed, Schumacher was the main winner of the second stop, emerging in clear air to deliver one flying lap, and hence jump Räikkönen out of the pits.[1] Alonso, meanwhile, would stop on lap 44 to hand the lead to teammate Giancarlo Fisichella, before the Italian stopped on lap 45 and rejoined in fourth behind Räikkönen.[1]

Fisichella was the main focus of attention in the closing stages, slowly drawing in Räikkönen for the final podium spot.[1] A similar battle would develop over the final point, Nico Rosberg drawing in Villeneuve, although both battles would end in disappointment, as track conditions, the Silverstone circuit and the current generation of cars made overtaking near impossible.[1]

Untroubled by all of this, however, was Alonso, who cruised through the final laps to claim his maiden Hattrick, fourteen seconds clear of Schumacher in second.[1] Räikkönen held Fisichella at bay to complete the podium, while Felipe Massa, Montoya, Nick Heidfeld and Villeneuve completed the scorers.[1]

The full entry list for the 2006 British Grand Prix is outlined below:

The full qualifying results for the 2006 British Grand Prix are outlined below:

The full results for the 2006 British Grand Prix are outlined below: