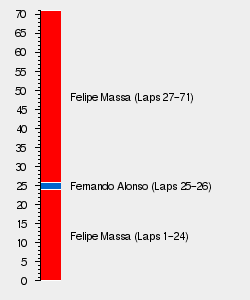 The 2006 Brazilian Grand Prix, officially the XXXV Grande Prêmio do Brasil, was race the eighteenth and final round of the 2006 FIA Formula One World Championship, staged at the Autódromo José Carlos Pace in São Paulo, Brazil, on 22 October 2006.[1] The race would see Felipe Massa claim a memorable victory on home soil, as Fernando Alonso finished second to secure his second Drivers' Championship.[1]

Ahead of the Brazilian Grand Prix the title picture was fairly clear, with Alonso only needing to score a single point to claim the crown. In contrast, main rival Michael Schumacher, who was set to start his last Grand Prix, would have to win the race outright, and see Alonso fail to score at all, to claim a record eighth World Championship.

However, both title contenders would lose out in qualifying, with Alonso claiming fourth while Schumacher was a seemingly disastrous tenth, having failed to set a time in Q3.[1] At the head of the field, meanwhile, it was home hero Massa who secured pole position, with Kimi Räikkönen completing the front row.[1]

The start of the race itself would see Massa ease into an early lead from Räikkönen, while Alonso fended off a challenge from Rubens Barrichello to hold fourth behind Jarno Trulli.[1] Schumacher, meanwhile, would make some early progress with a double move on the two BMW Saubers as well as Barrichello, although the race was quickly brought under control by the Safety Car.[1]

The cause was a clash between the two Williams-Cosworths, with Nico Rosberg punting Mark Webber out of the race at turn four, before suffering a heavy accident of his own at the end of the lap.[1] Both would emerge from their ruined Williams unhurt, with the safety car staying out until the end of lap five.[1]

Massa aced the restart to claim a small lead, as teammate Schumacher found Giancarlo Fisichella in a very defensive mood in their fight for fifth.[1] Indeed, their duel would be ferocious in the laps after the start, and would ultimately resulted in Schumacher making an aggressive lunge around the outside of turn one, squeezing Fisichella onto the kerb.[1]

The kerb naturally pushed Fisichella's car back into the path of the #5 Ferrari, with the Italian racer's front wing slicing into the side of Schumacher's left rear tyre.[1] The Bridgestone tyre steadily deflated over the rest of the lap, forcing Schumacher into the pits and almost costing him a full lap after making his stop.[1]

In danger of lapping his title pretending teammate Massa was instructed not to overtake his teammate, although they would exchange a barrage of fastest laps.[1] Behind, Räikkönen was in a lonely second ahead of Alonso, Trulli's race having been curtailed by a mechanical failure, with the order settling down ahead of the first round of stops.[1]

Those stops saw quick work from Renault get Alonso out ahead of Räikkönen, although the Spaniard was still a long way off the back of Massa.[1] Jenson Button would also get into the lead group, splitting Alonso from Räikkönen, while Schumacher would rocket up to thirteenth amid the stops, before picking his way into the top ten with a series of moves on rejoining drivers.[1]

The second round of stops allowed Schumacher to make more progress, putting him well into the top eight and within striking distance of fifth placed Fisichella.[1] The #5 Ferrari duly drafted onto the back of the #2 Renault, sparking another ferocious fight between the Italian and German racers.[1]

Ultimately it would take a mistake from Fisichella on lap 62 to let the Ferrari through, with Schumacher quickly charging clear to hunt down Räikkönen.[1] That would again lead to an intense duel between the veteran German and the Finn, who had signed to replace him at the Scuderia in 2007, and would end with a decisive lunge by Schumacher into the first corner.[1]

However, time would run out for Schumacher to make further progress, with teammate Massa sweeping across the line to claim an emotional win on home soil, the first for a Brazilian driver since Ayrton Senna won in 1993.[1] Alonso cruised through to claim second and his second straight World Championship title, while Button was little more than a footnote in third.[1] Schumacher was fourth ahead of Räikkönen, sixth place for Fisichella ensured Renault won the Constructors Championship, while Barrichella and Pedro de la Rosa secured the final points of the season.[1]

Victory for Fernando Alonso, combined with Michael Schumacher's engine failure had resulted in the Spaniard holding a commanding lead in the Drivers' Championship ahead of the season finale. Indeed, the Spaniard would claim the title if he scored just a single point in Brazil, or if Schumacher failed to win. In contrast, Schumacher would have to win the race and see Alonso fail to score, and then would only take the title by virtue of having one more race win than the Spaniard.

In the Constructors Championship it was Renault who held the advantage heading into the season finale, having left Japan on 195 points. That meant that they were nine clear of Ferrari in second, and hence only had to pick-up ten points in Brazil to successfully defend their title. Elsewhere, McLaren-Mercedes were confirmed in third ahead of Honda, with the fight to complete the top five between BMW Sauber and Toyota the only other area of interest.

The full entry list for the 2006 Brazilian Grand Prix is outlined below:

The full qualifying results for the 2006 Brazilian Grand Prix are outlined below:

The full results for the 2006 Brazilian Grand Prix are outlined below:

With that the 2006 FIA Formula One World Championship came to its conclusion, with Fernando Alonso declared as World Champion with 134 points and seven victories. Michael Schumacher ended the first phase of his F1 career with second place in the Championship on 121 points, having also claimed seven wins, while Felipe Massa ended his maiden Ferrari campaign in third with 80 points. Giancarlo Fisichella and Kimi Räikkönen would complete the top five, with nineteen drivers having scored.

In the Constructors Championship it was Renault whom ended the season as Champions, scoring eight wins and 206 points across the eighteen round season. Ferrari hence had to settle for second with 201 points, despite claiming one more win than the French manufacturer, while McLaren-Mercedes ended the season in a lonely third having failed to top the podium all season. Honda were next, and were the only other team to have claimed a race victory, with nine of teams having scored in 2006.