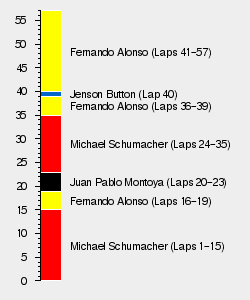 The 2006 Bahrain Grand Prix, officially the III Gulf Air Bahrain Grand Prix, was the opening round of the 2006 FIA Formula One World Championship, which took place at the Bahrain International Circuit on 12 March 2006.[1] The race would see defending World Champion Fernando Alonso open his title defence with victory, beating Michael Schumacher in a race long duel.[1]

The opening round of 2006 came after a very busy winter, which had included a major rulebook change and several new teams.[2] Out went the 3.0l V10 engine formula introduced in 1995 to be replaced by 2.4l V8s, new 7-speed gearboxes were implemented, and drivers were limited to fourteen sets of tyres for the race weekend, but could change tyres during pitstops.[2]

Elsewhere, BMW became a constructor and entrant in their own right, taking over the Sauber entry after buying a controlling stake in Peter Sauber's business.[3] Likewise, Honda took control of BAR to become a constructor in their own right, and would support a junior team in the form of Super Aguri.[3] Red Bull similarly formed a junior team after their purchase of Minardi, which became Toro Rosso for 2006, while Jordan became Midland.[3]

Driver-wise there would be one significant change, as Ferrari signed reserve driver Felipe Massa to take over their second seat, replacing Rubens Barrichello.[3] The Brazilian veteran moved to the factory Honda team to partner Jenson Button, with Takuma Sato moving to partner Yuji Ide at Super Aguri, while GP2 Series Champion Nico Rosberg, son of 1982 World Champion Keke Rosberg would make his debut with Williams-Cosworth.[3]

Into the race weekend itself and the field was faced with a new qualifying format, which was split into three sessions.[2] All 22 drivers would venture out in the first session to set as many flying laps as they could in fifteen minutes, before the bottom six drivers were eliminated.[2] Q2 would be a repeat with the next six slowest drivers eliminated, before the remaining ten progressed to Q3 to battle for pole position.[2]

The new quali-format saw several surprises, as a heavy accident for Kimi Räikkönen eliminating both himself and Ralf Schumacher in Q1.[3] Regardless, it was Michael Schumacher who emerged on pole ahead of new teammate Massa, while Button beat Alonso to third ahead of Juan Pablo Montoya.[3]

Alonso was the man to watch at the start, with the #1 Renault sprinting off the grid to claim second, managing to dodge a lunging Massa in the process.[1] Massa would hence slip behind the Spaniard, while Rosberg smacked into Nick Heidfeld in the middle of the pack, although both would continue.[1]

Out front, meanwhile, Schumacher would ease into an early lead, and would do his best to escape during the early stages.[1] However, Alonso would manage to keep the German racer in sight as the field settled down, and would fend off Massa's clumsy challenge on lap eight that resulted in the Brazilian youth destroying his tyres via a spin.[1]

The first round of stops for the leaders opened on lap fifteen as Schumacher dived into the pits, with Alonso stopping four laps later.[1] He rejoined behind the German ace as Montoya briefly led, while Räikkönen had become a major threat for victory having opted for a one-stop strategy, moving into third once Montoya stopped.[1]

Räikkönen's eventual stop left him behind Montoya and Button, before the second round of stops ultimately settled the majority of the positions.[1] Indeed, Alonso would be the main beneficiary as he jumped Schumacher to claim the lead, running side-by-side into the first corner having made his stop.[1]

With that Alonso was clear, and duly claimed victory at a canter ahead of the man who many predicted would be his major rival.[1] Behind, the battle for third between Montoya, Button and Räikkönen was settled in the Finn's favour, the result of a better strategy, with Button just falling shy.[1] Montoya, meanwhile, would slip to a lonely fifth ahead of Webber, while Rosberg and Christian Klien claimed the remaining points.[1]

Rosberg would also make history by setting fastest lap, becoming the youngest driver to do so at the age of 20 years and 258 days.[1] This would stand until Max Verstappen set his maiden fastest lap at the 2016 Brazilian Grand Prix.

The full entry list for the 2006 Bahrain Grand Prix is outlined below:

The full results for the 2006 Bahrain Grand Prix are outlined below:

Victory at the opening round of the season meant Fernando Alonso opened his maiden title defence in perfect form, scoring a maximum ten points. Michael Schumacher, meanwhile, had started his campaign in second, two behind, while Kimi Räikkönen completed the opening day top three. The rest of the scorers in Bahrain were Jenson Button, Juan Pablo Montoya, Mark Webber, debutante Nico Rosberg and Christian Klien.

In the Constructors Championship it was Renault who led the way after the opening round, all because of Alonso's win. Indeed, McLaren-Mercedes had matched the French squad's ten point haul at the opening round, but because Alonso had won the race, it was Renault who headed the field on countback. Behind, Ferrari started the season in third ahead of Honda, with Williams-Cosworth and Red Bull-Ferrari having also scored points.