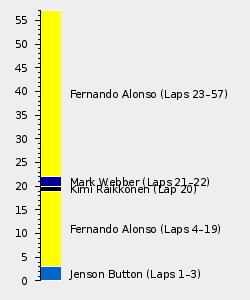 The 2006 Australian Grand Prix, officially the LXXI Foster's Australian Grand Prix, was the third round of the 2006 FIA Formula One World Championship, which took place at the Albert Park Circuit in Melbourne, Australia, on 2 April 2006.[1] The race, which was staged on the 80th birthday of Australia's three-time World Champion Jack Brabham, would see Fernando Alonso sweep to his second win in the opening three rounds.[1]

As a result of the 2006 Commonwealth Games being held in Melbourne the Australian Grand Prix would be staged in April, and hence lost its status as the opening round of the season.[1] That brought an end to a ten year streak since 1996 that the season had started in the Antipodean city, although the organisers would sign a renewed deal to return as the opening round in 2007.[1]

Into the race weekend itself and qualifying threw up a slight shock as Jenson Button grabbed pole position for Honda, their first as a constructor since the 1968 Italian Grand Prix.[1] Giancarlo Fisichella shared the front row with the Brit ahead of Renault teammate Alonso, while Kimi Räikkönen completed the second row.[1]

Confusion then arrived on raceday, with Juan Pablo Montoya spinning at the end of the formation lap, and so was forced to start at the back.[1] However, a stall for Fisichella on the grid saw the initial start aborted, and hence allowed Montoya to retake fifth on the grid.[1]

The second attempted start would go as planned, with Button easing away from Fisichella and Alonso, with Räikkönen watching on.[1] Behind, however, there would be more chaos, as new Ferrari driver Felipe Massa tried to go for a gap between Nico Rosberg and Christian Klien, resulting in the Ferrari getting smashed against the outside wall at turn two.[1]

That accident ensured the Safety Car was called at the end of the opening lap, and would stay out until the start of lap three.[1] Alonso duly went on to ace the restart and jump Button for the lead, having inherited second when Fisichella spun on cold tyres behind the #12 Honda.[1]

However, as soon as the field were released they were to be reined back in by the SC, which was called upon again after Klien crashed heavily at Clark Corner.[1] Likely a legacy of his clash with Massa and Rosberg at the start, the Red Bull-Ferrari had a suspected suspension failure, and was hence pitched straight into the barriers at high speed.[1]

Once Klien's ruined Red Bull was removed the race restarted for a second time, with Alonso bursting clear ahead of Räikkönen, who pounced on Button into the first corner.[1] With that the race would quickly become a procession, with the only change to the order coming when Vitantonio Liuzzi pulled a stunning move on Michael Schumacher at the back of the top ten.[1]

Indeed, it was only when Button, Montoya and Jarno Trulli kick started the first pit-phase that the race gained some interest, with Alonso and Räikkönen stopping a lap later.[1] That hence promoted Mark Webber into a brief lead for Williams-Cosworth, becoming the first Australian to lead his home race since it had become a World Championship race.[1]

Unfortunately for Webber his moment in the sun was curtailed swiftly by a gearbox failure, handing the lead back to Alonso.[1] Again, the race settled down once the stops were completed, until Schumacher's race came to a spectacular end with a crash at Prost, bringing out the SC once again.[1]

This time the majority of the field poured into the pits for their second stops, although this time there would be no major changes to the order.[1] Alonso hence took the restart still in the lead ahead of Räikkönen, although before the field was up to speed the SC was called out again, this time for Liuzzi destroying his Toro Rosso-Cosworth at Whiteford.[1]

The race restarted for a fourth and final time on lap 40, with Alonso powering away for the rest of the afternoon to claim victory ahead of Räikkönen.[1] Ralf Schumacher, meanwhile, would emerged from a wave of late retirements, which included an electrical shutdown for Montoya and a last corner engine failure for Button, to complete the podium.[1] Nick Heidfeld, Fisichella, Jacques Villeneuve, Rubens Barrichello and Scott Speed secured the remaining points, with Button falling ten metres shy of the finishing line in his smoking Honda.[1]

There would be one final twist, however, as Speed was relegated to ninth after the race for failing to slow sufficiently under yellow flags.[1] He hence lost his maiden points finish, and received a $5,000 fine for abusive language during the hearing.[1]

The race would also be notable as the last Grand Prix until the 2015 Mexican Grand Prix that neither Ferrari was classified.

Victory for Giancarlo Fisichella would catapult the Italian racer up the early Championship table, leaving Malaysia in fourth with ten points. However, it was his teammate Fernando Alonso who left Sepang at the head of the pack, and with a fairly ominous seven point lead after just two races. Michael Schumacher had remained as the Spaniard's closest challenger in second, ahead of third placed Jenson Button on countback.

In the Constructors Championship Renault were attempting to make an early break away at the head of the field, and left Malaysia with 28 points to their credit. That left the French manufacturer thirteen clear of Ferrari in second, who were level on points with third placed McLaren-Mercedes. Honda and Williams-Cosworth then completed the top five, with BMW Sauber and Toyota having picked up their first points of the campaign.

The full entry list for the 2006 Australian Grand Prix is outlined below:

The full qualifying results for the 2006 Australian Grand Prix are outlined below:

Fernando Alonso won for the second time in 2006, after Jenson Button's Honda blew up at the final corner, after starting from pole. Scott Speed was docked his first point (and what would have been the first for an American since 1993) for ignoring yellow flags. Thus, David Coulthard was promoted to eighth. Speed was also fined $5000 for swearing at Coulthard during the hearing.

It was not until 2016 that America ended its long wait for F1 points in the form of U.S. team Haas.

The full results for the 2006 Australian Grand Prix are outlined below:

A second victory in the opening three rounds left Fernando Alonso in early command of the Championship, having left Australia with 28 points to his name. That translated into a fourteen point lead over teammate Giancarlo Fisichella in second, with the Italian racer level on points with third placed Kimi Räikkönen. Behind, Michael Schumacher and Jenson Button remained tied on eleven points, with fifteen drivers on the score sheet.

In the Constructors Championship Renault had already built a comfortable lead at the head of the pack, leaving Australia with more than a race's worth of points in hand. Indeed, McLaren-Mercedes had slipped nineteen behind the French squad as a result of the battle of Australia, but had moved eight clear of Ferrari in third. Honda, meanwhile, had retained fourth ahead of BMW Sauber, with eight constructors having scored across the opening three rounds.

Retrieved from "https://f1.fandom.com/wiki/2006_Australian_Grand_Prix?oldid=87824"
Community content is available under CC-BY-SA unless otherwise noted.