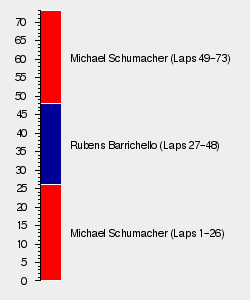 The 2005 United States Grand Prix, otherwise known as the XXXIV Foster's United States Grand Prix, was the ninth race of the 2005 FIA Formula One World Championship, staged at the Indianapolis Motor Speedway in Indiana, USA, on 19 June 2005.[1] The race proved to be among the most controversial in F1 history, as Michael Schumacher led just five other cars throughout the race.[1]

The cause of the controversy would be an accidents for Ralf Schumacher and Ricardo Zonta in practice, caused by a failure of their Michelin tyres on the banking.[1] The French tyre manufacturer then approached the FIA, track organisers and rivals Bridgestone to find a compromise, with negotiations going on through to race morning.[1]

In the mean time, qualifying would see Michelin shod Jarno Trulli claim pole position for Toyota, ahead of Kimi Räikkönen.[1] Indeed, the top four would all qualify on Michelin tyres, with Michael Schumacher the best of the six Bridgestone shod drivers down in fifth.[1]

Into race morning and Michelin's group of runners had provided various solutions, but could not reach a compromise with the FIA or Ferrari.[1] These included putting a chicane on the entry to turn thirteen, allowing Michelin runners to change tyres mid-race but not score points, and to change the race to a non-Championship round, with Michelin shod drivers using an alternate track layout.[1]

However, all of those proposals were rejected, despite all fourteen of the Michelin runners lining up on the grid.[1] However, all of the seven team principles agreed to withdraw from the race, with their drivers duly diving into the pitlane and their pit garages at the end of the formation lap.[1]

With that just the two Ferraris, the two Jordan-Toyotas and the two Minardi-Cosworths lined up on the grid, amid a chorus of boos and shouts from the crowd.[1] Regardless, the race was officially started with Schumacher streaking ahead of teammate Rubens Barrichello, while the two Jordans battled to the Minardis.[1]

With just six cars on track, and two of them representing the reigning World Champions, there was little surprise that there was next to no on-track action.[1] Indeed, within ten laps Schumacher and Barrichello had already built enough of an advantage to pit without dropping behind the Jordans, while the 100,000 strong crowd had already dispersed.[1]

There would only be one on-track pass throughout the race, with Christijan Albers taking fourth from Narain Karthikeyan.[1] That position would be reversed during the first round of stops, with Tiago Monteiro easing into a lonely third place and looking set for his maiden podium finish.[1]

The second half of the race saw Barrichello almost challenge Schumacher for the lead as the duo completed their second stops, with the German ace exiting the pitlane alongside the Brazilian.[1] Ultimately, Barrichello was run wide onto the grass by his teammate as they battled with Schumacher romping away from that moment on.[1]

With that the race was over, with Schumacher cruising home ahead of Barrichello, while Monteiro claimed a little bit of history by becoming the first Portuguese driver to claim a podium finish.[1] Karthikeyan, Albers and Patrick Friesacher completed the points as the entire field finished, although it was a very quiet IMS when the drivers made the trip to the podium.[1]

Victory for Kimi Räikkönen ensured that the Finn had closed the gap back to Fernando Alonso at the head of the Championship, although the Spaniard still enjoyed a fair lead. Indeed, Alonso left Canada having failed to score, but with twelve points in hand over Räikkönen, with the pair set to duel for the title over the rest of the season. Behind, Jarno Trulli slipped ten off of Räikkönen in third, Nick Heidfeld retained fourth, while Michael Schumacher broke into the top five.

In the Constructors Championship it had been a strong day for McLaren-Mercedes, although they were still shy of Renault's 76 point tally. The Anglo-German alliance would hence leave Canada thirteen off the French squad, with an identical margin keeping them ahead of Williams-BMW and Toyota. The latter duo had both ended the eighth weekend of the season on 47 points for the campaign, Williams-BMW ahead on countback, while Ferrari completed the top five, just two points behind.

The full entry list for the 2005 United States Grand Prix is outlined below:

The full qualifying results for the 2005 United States Grand Prix are outlined below: 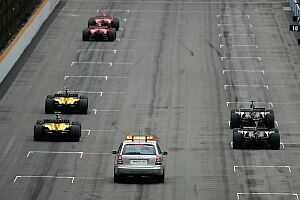 Note: Only six grid slots were filled at the start of the race, due to 14 cars withdrawing at the end of the parade lap.

The full results for the 2005 United States Grand Prix are outlined below:

Victory for Michael Schumacher in a sparse IMS ensured that the German ace was in title contention, having moved into third. However, he was still 25 points shy of Fernando Alonso in the lead, but was just three off of Kimi Räikkönen who had lacked the fortune of his competitors. Elsewhere, Rubens Barrichello had also made ground to move into fourth ahead of Jarno Trulli, with 21 drivers now on the board.

In the Constructors Championship it was Renault who continued to lead the away, leaving the US having not raced, but with 76 points. McLaren-Mercedes were next having also failed to race in the US, while Ferrari had moved into third, level on 63 points with the Anglo-German alliance. Behind, Williams-BMW and Toyota were still tied on 47, while Jordan-Toyota and Minardi-Cosworth had added their names to the score sheet.