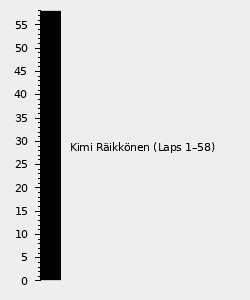 The 2005 Turkish Grand Prix, otherwise known as the I Türkiye Grand Prix'si, was the fourteenth round of the 2005 FIA Formula One World Championship, staged on 21 August 2005 at Istanbul Park in Istanbul, Turkey.[1] The race would see Kimi Räikkönen secure a dominant victory for McLaren-Mercedes, reinforcing his bid for the Championship crown.[1]

Qualifying had seen Räikkönen begin his domination of the inaugural Turkish Grand Prix in fine form, sweeping to pole position by a quarter of a second.[1] Giancarlo Fisichella was his closest challenger for Renault, just ahead of Championship leader Fernando Alonso, while Juan Pablo Montoya secured fourth in the #10 McLaren.[1]

The start of the race saw Räikkönen make a strong start, although Fisichella out muscled the Finn on the brakes for the first corner and hence claim the lead.[1] Alonso, meanwhile, would fend off the attentions of Montoya into the first corner, while Felipe Massa got out of shape on the brakes and hit Nick Heidfeld.[1]

Having lost out at the start Räikkönen would go on the offensive, and duly dived back past Fisichella at turn nine, although the Italian ace only gave-up on the lead on the brakes for the final chicane.[1] Alonso almost followed the Finn through but hung back, with Montoya looming in his mirrors.[1]

With that the top four were away, with Räikkönen able to build an advantage over Fisichella, until the Italian racer swapped places with teammate Alonso.[1] Yet, despite having been released by his teammate the Champion-elect could do nothing about Räikkönen, whose lead continued to grow throughout the early stages.[1]

Indeed, after that the race would prove to be fairly tame, aided by the fact that Alonso was the first of the leaders to stop on lap thirteen.[1] With that Räikkönen was able to pit without losing the lead, while teammate Montoya moved through to second courtesy of Alonso's early stop and a refuelling rig problem for Fisichella.[1]

The fight for victory effectively over attention turned to those running further down the field, with Jenson Button the main entertainment.[1] Indeed, the Brit would compete a series of overtakes to climb from thirteenth to sixth, before engaging Jarno Trulli in a brief duel for fifth.[1]

Elsewhere, Red Bull-Cosworth found themselves in a fight with Takuma Sato and the two Ferraris, until Michael Schumacher crashed out having tried to aggressively deny Mark Webber a move.[1] Webber himself would ultimately retire after a series of right-rear punctures, with a similar ailment also ending the race of Williams-BMW teammate Heidfeld.[1]

With that the race seemed to be over, until Montoya lapped Tiago Monteiro with three laps to go, but left the Jordan-Toyota next to no room.[1] As a result the Jordan duly smacked into the back of the McLaren and tipped it into a spin, allowing Alonso to sweep through to secure second.[1]

That, ultimately, proved to be the final piece of action as Räikkönen, unaware of his teammate's late drama, cruised across the line to secure victory.[1] Alonso was second to limit the Finn's damage to his Championship lead, Montoya completed the podium, while Fisichella was a distant fourth.[1] Button would eventually beat Trulli in the pitlane to secure fifth, while the two Red Bull-Cosworths rounded out the points, David Coulthard ahead of teammate Christian Klien.[1]

The full entry list for the 2005 Turkish Grand Prix is outlined below:

The full qualifying results for the 2005 Turkish Grand Prix are outlined below:

The full results for the 2005 Turkish Grand Prix are outlined below:

Kimi Räikkönen continued his push for the 2005 World Championship with his fifth win of the season, leaving him 24 points off the lead. Indeed, by finishing second Championship leader Fernando Alonso had minimised the damage Räikkönen had done to his lead, with those two effectively now in a duel for the title. Indeed, third placed Michael Schumacher had slipped 40 points behind, with just 50 left on the table for the remaining five races.

In the Constructors Championship Renault had retained their lead, although McLaren-Mercedes were becoming an ever looming threat, and with a seemingly quicker car. Indeed, the Anglo-German alliance had cut the French squad's advantage to just nine points in Turkey, as those two, like their lead drivers, set about duelling for the crown. Third placed Ferrari were no realistically too far back to challenge, with Toyota and Williams-BMW completing the top five.