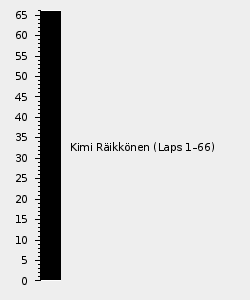 The 2005 Spanish Grand Prix, officially the XLVII Gran Premio Marlboro de España, was race number five of the 2005 FIA Formula One World Championship, which took place at the Circuit de Catalunya in Barcelona, Spain, on 8 May 2005.[1] The race would see Kimi Räikkönen narrowly denied a maiden Grand Chelem, claiming victory having led every single lap of the race.[1]

Qualifying had seen the Finn start his weekend in fine form, claiming pole position ahead of Mark Webber of Williams-BMW.[1] Home hero and Championship leader Fernando Alonso would hence have to start from third, with Ralf Schumacher sharing the second row.[1]

Räikkönen duly made a strong start to claim an early lead as the field sprinted off the grid, while Webber made a mess of his getaway.[1] That allowed Alonso and Ralf Schumacher to charge ahead of the Williams, although neither were able to challenge the flying Finn out-front.[1]

Indeed, the only thing that would halt Räikkönen's early blitz would Bernd Mayländer in the Safety Car, who was called upon within moments of the start.[1] The cause would be the two Minardi-Cosworth, with identical software failures meaning the two cars were stranded at the back of the grid.[1]

After two laps the race resumed, with Räikkönen again blasting clear of Alonso, who was simply unable to match the McLaren-Mercedes' pace.[1] The Spaniard was hence left to consolidate second, as Juan Pablo Montoya went through a full pirouette in seventh while battling Giancarlo Fisichella.[1]

The first retirements of the race came shortly before the first pitwindow, as Vitantonio Liuzzi and Patrick Friesacher spun into the gravel at the same corner on consecutive laps.[1] The second Minardi of Christijan Albers joined them on the sidelines a few laps later with a gearbox failure, as Webber became the first pit caller of the afternoon.[1]

The Australian racer's early stop ensured that he lost even more ground, the team swapping to a two-stop from a three and hence had to load more fuel.[1] He hence dropped back behind Jarno Trulli and Giancarlo Fisichella, as Räikkönen set a series of new fastest laps to hold a huge eighteen second lead.[1]

Indeed, Alonso would only manage to escape the attentions of the two Toyotas after the first stops, but found himself behind teammate Fisichella.[1] However, the Italian's hopes of a podium would be ruined when he made an unexpected pit call, with the team unable to diagnose an issue that the Italian reported.[1]

Michael Schumacher was another major winner of the first round of stops, leaping into fourth, only for a positive race to be curtailed by a suspension destroying puncture.[1] The second round of stops, meanwhile, would go on around the German racer's dramas, with Räikkönen again able to build on his lead, Alonso able to consolidate second, while the two Toyotas of Trulli and Ralf Schumacher battled to complete the podium.[1]

With that the race was run, with Räikkönen cruising through the closing stages to claim his first win of the campaign.[1] Alonso was next ahead of a battle scarred Trulli, who had kept Ralf Schumacher at bay, while Fisichella swarmed back up to fifth and secured fastest lap to deny Räikkönen a Grand Chelem.[1] Webber was next ahead of Montoya, while David Coulthard secured the final point in eighth.[1]

BAR-Honda would not attend the race as they were serving the first part of their two-race ban for breaking fuel use/ballast rules.[1]

The full entry list for the 2005 Spanish Grand Prix is outlined below:

The full qualifying results for the 2005 Spanish Grand Prix are outlined below:

The full results for the 2005 Spanish Grand Prix are outlined below:

A second place finish in front of his home crowd was enough for Fernando Alonso to extend his Championship lead, moving onto 44 points after the opening five races. Jarno Trulli had slipped eighteen behind the Spaniard as a result, while Kimi Räikkönen had moved into third, some 27 points off the lead. Elsewhere, Giancarlo Fisichella and Ralf Schumacher had made way for the Finn as they completed the top five, with seventeen drivers on the score sheet.

In the Constructors Championship Renault had managed to eek out their lead once again, leaving Spain with eighteen points in hand. Toyota remained their closest challengers, although Räikkönen's triumph meant that McLaren-Mercedes had moved to within three of the Japanese manufacturer. Williams-BMW were next in fourth ahead of Ferrari, while Red Bull-Cosworth and Sauber-Petronas rounded out the scorers.

Retrieved from "https://f1.fandom.com/wiki/2005_Spanish_Grand_Prix?oldid=87539"
Community content is available under CC-BY-SA unless otherwise noted.