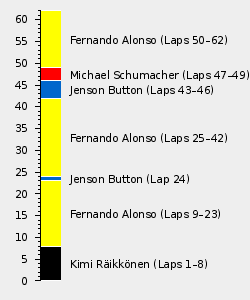 The 2005 San Marino Grand Prix, officially known as the XXV Gran Premio Foster's di San Marino, was the fourth race of the 2005 FIA Formula One World Championship, which took place at the Autodromo Enzo I Dino Ferrari on 24 April 2005.[1] The race, which was the 25th San Marino Grand Prix to be staged, would see Fernando Alonso and Michael Schumacher duel for victory in the closing stages.[1]

Qualifying for the San Marino Grand Prix would once again see the pecking order revised, as Kimi Räikkönen emerged with pole position ahead of Alonso.[1] Jenson Button was next ahead of Mark Webber, while Schumacher would start down in thirteenth.[1]

The start of the race would see Räikkönen's McLaren-Mercedes instantly leap into the lead, swatting away Alonso's small lunge into turn two.[1] Behind, Schumacher made next to no ground with an okay start, holding onto his thirteenth place grid position as the field largely got away in grid order.[1]

Räikkönen went on to dominate the opening stages of the race establishing a fair lead over Alonso to suggest that he was on a very light fuel load.[1] Alonso himself, meanwhile, was easing clear of Button's BAR-Honda, while Schumacher began to move up the field after some early retirements.[1]

Indeed, Giancarlo Fisichella was the first significant driver to retire for Renault, before a driveshaft failure dumped Räikkönen out of contention.[1] That handed the lead to Alonso on lap nine, with the Spaniard now in total control with a comfortable lead over Button.[1]

Into the first pit-window and Schumacher had found himself stuck in a train of cars behind Jarno Trulli, and would only make ground when others stopped ahead of him.[1] Yet, once the Italian racer did pit Schumacher, now the only driver stuck in the queue, was able to deliver two quick laps to jump everyone else in the battle, emerging in in fourth behind Alexander Wurz.[1]

Out front, meanwhile, Alonso would briefly lose the lead to Button during their first stops, but would regain his comfortable margin when the Brit pitted.[1] However, the second stint would be all about Schumacher's pace, with the German ace reeling in Button's BAR, prompting Alonso to make an early second stop to cover.[1]

Schumacher duly caught and passed Button two laps before the Brit stopped, and hence led the race for three laps before making his final stop.[1] The #1 Ferrari duly rejoined the race in second with twelve laps to go, and quickly set about demolishing what remained of Alonso's lead.[1]

The final eight laps of the race would have the tifosi on their feet, with Schumacher's scarlet Ferrari weaving around in Alonso's mirrors in hopes of forcing a move.[1] His best opportunities came at Tosa in the closing stages, as well as a couple of lunges at Acqua Minerale, although the #5 Renault would remain stubbornly ahead.[1]

Indeed, after one more lunge at Variante Alta on the final lap the race was run, with Alonso fending off the scarlet Ferrari to secure his third win in a row.[1] Behind, Button would finish a distant third only to be disqualified for having an underweight car, meaning Wurz completed the podium.[1] Jacques Villeneuve, Trulli, Nick Heidfeld, Webber and debutante Vitantonio Liuzzi claimed the remaining points.[1]

After the race BAR appealed their double disqualification, citing a fuel system anomaly, and received a date for an FIA tribunal on 5 May.[2] However, the tribunal used BAR's defence to hand the team a two race ban for a "highly regrettable negligence and lack of transparency", as using fuel as ballast was against F1's rules.[2]

Two wins and a second place for Fernando Alonso in the opening three rounds had left the Spaniard atop the Championship as the European season approached, leaving Bahrain with 26 points. That translated into a ten point advantage over second placed Jarno Trulli, with the Italian racer six ahead of Giancarlo Fisichella in third. Behind, Ralf Schumacher and David Coulthard completed the top five, level on nine, with fourteen drivers on the score board.

In the Constructors Championship Renault continued their early-season break away at the head of the pack, departing Sakhir on 36 points and a nine point advantage. Toyota had remained their closest challengers, while McLaren-Mercedes had moved into third, and just managed to stay within a race weekend's worth of points of the early leaders. Behind, Williams-BMW moved into fourth ahead of Red Bull-Cosworth, while Ferrari slipped to sixth.

The full entry list for the 2005 San Marino Grand Prix is outlined below:

The full qualifying results for the 2005 San Marino Grand Prix are outlined below:

The full results for the 2005 San Marino Grand Prix are outlined below:

Victory for the third race in a row left Fernando Alonso in command of the Championship, leaving San Marino with 36 points. Jarno Trulli remained his closest challenger but had slipped sixteen behind, while Giancarlo Fisichella was over two and a half races worth of points off his teammate. Instead, the Italian racer now shared ten points with Michael Schumacher, but was ahead courtesy of his win in Australia, while Nick Heidfeld headed a quartet of drivers with nine points.

In the Constructors Championship it was Renault who continued to lead the way, eking out their advantage once again to sit seventeen clear of their nearest rivals. Toyota were those main challengers, although they were coming under increasing pressure from McLaren-Mercedes in third. Behind, Ferrari had moved level with Williams-BMW to inch closer to the front, while BAR-Honda's post-race disqualification had denied them their first points of the campaign.

Retrieved from "https://f1.fandom.com/wiki/2005_San_Marino_Grand_Prix?oldid=87492"
Community content is available under CC-BY-SA unless otherwise noted.