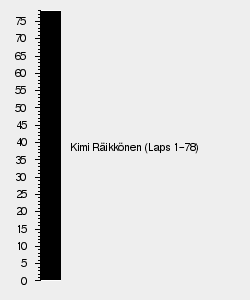 The 2005 Monaco Grand Prix, otherwise formally known as the LXIII Grand Prix de Monaco, was the sixth round of the 2005 FIA Formula One World Championship, staged at the Circuit de Monaco in Monte Carlo, Monaco, on 22 May 2005.[1] The race would see Kimi Räikkönen claim his second straight victory, moving him into title contention behind Fernando Alonso.[1]

Qualifying, which would be the last to feature cumulative times, would see the Finn emerge on pole position, beating Alonso by less than a tenth.[1] Mark Webber was next for Williams-BMW ahead of Giancarlo Fisichella, while Michael Schumacher in the #1 Ferrari started down in eighth.[1]

The start of the race would largely dictate the result, as Räikkönen and a fast starting Alonso duelled off the line.[1] Ultimately, it was the #9 McLaren-Mercedes that emerged ahead of the #5 Renault, as Webber dropped to fifth after making yet another poor start.[1]

The rest of the opening lap proved fairly tame, with Räikkönen and Alonso breaking away, while Fisichella fended off Jarno Trulli.[1] At the back, meanwhile, Juan Pablo Montoya was undermining the belief that no one could overtake in Monte Carlo, having scythed past the two Minardi-Cosworths and the two Jordan-Toyotas.[1]

After that the race settled into a steady rhythm, with Räikkönen and Alonso exchanging a barrage of fastest laps, before the Finn established a lead.[1] Behind, Fisichella managed to keep pace with his teammate, while Trulli had a train of cars behind him, until the race was halted by Christijan Albers.[1]

Indeed, the Dutchman had spun and blocked the track at Mirabeau, resulting in Schumacher removing his front wing on the back of David Coulthard.[1] The Safety Car was called upon for two laps as the debris, and Albers' stalled Minardi, were dragged away.[1] During that intervention, the two Renaults, Williams-BMWs and Felipe Massa all dived into the pits, leaving Räikkönen ahead of Trulli.[1]

Once the SC came in Räikkönen blasted clear, with Alonso now stuck in traffic in third midfield.[1] However, moments later the SC was almost called upon again, with Patrick Friesacher crashing out exiting the tunnel, although most of his Minardi ended up in the escape road opposite the Nouvelle Chicane.[1]

With no need to call the SC Räikkönen continued to build his lead, and would make his one and only stop of the race on lap 42, and would rejoin without losing it.[1] Behind, Trulli lost more ground, while Alonso was struggling badly with his tyres, and hence had the two Williams-BMWs glued to his tail.[1]

Elsewhere, Fisichella was likewise struggling with his Michelin tyres, and hence had a long queue of cars stuck behind him, including the two Ferraris, the two Toyotas, and the two Sauber-Petronases.[1] Ultimately, Fisichella would be shuffled down the order, while Jacques Villeneuve made an awful lunge at teammate Massa in the Saubers, resulting in the pair clashing at Sainte Devote.[1]

Out front, meanwhile, Alonso was risking everything to keep the two Williams at bay, and duly slipped behind Heidfled when the German racer sold him a dummy into the Nouvelle Chicane.[1] Webber then lined up a move on the Spaniard, with the pair twice scrambling over the Nouvelle Chicane, before the Australian racer finally clinched third.[1]

With that the race was run, with Räikkönen, untroubled by all the action behind, able to cruise through the final half of the race to claim victory.[1] Heidfeld and Webber duly completed the podium ahead of Alonso, while Montoya battled his way up to fifth.[1] Ralf Schumacher was next ahead of his brother Michael, while Rubens Barrichello secured the final point.[1]

This race was the second of a two-race ban for BAR-Honda after they were excluded from the results of the 2005 San Marino Grand Prix.[1]

A second place finish in front of his home crowd was enough for Fernando Alonso to extend his Championship lead, moving onto 44 points after the opening five races. Jarno Trulli had slipped eighteen behind the Spaniard as a result, while Kimi Räikkönen had moved into third, some 27 points off the lead. Elsewhere, Giancarlo Fisichella and Ralf Schumacher had made way for the Finn as they completed the top five, with seventeen drivers on the score sheet.

In the Constructors Championship Renault had managed to eek out their lead once again, leaving Spain with eighteen points in hand. Toyota remained their closest challengers, although Räikkönen's triumph meant that McLaren-Mercedes had moved to within three of the Japanese manufacturer. Williams-BMW were next in fourth ahead of Ferrari, while Red Bull-Cosworth and Sauber-Petronas rounded out the scorers. The Red Bull-Cosworth cars were advertised with the film, Star Wars: Episode III Revenge of the Sith.

The full entry list for the 2005 Monaco Grand Prix is outlined below:

The full free practice results for the 2005 Monaco Grand Prix are outlined below:

The full qualifying results for the 2005 Monaco Grand Prix are outlined below:

The full results for the 2005 Monaco Grand Prix are outlined below:

Despite failing to finish on the podium for the first time in 2005, Fernando Alonso had once again extended his lead, leaving Monte Carlo on 49 points. Race winner Kimi Räikkönen, meanwhile, had moved into second, but was left some 22 points adrift on the Spaniard in-spite of his second consecutive win. Behind, Jarno Trulli slipped a point behind the Finn, while Mark Webber and Nick Heidfeld completed the top five.

In the Constructors Championship it was still advantage Renault, although their lead had come down after the efforts of McLaren-Mercedes. Indeed, the two squads were separated by twelve points leaving Monaco, down from Renault's former eighteen point lead. Behind, Toyota had made way for McLaren, slipping eight behind, while it was status quo for the rest of the scorers.