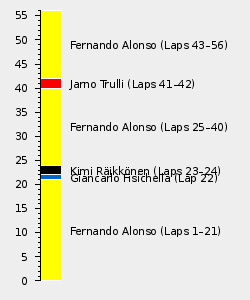 The 2005 Malaysian Grand Prix, otherwise formally known as the VII Petronas Malaysian Grand Prix, was the second round of the 2005 FIA Formula One World Championship, staged at the Sepang International Circuit in Sepang, Malaysia, on 20 March 2005.[1] The race would see Fernando Alonso claim his first victory of the season in dominant fashion, defeating former teammate Jarno Trulli.[1]

Despite complaints after the opening round in Australia, cumulative qualifying would return in Malaysia, and would see Alonso secure pole position for Renault.[1] Trulli subsequently got his Toyota alongside the Spaniard, while Australia winner Giancarlo Fisichella secured third ahead of Mark Webber.[1]

Amid the familiar Malaysian conditions of humidity and heat the race would start very cleanly, with Alonso streaking ahead of Trulli to secure the lead.[1] Behind, Jenson Button, Nick Heidfeld and Rubens Barrichello all made some early progress, diving through the midfield into the first corner after poor quali-performances left them at the back of the field.[1]

Unfortunately for Button he and teammate Anthony Davidson would retire very early on, both suffering engine failures in spite of taking fresh Honda engines in their BARs ahead of the race.[1] Button's demise would also remove Patrick Friesacher from the race as he slipped on the Honda's oil while, out front, Alonso set a series of fastest laps to leave an all Italian scrap for second between Trulli and Fisichella.[1]

The fight for second would only be interrupted by the first round of stops, with Alonso and Trulli stopping on lap 21 to leave Fisichella in a temporary lead.[1] He stopped on the following tour to hand the lead to Kimi Räikkönen, who duly delivered two new lap records before diving into the pits himself.[1]

That late push put the Finn into fourth ahead of Webber and Ralf Schumacher, although is race was soon curtailed by a puncture, that sent the McLaren-Mercedes sliding off the circuit.[1] He eventually limped back to the pits with the entire tyre missing, rejoining in a lowly thirteenth having lost almost a full lap.[1]

As the second stint developed it became clear that the Sepang circuit was punishing the tyres, with Fisichella the big victim as he picked up several blisters.[1] Trulli and Ralf Schumacher were also notable blistered battlers, although while Trulli held onto a secure second, Fisichella would drop back into the sights of Webber's Williams-BMW.[1]

Webber moved into striking position several laps later, although his lunge at turn thirteen only allowed Schumacher to nose alongside, while Nick Heidfeld joined the fight.[1] Schumacher then lunged at the Williams into turn fourteen and ran the Australian wide, a move which also caused Heidfeld to lose time.[1]

However, Heidfeld still had momentum, and an excellent double tow allowed him to pass Schumacher into turn one, only for the German racer to retaliate and take fifth back at turn four.[1] However, Schumacher would run wide during the next battle and hand the position to Heidfeld, who subsequently fled up the road to catch teammate Webber, just as the Aussie lined up another attack on Fisichella.[1]

This time Fisichella would defend aggressively, resulting in contact at the final corner that left both cars out of the race with damage.[1] Heidfeld hence slipped through to claim third ahead of Schumacher, with the second Toyota's pace deteriorating rapidly as the race wore on.[1]

With that the race was run, with Alonso remaining unchallenged through the second round of stops to claim victory ahead of Trulli, who claimed Toyota's maiden podium finish.[1] Heidfeld survived well to complete the podium, while Schumacher's fading tyres allowed Juan Pablo Montoya to sweep past the Toyota for fourth late on.[1] The remaining points went to David Coulthard, a quiet Michael Schumacher and Christian Klien.[1]

The full entry list for the 2005 Malaysian Grand Prix is outlined below:

The full qualifying results for the 2005 Malaysian Grand Prix are outlined below:

The full results for the 2005 Malaysian Grand Prix are outlined below:

Fernando Alonso moved to the top of the Championship after his victory in Malaysia, leaving Sepang with sixteen points to his name. Teammate Giancarlo Fisichella made way for him, dropping to second after his retirement, while Jarno Trulli had leapt into third after his podium finish. The Italian racer headed a quartet of drivers on eight points, with twelve drivers on the score sheet.

In the Constructors Championship Renault had continued to build their early advantage, moving onto 26 points after Alonso's triumph. Toyota, meanwhile, had streak straight into second after their maiden trip to the podium, a point ahead of Red Bull-Cosworth in third. The Austrian rookies were themselves a point ahead of Ferrari and Williams-BMW, while McLaren-Mercedes were a further point behind as the final scorers.

Retrieved from "https://f1.fandom.com/wiki/2005_Malaysian_Grand_Prix?oldid=87484"
Community content is available under CC-BY-SA unless otherwise noted.