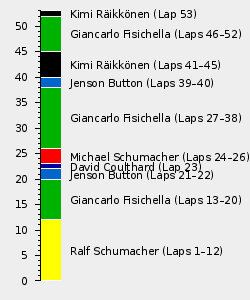 The 2005 Japanese Grand Prix, officially the XXXI Fuji Television Japanese Grand Prix (XXXI フジテレビ日本グランプリ in Japanese) was the eighteenth and penultimate round of the 2005 FIA Formula One World Championship, staged on 9 October 2005 at the Suzuka Circuit in Mie Prefecture, Japan.[1] The race would see Kimi Räikkönen claim arguably his greatest race victory, overtaking race leader Giancarlo Fisichella on the final lap.[1]

Qualifying had resulted in an incredibly mixed grid, with Räikkönen, freshly crowned Champion Fernando Alonso and former Champion Michael Schumacher all qualifying at the back of the field due to changing conditions.[1] They would line up in seventeenth, sixteen and fourteenth respectively, while Juan Pablo Montoya failed to set a time at all.[1]

With four quali-aces at the back Ralf Schumacher was left to claim pole position for Toyota at their home race, ahead of a Honda powered BAR in the hands of Jenson Button.[1] Fisichella would claim third ahead of Christian Klien of Red Bull-Cosworth, while Takuma Sato started his home race in fifth.[1]

The start of the race saw Ralf Schumacher sprint into an early lead, leaving Button to try and fend off a fast starting Fisichella.[1] Behind, Sato's hopes were ended when he clashed with Rubens Barrichello, leaving both with damage, while Räikkönen, Alonso and Montoya made early progress, streaking up the order.[1]

However, Montoya's race would ultimately prove to be a short one, with the #10 McLaren-Mercedes crashing out at the end of lap one after being forced off track by Jacques Villeneuve.[1] That resulted in an appearance for the Safety Car as Montoya escaped unharmed, while Villeneuve was slapped with a time penalty.[1]

The restart saw Ralf Schumacher again make a strong getaway, with Fisichella also opening out a gap over Button.[1] Behind, Alonso had to twice hand back a position to Klien after accidentally passing the Austrian racer by cutting the chicane, allowing Räikkönen to close right onto his tail.[1]

Once clear of Klien both Alonso and Räikkönen would charge onto the back of Michael Schumacher, just as the first pitstops were beginning.[1] Ralf Schumacher was the first of the leaders to stop, handing a comfortable lead to Fisichella, while Alonso lined-up a stunning move on the #1 Ferrari.[1]

Running lighter than both Michael Schumacher and Räikkönen, Alonso would throw everything he had at the #1 Ferrari, opening an opportunity at 130R.[1] The Spanish ace duly danced his Renault right around the outside of Schumacher's car on lap 20, a move that would be fondly remembered as the greatest in the Japanese Grand Prix's history.[1]

A lap later and Alonso made his first stop, followed a couple of laps later by first Schumacher and then Räikkönen.[1] They duly rejoined ahead of Alonso, who had got caught behind David Coulthard, with Räikkönen immediately attacking and passing Schumacher to move into fourth.[1]

Räikkönen spent the rest of the second stint hunting down Button and Mark Webber, in second and third, catching them just as they ventured into the pits.[1] Fisichella also stopped to leave Räikkönen in the lead, with the Finn duly delivering a bunch of fastest laps in clear air before making his stop.[1]

That push meant that the Finn emerged from the pits just five seconds behind Fisichella, although with time running out.[1] Behind, Alonso was able to battle past Coulthard, Schumacher and Button to challenge Webber, while Button slipped back towards Schumacher and Coulthard.[1]

With three laps to go Fisichella began to defend, and hence allowed Räikkönen to twice draft alongside him into the first corner only to fend off the Finn's lunge.[1] However, at the start of the final lap Räikkönen was able to sell the Italian racer a dummy, sweeping around the outside of the Renault through turn one to claim the lead.[1]

That proved to be the decisive move, with Räikkönen sprinting away to secure victory ahead of the Italian.[1] Behind, Alonso managed to elbow his way past Webber to complete the podium, and ensure that Renault moved back ahead of McLaren-Mercedes in the Constructors Championship ahead of the season finale in China.[1] The rest of the points would go to Webber, Button, Coulthard, Schumacher and Ralf Schumacher.[1]

Third place in Brazil was enough for Fernando Alonso to claim the 2005 FIA Formula One World Championship with two rounds to spare, ending the weekend on 117 points. His closest challenger Kimi Räikkönen had technically closed the gap, although he was still 23 points behind with only twenty points to fight for. The Finn hence had to settle for second, as behind Juan Pablo Montoya moved ahead of Michael Schumacher on countback.

In the Constructors Championship McLaren-Mercedes had moved ahead of Renault at the head of the pack, and could therefore claim the crown in Japan. Indeed, should the Anglo-German alliance outscore Renault by sixteen points in Suzuka then they would claim the crown, while Renault would take the lead heading into the finale if they outscored McLaren by three. Elsewhere, Ferrari had moved seventeen points clear of Toyota in third, while Williams-BMW were set to finish in fifth.

The full entry list for the 2005 Japanese Grand Prix is outlined below:

The full qualifying results for the 2005 Japanese Grand Prix are outlined below:

The full results for the 2005 Japanese Grand Prix are outlined below:

Victory for Kimi Räikkönen meant that the Finn closed the gap to Fernando Alonso atop the Championship, although with the Spaniard having already been declared Champion that was little more than a footnote. Behind, Michael Schumacher had moved back ahead of Juan Pablo Montoya in the fight for third, establishing a two point advantage, while Giancarlo Fisichella had closed in on both in fifth. That was the only major fight remaining in the Drivers' Championship heading into the season finale, with Räikkönen already guaranteed second place.

In the Constructors Championship Renault had overturned McLaren-Mercedes' two point lead to claim a two point lead of their own, meaning there would still be a crown to be awarded in China. It would likely be winner takes all in the season finale, with a one-two for either team enough to see them lift the trophy. Behind, Ferrari had mathematically secured third ahead of Toyota, who were likewise set to finish fourth ahead of Williams-BMW.

Retrieved from "https://f1.fandom.com/wiki/2005_Japanese_Grand_Prix?oldid=87761"
Community content is available under CC-BY-SA unless otherwise noted.