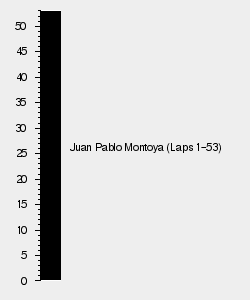 The 2005 Italian Grand Prix, officially the Formula 1 Gran Premio Vodafone d'Italia 2005, was race number fifteen of the 2005 FIA Formula One World Championship, which took place at the Autodromo Nazionale Monza in Monza, Italy on 4 September 2005.[1] The race was won by McLaren-Mercedes driver Juan Pablo Montoya with Championship leader Fernando Alonso of Renault in second.[1]

Montoya's teammate and title pretender Kimi Räikkönen had been the man to beat in qualifying, although a ten place grid penalty meant that the Finn was unable to start on pole position.[1] That meant that Montoya would head the field on the grid, with Alonso promoted onto the front row of the grid.[1]

Räikkönen's hopes of victory were further dented by a poor start, for he slipped behind Jacques Villeneuve with a cautious getaway.[1] Out front, meanwhile, Montoya got the jump on Alonso to lead into the Rettifilo, with the rest of the field pouring through the first chicane in their wake.[1]

In the midst of the crowd David Coulthard would clip the back of Giancarlo Fisichella and break his front wing, while Mark Webber did the same on the back of Coulthard's Red Bull-Cosworth.[1] Christijan Albers, meanwhile, would be caught out by Narain Karthikeyan as the Indian racer's Jordan-Toyota suddenly changed lines into the chicane, resulting in the Minardi-Cosworth pitching the Jordan into a spin.[1]

Into the early stages and Montoya was able to escape up the road from Alonso, the McLaren showing tremendous straight-line speed.[1] Alonso himself, meanwhile, was soon able to escape the attentions of Jenson Button, sat in a lonely third, while Jarno Trulli found himself fighting with the Ferraris for fourth, with Michael Schumacher only able to pass the Toyota after cutting the first chicane.[1]

Räikkönen, meanwhile, would remain stuck behind Villeneuve's Sauber-Petronas outside the top ten, and would only be released when the Canadian ace followed the Ferraris into the pits on lap fourteen.[1] Now clear, however, Räikkönen would deliver a series of stunning laps, in the midst of which he would set a new record for highest top-speed achieved in a Grand Prix at 370.1 km/h (230.0 mph).[1]

Indeed, the Finn would benefit massively during the first pit-phase, becoming the last man to stop to leap up ahead of Button, the Ferraris, Trulli and the rest of the top ten to move into third.[1] He would also briefly battle with Alonso, before his single stop just shy of half-distance dropped him back down to fifth behind Trulli.[1]

However, Räikkönen would see his hopes of a podium, and the World Championship, shredded moments after leaving the pitlane, as a tyre failure caused his left-rear tyre to fall apart at Lesmo.[1] He duly charged around on three wheels to pit for a replacement, but dropped back behind Villeneuve to twelfth as a result.[1]

With Räikkönen out of the hunt attention turned to the second round of stops, although there would be little change to the order.[1] Indeed, the only change to the order would come via the antics of Antônio Pizzonia in the Williams-BMW, who battled his way into fourth before dropping back to seventh.[1]

Räikkönen would, however, have one last blast, barging through to fourth before hunting down Fisichella, in third, int he closing stages.[1] However, a spin at Roggia saw the #9 McLaren narrowly avoid beaching itself, and would leaving Räikkönen trailing Trulli.[1]

With that the race was effectively run, with Montoya cruising through the final laps to claim victory ahead of Alonso.[1] Fisichella completed the podium in third, well clear of Räikkönen, with Trulli and Ralf Schumacher trailing for Toyota.[1] Pizzonia was next to claim an impressive seventh on his Williams-BMW return, while Button could only muster eighth after his strong quali-run.[1]

This was the first race since the 1961 Dutch Grand Prix that all of the starting/qualifying drivers had finished, ending a run of 649 Grand Prix. This feat would not be repeated again until the 2011 European Grand Prix.

Kimi Räikkönen continued his push for the 2005 World Championship with his fifth win of the season, leaving him 24 points off the lead. Indeed, by finishing second Championship leader Fernando Alonso had minimised the damage Räikkönen had done to his lead, with those two effectively now in a duel for the title. Indeed, third placed Michael Schumacher had slipped 40 points behind, with just 50 left on the table for the remaining five races.

In the Constructors Championship Renault had retained their lead, although McLaren-Mercedes were becoming an ever looming threat, and with a seemingly quicker car. Indeed, the Anglo-German alliance had cut the French squad's advantage to just nine points in Turkey, as those two, like their lead drivers, set about duelling for the crown. Third placed Ferrari were no realistically too far back to challenge, with Toyota and Williams-BMW completing the top five.

The full entry list for the 2005 Italian Grand Prix is outlined below:

The full qualifying results for the 2005 Italian Grand Prix are outlined below:

The full results for the 2005 Italian Grand Prix are outlined below:

With four races to go the World Championship battle seemed to be over, for Fernando Alonso had managed to extend his lead to 27 points over Kimi Räikkönen. That meant that the Spanish ace could secure the title in Belgium if he out-scored the Finn by four points in Spa. Räikkönen, meanwhile, would have to beat Alonso in each of the four remaining races just to stand a hope of taking the crown, with those two the only drivers mathematically in the fight.

In the Constructors Championship it had been a fairly even day for the main protagonists, with McLaren-Mercedes only able to nudge a point closer to Renault's 144 point tally. Indeed, the Anglo-German squad were sat eight off the French manufacturer with four rounds to go, and were the only constructor feasibly capable of overhauling the French squad in 2005. Indeed, Ferrari were still mathematically in the hunt, but with a huge 58 point deficit to the leaders.