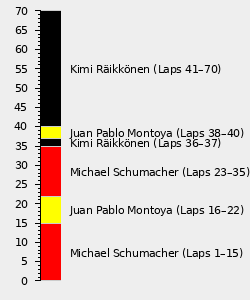 The 2005 Hungarian Grand Prix, otherwise known as the Formula 1 Marlboro Magyar Nagydíj 2005, was the thirteenth round of the 2005 FIA Formula One World Championship, staged at the Hungaroring near Budapest, Hungary, on 31 July 2005.[1] The race would see Kimi Räikkönen sweep to victory for McLaren-Mercedes, defeating Michael Schumacher in a strategy based duel.[1]

The race weekend itself would open with some major headaches for the F1 paddock, with a European-wide ban on tobacco advertising coming into force.[1] Five of the teams were backed by tobacco companies, with McLaren-Mercedes, Ferrari, BAR-Honda and Renault having them as title sponsors, meaning their revenue, and liveries, were to take a significant hit if they appeased the new laws.[1]

Ultimately McLaren and BAR were the only teams to appease the European court, with their West and Lucky Strike liveries disappearing on Saturday.[1] However, the Marlboro, Mild Seven and Benson & Hedges logos would remain on the Ferrari, Renault and Jordan cars throughout the weekend.[1]

Into the race weekend itself and Michael Schumacher caused a stir by claiming pole for Ferrari, suggesting he was on a low-fuel lead during qualifying.[1] This was backed up by the fact that Juan Pablo Montoya in second was almost a full second off the German's pace, while Jarno Trulli got his Toyota ahead of Räikkönen's McLaren.[1]

Soaring temperatures on raceday further enhanced Schumacher's hopes of victory, with the German racer duly acing the start to claim an early lead.[1] Montoya went with him but ultimately had to settle for second, while Räikkönen streaked ahead of Trulli to secure third.[1]

Räikkönen was a man on a mission on the opening lap, however, sweeping past Montoya for second before trying to latch onto Schumacher's tail.[1] Behind, Champion-elect Fernando Alonso received a front-wing knocking whack from Ralf Schumacher, while Rubens Barrichello tried to remove his front-wing on the back of Trulli's Toyota.[1] This, however, was trivial compared to Christian Klien's exit from the race, with the #15 Red Bull-Cosworth sent into a barrel roll by Jacques Villeneuve.[1]

As Klien climbed out of his ruined Red Bull unaided, Räikkönen did his best to eliminate Schumacher's lead, and would latch onto the Ferrari's exhaust as the leaders lapped Tiago Monteiro on lap four.[1] The pair then exchanged a series of fastest laps as they battled for the lead, before Räikkönen dived into the pits on lap eleven.[1]

Räikkönen's earlier-than-expected stop did not catch the Scuderia out, however, with Schumacher able to pit four laps later and resume with a comfortable lead over the Finn.[1] However, all of that had allowed a long-running Montoya to move into the lead, with the Colombian racer managing to eek out a lead over Schumacher and Räikkönen.[1]

Yet, Montoya's pace was not strong enough and so he would rejoin in third on lap 22 after making his stop.[1] That hence placed attention back on Schumacher and Räikkönen for the lead, with the pair once again exchanging a barrage of quick laps as the McLaren loomed large in the Ferrari's mirrors.[1]

They remained half a second apart until their second stops, with Schumacher the first to blink on lap 35, followed by Räikkönen a lap later.[1] That lap in clear air ultimately proved to be the break Räikkönen needed, with the Finn making a second on the defending Champion to rejoin on lap 36 at the de facto head of the field.[1]

With that Räikkönen was away, building an unassailable lead that meant he made his third and final stop without losing the lead to Schumacher.[1] The Finn was then able to nurse his McLaren to the chequered flag to claim victory, over half a minute clear of Schumacher's Ferrari.[1]

Indeed, it had been a tense final few laps for the German ace, for he would be caught at an impressive rate by younger brother Ralf in the #17 Toyota.[1] However, the elder brother held on by half a second to secure second, while Trulli, Jenson Button, Nick Heidfeld, Mark Webber and Takuma Sato claimed the rest of the points.[1]

The full entry list for the 2005 Hungarian Grand Prix is outlined below:

The full qualifying results for the 2005 Hungarian Grand Prix are outlined below:

Winner Kimi Räikkönen declined the traditional champagne spraying as a mark tribute to 29-year-old McLaren Tatworth chef Darren Hawker, who died on 27 July. Fell from the eighth floor of the Marriott Hotel in Budapest. It is not the first time that such an event has befallen F1. 1991 a Lotus mechanic died in similar circumstances at San Marino.

The full results for the 2005 Hungarian Grand Prix are outlined below: